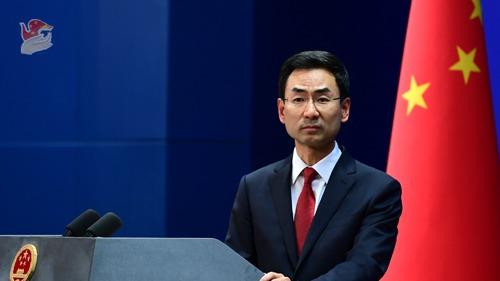 At a press conference in Beijing, Geng said that the SAR government had attentively listened to opinions from various sectors since February and made relevant changes to the proposed bill in response to public concerns.

Proposed amendments to the Fugitive Offenders and the Mutual Legal Assistance in Criminal Matters ordinances will be tabled at the Legislative Council’s full council meeting for the second reading on Wednesday.

If passed, the revised fugitive laws will enable Hong Kong to surrender fugitive offenders on a case-by-case basis to other jurisdictions having no formal or long-term agreements with the SAR.

As of Monday, about 845,000 people have signed a city-wide signature campaign, organized by a local alliance formed by prominent political, business and legal figures.

On Saturday, a spokeswoman for the United States Department of State expressed “concern” over the HKSAR government’s extradition bill, saying that continued erosion of the “one country, two systems” principle puts the SAR’s long-established special status in international affairs at risk.

But Geng said that since Hong Kong’s return to the motherland, the “one country, two systems” principle has been successfully implemented in the city while the SAR’s high degree of autonomy has been well-maintained.

Also responding to the US’ move, a spokesperson for the Foreign Ministry commissioner’s office in the HKSAR urged the US to keep out of Hong Kong affairs, which are China’s internal matters.

In a statement issued on Monday, the office expressed “strong disaffection” and “resolute opposition” over US intervention, which has “ignored international laws and the basic principles of international relations”.

Thus, the office urged the US to stop spreading such “unfounded” and “irresponsible” remarks and stop interfering in the HKSAR’s normal legislative process.

The office reiterated that the government’s amendments to the extradition laws, which are in line with international laws and practices, were proposed to plug legal loopholes, uphold social justice and improve the rule of law.

On Monday afternoon, several local organizations also condemned US intervention in the HKSAR’s affairs as they rallied outside the US consulate general in Central to protest the move.