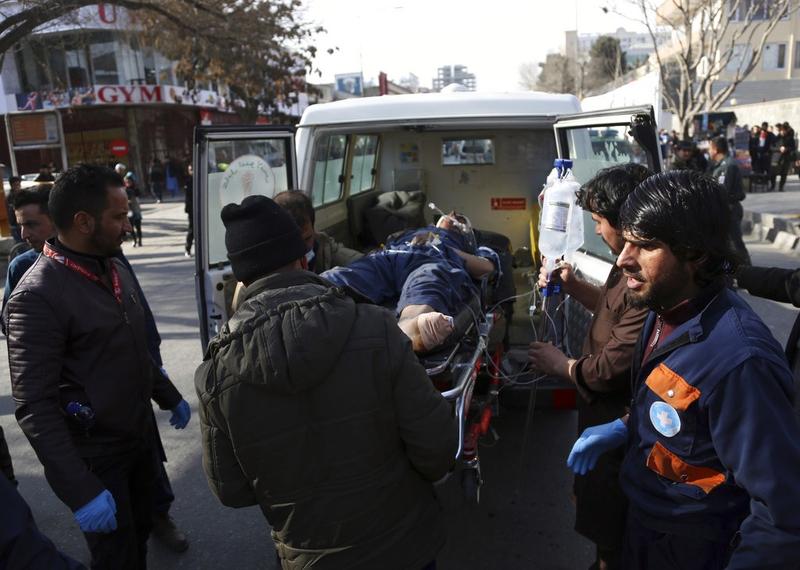 An injured man is moved by a stretcher outside a hospital following a suicide attack in Kabul, Afghanistan, Jan 27, 2018. (RAHMAT GUL / AP)

KABUL – A bomb hidden in an ambulance killed at least 95 people and wounded about 158 in the Afghan capital Kabul on Saturday when it blew up at a police checkpoint in a busy part of the city that was crowded with pedestrians.

The Taliban claimed responsibility for the suicide blast, a week after they claimed an attack on the Intercontinental Hotel in which more than 20 people were killed.

Saturday's explosion capped a violent week in Afghanistan, with the siege at the Intercontinental Hotel and another attack on an office of the aid group Save the Children in the eastern city of Jalalabad

An interior ministry spokesman blamed the Haqqani network, a militant group affiliated with the Taliban which Afghan and Western officials consider to be behind many of the biggest attacks on urban targets in Afghanistan.

As medical teams struggled to handle the casualties pouring in, some of the wounded were laid out in the open, with intravenous drips set up next to them in hospital gardens.

"It's a massacre," said Dejan Panic, coordinator in Afghanistan for the Italian aid group Emergency, which runs a nearby trauma hospital that treated dozens of wounded.

Hours after the blast, a health ministry spokesman said the casualty toll had risen to at least 95 killed and 158 wounded.

Saturday's explosion capped a violent week in Afghanistan, with the siege at the Intercontinental Hotel and another attack on an office of the aid group Save the Children in the eastern city of Jalalabad. That attack was claimed by Islamic State.

The wave of attacks has put pressure on President Ashraf Ghani and his US allies, who have expressed growing confidence that a new, more aggressive military strategy has succeeded in driving Taliban insurgents back from major provincial centers.

The United States has stepped up its assistance to Afghan security forces and increased its air strikes against the Taliban and other militant groups, aiming to break a stalemate and force the insurgents to the negotiating table.

However, the Taliban have dismissed suggestions they have been weakened by the new strategy, and the past week has shown their capacity to mount deadly, high-profile attacks is undiminished, even in the heavily protected center of Kabul.

Washington, which has accused Pakistan of giving assistance to the Taliban and has cut off some aid to Islamabad, urged all countries to take "decisive action" to stop the violence.

"There can be no tolerance for those who support or offer sanctuary to terrorist groups," Secretary of State Rex Tillerson said in a statement.

In a statement, President Donald Trump condemned the attack and said it "renews our resolve and that of our Afghan partners."

Pakistan, which denies the accusations, condemned the attack and called for "concerted efforts and effective cooperation among the states to eradicate the scourge of terrorism." 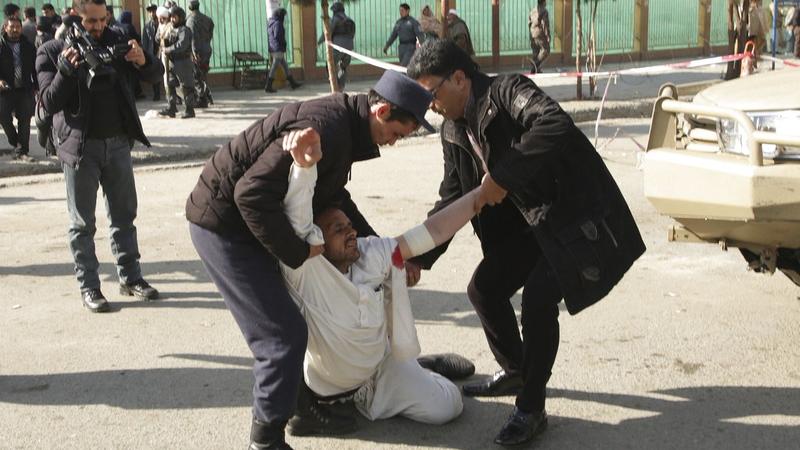 A wounded man is assisted at the site of a car bomb attack in downtown Kabul, Afghanistan, Jan 27, 2018. The attack near embassies killed at least 40 people, officials said. (MASSOUD HOSSAINI / AP)

Saturday is a working day in Afghanistan and the streets were full when the blast went off at around lunchtime in a busy part of the city close to shops and markets and near a number of foreign embassies and government buildings.

Mirwais Yasini, a member of parliament who was near the blast, said an ambulance approached the checkpoint and blew up, having passed through another checkpoint further down the road.

The target was apparently an Interior Ministry building but the victims were mainly people who happened to be in the street.

Buildings hundreds of meters away were shaken by the force of the blast, which left torn bodies strewn on the street amid piles of rubble, debris and wrecked cars.

"Today's attack is nothing short of an atrocity," Tadamichi Yamamoto, head of the United Nations Assistance Mission in Afghanistan, said in a statement, adding that those behind it must be brought to justice.

The casualty toll is the worst since 150 people were killed in a huge truck bomb explosion last May near the German embassy. That attack prompted a major reinforcement of security aimed at preventing similar vehicle-borne assaults.

Security officials said further attacks were likely and security was tightened around potential targets in the city.

But with much of central Kabul already a heavily fortified zone of high concrete blast walls and police checkpoints, there were angry questions about how the bomber got through. 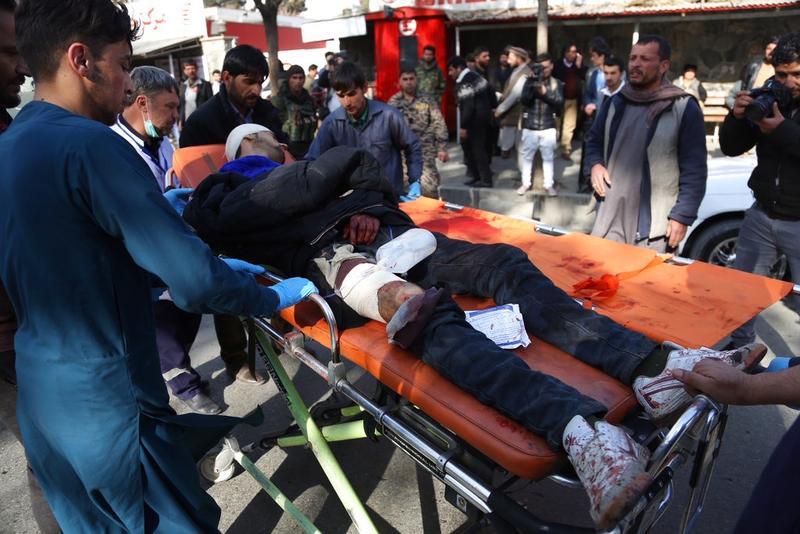 People helped walking-wounded away as ambulances with sirens wailed through the traffic-clogged streets of the city center.

"I was sitting in the office when the explosion went off," said Alam, an office worker whose head was badly cut in the blast. "All the windows shattered, the building collapsed and everything came down."

The Swedish and Dutch embassies as well as the European Union mission and an Indian consular office are also nearby but there were no reports that any staff were hurt.