Land mine clearing effort pays off 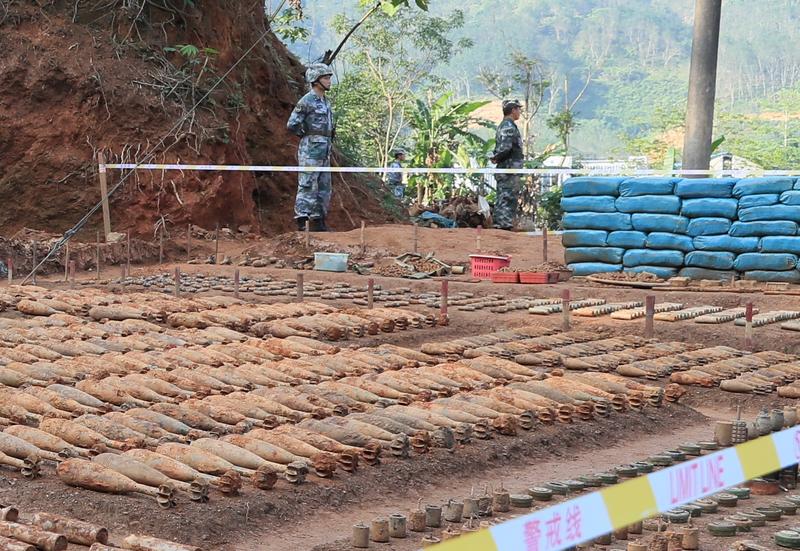 Land mines and explosives are displayed at a ceremony marking the end of a mine-clearing mission in Malipo county, Yunnan province. (YANG MENG / FOR CHINA DAILY)

A brigade that cleared unexploded mines from more than 6 hectares of land in Yunnan province handed the area over to the local government on Monday, China National Radio reported.

The commander of the Yunnan mine clearance brigade's fourth unit said it had found and defused about 8,200 mines and explosives

The commander of the Yunnan mine clearance brigade's fourth unit, which was in charge of the mission, said it had found and defused about 8,200 mines and explosives, as well as 7 metric tons of metal fragments in a five-month operation.

The edge of the minefield, near the port of Tianbao, in Malipo county, which borders northern Vietnam, was less than 100 meters from the residences.

It was the scene of fierce fighting during the border conflict between China and Vietnam in 1979. It was Yunnan's most complex and dangerous minefield.

Because of the proximity of the mines to people's homes and the dense vegetation that had grown over them, the unit had to be particularly careful during removal.

Jiang Yunxiu, who lives near the cleared field, suffered shrapnel injuries when a grenade exploded when she was 7 years old. "I've been scared ever since," Jiang said. "Knowing that the soldiers have cleared the minefield, I am relieved at last."

The Malipo government announced at the handover ceremony that the newly cleared land will be the site of a new hospital.

The successful mission was part of a larger mine-sweeping initiative launched in November 2015 that has cleared a total of 2,300 hectares. Another 1,500 hectares are expected to be cleared this year.

Wang Xiaoyu contributed to this story.