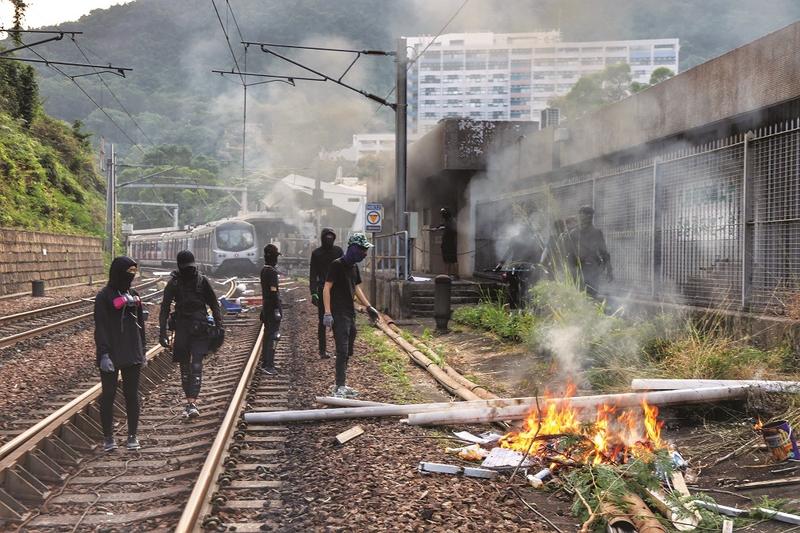 Rioters set fire near railway tracks at University MTR station while a train stops at the platform due to obstructions on the tracks. (PHOTO / CHINA DAILY)

A barrage of attacks on ordinary residents in Hong Kong, including an arson attack on a senior citizen on Monday, has sparked public outrage at radical protesters who vented their anger on people not agreeing with their actions.

As of Wednesday noon, more than 1.15 million Hong Kong residents have taken a stand by signing an online petition, calling for more rigorous law enforcement to curb the escalating violence that has sat the city “on the brink of total collapse”. 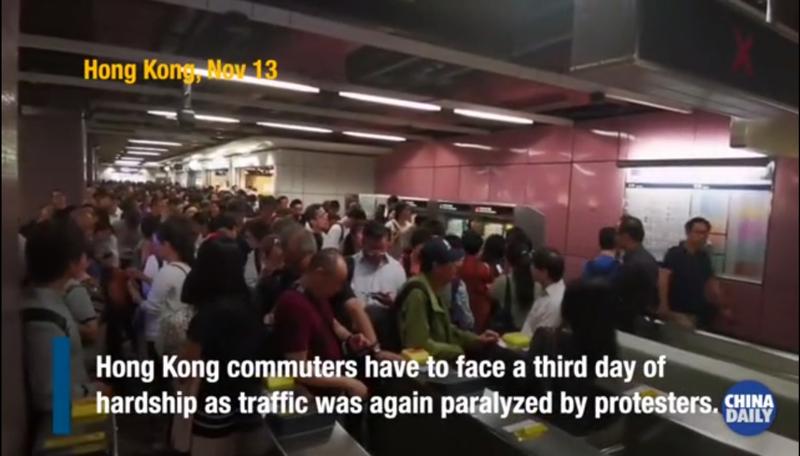 The most stunning case since the “Extradition Bill Incident” began in June saw a 57-year-old man doused with gasoline and set ablaze by a black-clad man after a quarrel over political disputes.

Safeguard Hong Kong, a civic alliance consisting of lawyers, teachers, social workers and business people, has gathered tens of thousands of posts via the petition platform in support of the beleaguered police force.

“It’s a clear message from Hong Kong people — we’ve had enough of black violence,” said convener Kennedy Wong Ying-ho after he submitted the petition to the chief executive’s office.

“It is so ironic that those protesters, who claim to fight for democracy and freedom, are so intolerant of anyone with different views,” the solicitor told China Daily, citing the arson attack.

The online petition gives voice to Hong Kong’s silent majority worried about personal safety when speaking out against rioters who want to bring the government to its knees, said he.

A 35-year-old businessman, surnamed Chow, said it was not until he saw the man burnt on the street of his neighborhood that he decided to comment on his social media page.

“I stayed silent when they damaged shops and paralyzed traffic, making me unable to get to work,” he said. “But when I saw ordinary people repeatedly targeted, I know we will soon be forced into silence forever if we do not speak up now.”

The Hong Kong Police Force should be better empowered and protected by laws, especially when they are outnumbered, under considerable strain, and not much better equipped than those some of the protesters in full gear, said Wong.

Thousands of residents also petitioned the government to use all legal means other than “strong condemnations”. This includes invoking the Emergency Regulations Ordinance again to help the police quell the violence.

There have been more arrests and more prosecutions since the anti-mask law took effect. It has given the police one small advantage, though radicals continue to defy the law, said Wong, adding that curfew could be an option to contain the runaway violence.

However, the shortage of law enforcers undermines the effectiveness of the law and injunction orders, including a ban on releasing personal details of police officers and their families, he noted.

Despite mounting calls for the courts to hand down harsher sentences to deter rioters, Wong said judicial independence remains one of Hong Kong’s core values, while the government should appeal the sentences as current punishments are widely regarded as “too light”.

In light of the “black terror” and the strained police force, he called for the upcoming District Council elections to be rescheduled, saying there can be no fair polls if voters and candidates are exposed to threats and assaults.

Referring to the attempted murder of lawmaker Junius Ho Kwan-yiu who was stabbed in the chest during his campaign, Wong said nowhere in the world would go ahead with elections in what is effectively a state of emergency.

The government should postpone this very important political event until law and order is restored, he added.

During the past three days, university campuses have become the main battleground where the police confronted masked protesters who vandalized public and private property and hurled gasoline bombs.

On Monday, police made more arrests than those from last week combined. About two-thirds of the 287 arrested on Monday were students, according to police.

Describing the surging arrests and escalating violence as “very alarming”, Wong said deficiencies in legal education had contributed to the problem, as the city’s fundamental principle of the rule of law had been overturned.

Recalling his secondary school days in the United Kingdom where he had to take law exams, he suggested youngsters be better educated about the penalties they could face if they break the law.

Reviewing education is one thing; on the other hand, you need to show them how a punishment will affect them, he argued.