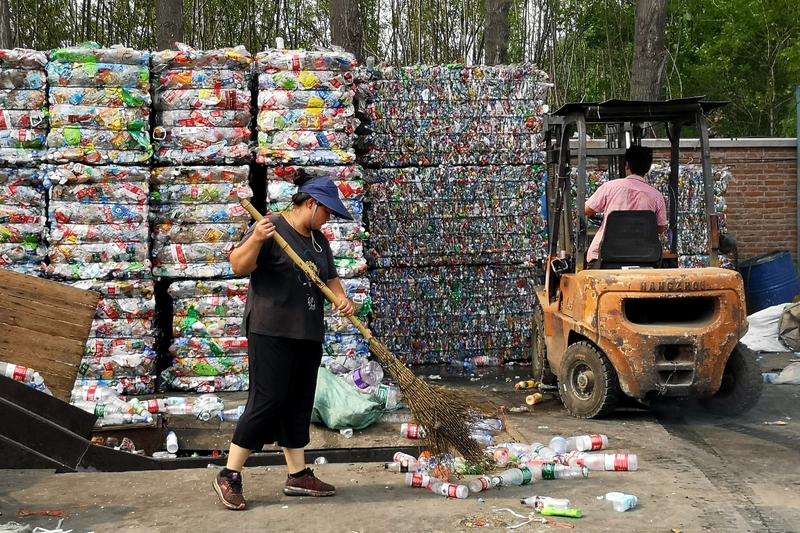 While bottles, cans and cartons may be trash to other people, they represent treasure for Chen Wanming.

"Although junkmen sometimes incorrectly mix different types of trash, the impact is less serious than that caused by indiscriminate garbage collection, landfill and incineration."

After getting up at 7 am and eating a couple of steamed buns with pickles for breakfast, Chen gets on his electric tricycle and rides around Beijing's Changping district collecting recyclable trash. Most days he covers more than 70 kilometers.

In 1996, Beijing became the first city in China to launch waste-sorting programs, but the effect was limited. Now, following in the wake of Shanghai, which on July 1 implemented compulsory sorting of domestic waste with the aim of making garbage disposal more efficient, the capital is preparing to enact legislation related to trash sorting.

Every day, junkmen ride around the capital collecting trash, which is sent to recycling centers. At the peak in 2014, there were more than 200,000 junkmen in Beijing, but few were locals. Like Chen, they mostly came from other parts of China.

After finishing high school in 1976, Chen started teaching Chinese in his hometown, Zhoukou city, Henan province. However, the monthly salary of 9 yuan meant he was unable to support his family, so he left in 1997 and joined Beijing's "junkman army".

"Tens of thousands of people from my hometown came to Beijing to collect waste. My wife came here a year earlier than me with a friend. This is a free job, without limits on the time you can work or the areas you can visit," the 63-year-old said.

Chen has no fixed routine. Instead, he rides around and keeps an eye out for recyclable trash. He usually carries two batteries as extra power for his electric tricycle.

Around 11 am every day, Chen visits recycling stations in Changping to sell the items he has collected. Then, he returns home for lunch and a nap timed to avoid the searing afternoon heat. He usually resumes his trash-collection duties at about 4 pm.

Chen has lived alone in a 10-square-meter rented room since his wife returned to Zhoukou to care for their grandchildren two and half years ago. He is not allowed to store waste in the room, so everything he collects has to be sold on the day.

Like most junkmen without a fixed income, Chen lives a simple life. His monthly expenses total about 1,800 yuan, including 360 yuan for rent, 70 yuan for electricity and 600 yuan for cigarettes. The rest is spent on food.

"Everything is expensive in Beijing; sometimes 7 yuan will not even buy me a decent breakfast. Last time I bought some steamed buns in a supermarket, they cost 2 yuan each, which is too expensive," he said.

Having lived in Beijing for 22 years, Chen has witnessed many changes, but he has chosen to stay, even though life is hard.

"I cannot find a proper job in my hometown, and I am used to my current lifestyle, which makes me feel a little bit freer," he said.

Wang Chao, from Gushi county, Henan province, runs a renewable resources recycling station in Changping. He started the business in 2004, when he arrived in the capital.

Eight people, including Wang and his wife, work at the station, which can deal with 2 to 3 metric tons of recyclable waste per day, mainly plastic bottles, cans and polyethylene film. 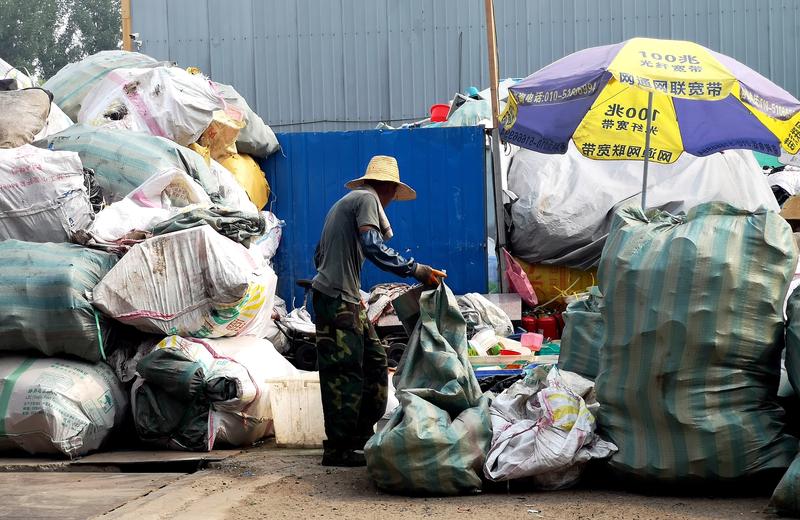 The 37-year-old said it takes 38,400 plastic 550 milliliter mineral water bottles to make 1 ton, and private recycling stations like his across Beijing can handle more than 6 million bottles per day.

Wang's station has two main channels for renewable waste supplies. The first is 150 trucks whose drivers are franchised by registered recycling companies. They collect waste in communities and waste stations, and sell the recyclable items to Wang. The second source is the more-than 60 junkmen like Chen, who have cooperated with him for a long time.

Chen said only a few people have a real understanding of garbage classification, which is a big problem because it results in them mixing different types of garbage, then dumping it at will.

"Repeated house decorating, excessive packaging and overuse of plastics cause too much garbage. Many people now disdain selling trash to make money, so they just throw out their recyclable and unrecyclable waste together," he added.

Since quitting her job in a factory for health reasons about 30 years ago, Beijing native Cheng Fang has collected recyclable waste for a living.

The 63-year-old used to ride a tricycle to collect trash in a radius of 20 km around her home, before selling it to stations. However, she had surgery on her right hip about six months ago, so now she is only active in her home community, earning 20 to 30 yuan a day.

She insists on sorting waste precisely, such as putting bottles and their caps into separate bags because they are made from different raw materials.

"I discovered that environmental pollution is serious, regardless of the waste in communities. I have often seen news reports about animals dying after eating plastic waste," she said. "Many people are unwilling to do the job, but I raised my daughter by collecting and selling waste when we faced hard times."

She has also felt pressured because her daughter doesn't like her choice of work. "We have argued about it twice－I think it is good, both for me and for the environmental, but she disagrees," Cheng said.

She recalled that about five years ago, there were five times the number of waste collectors like her on the streets, but the number has fallen dramatically.

Wang said the falling number of waste collectors has resulted in a corresponding decline in the volume of items arriving at his recycling center. In addition, most recycling stations are located in suburban areas, more than 50 km from the downtown, which few junkmen are willing to visit.

"Five years ago, Beijing had more than 200 stations like mine, but there are less than 100 now, and they are all located in remote areas," he said.

Wu Zixing, from Gushi county, Henan, buys waste from junkmen and residents to sell to stations. He also complained that business is hard.

The 38-year-old started his business in 2005. At 4:30 am every day, he drives to an intersection near densely populated communities in Dongcheng district, and leaves at 9 am having collected about 200 kilograms of recyclable waste.

"I was active in nearby communities for 14 years; many people here know me, and they often greet me in the morning. I can feel that the space for junkmen is shrinking."

On July 3, the Beijing Municipal Commission of Urban Management said the city will follow Shanghai's lead in garbage sorting. Beijing's classification criteria differ from those in its eastern rival－whose 24 million residents produce about 28,000 tons of household waste every day－but punishments for offenders will be more stringent. Moreover, plans to revise household waste management have been included in the city's 2018-20 legislative program.

According to the regulations in Shanghai, garbage must be divided into four categories: recyclable waste; kitchen waste; hazardous waste; and residual waste. Individual offenders can be fined 200 yuan, while the penalty can be as high as 50,000 yuan for companies.

Trash-sorting programs are being accelerated nationwide. In June, the Ministry of Housing and Urban-Rural Development said cities at prefecture level and above must begin work on full domestic waste classification this year.

In addition, 46 major cities must establish systems for dumping, collection, transportation and disposal, and they must be operational next year. Cities at prefecture level and above must have these systems in place by 2025.

Collecting garbage is not easy work, because there are different types of recyclable trash. Many junkmen have more than 10 years' invaluable experience of sorting trash, according to Wang, the recycling center owner. 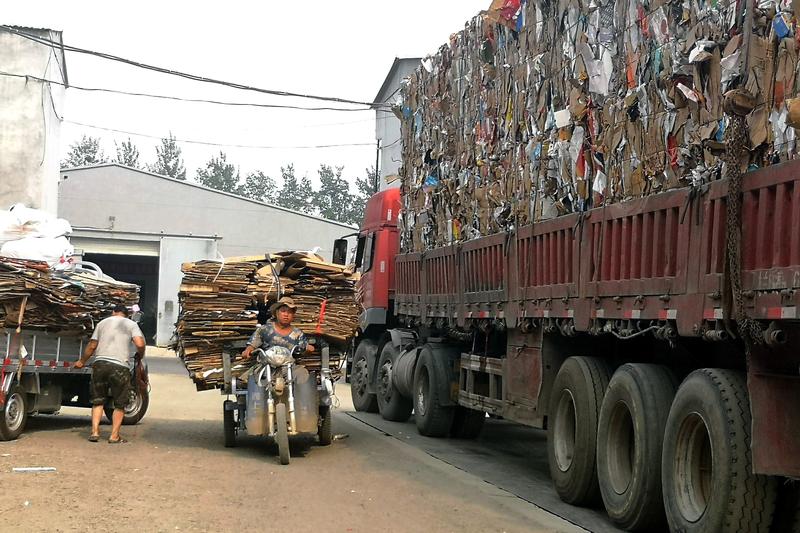 A waste collector uses a motor tricycle to bring items for sale to the station in Beijing's Changping district. (WANG ZHUANGFEI / CHINA DAILY)

"For instance, every day we collect more than 30 types of plastic. Experienced junkmen can separate them quickly, but those skills take years to learn," he said.

Wu said the departed junkmen contributed greatly to the capital's development: "As long as a city needs to develop, waste will be produced and will need to be dealt with. There is no such thing as a high-end or low-end crowd."

Chen Liwen, founder of Zero Waste Village, an NGO that focuses on environmental protection in Beijing and surrounding Hebei province, said that in 2014, during the peak for the city's junkmen, about 90 percent of the capital's recyclable waste was collected. Now though, both the number of junkmen and the amount of trash being collected are falling fast.

Having studied trash sorting and junkmen in Beijing for about 10 years, she believes the collectors' contribution to the city's development should not be overlooked.

"As society develops, every industry is divided into different skills, and the collectors' skills should be better utilized," she said.

That is exactly what is happening in Shanghai, where some communities have hired junkmen to help residents sort and dispose of garbage. They can earn 900 yuan a month, and take recyclable waste to sell as well.

"I have seen news reports about the wonderful idea of hiring junkmen to assist waste sorting. I think Beijing can learn from it or think about other effective ways to use these people in the city's development," Chen Liwen said, adding that the government should consider waste sorting and recycling comprehensively, from front-end recycling to packaging to transportation.

"The original recycling industry was formed organically, based on market need. Driving junkmen out of Beijing is squeezing and disrupting the rule of the market," she said.

She noted that the amount of waste generated in Beijing is rising every year, and the public environmental protection system has its limits.

Beijing produces nearly 26,000 tons of domestic waste every day, and its 29 garbage-disposal facilities are already operating at full capacity. Last year, 9.3 million tons of household waste were collected in the capital, according to local authorities.

The public environmental protection system in each district cannot handle waste across administrative boundaries, but freelance junkmen can, and they have ensured that a lot of recyclable waste is transferred ready for re-use, Chen Liwen said.

Junkmen have also eased the burden on sanitation workers, who are not allowed to collect renewable trash for sale. However, junkmen can remove large amounts of the recyclable trash produced by residents.

"I read in the newspaper that Beijing will soon implement garbage sorting. I don't know whether it will be good for the junkmen or not, but I hope they will be organized efficiently and put to good use."