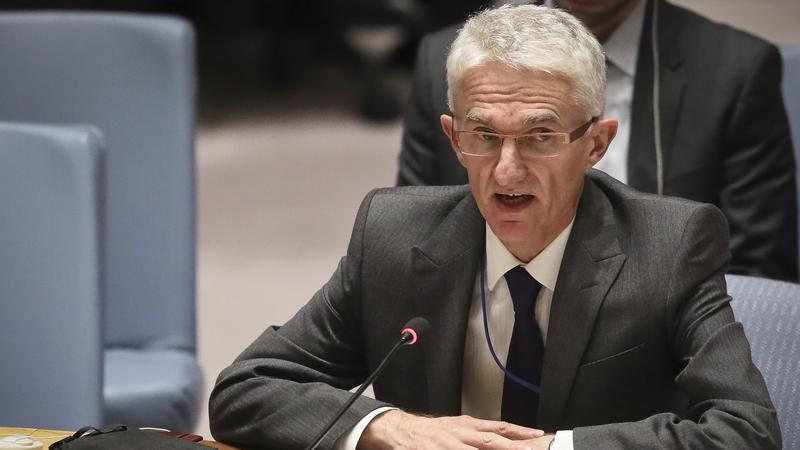 Mark Lowcock, the undersecretary-general for humanitarian affairs, said eight of Cameroon's 10 regions are affected by one of three concurrent humanitarian crises

Mark Lowcock told an informal Security Council meeting on the humanitarian situation in the central African nation that this means one in six Cameroonians need aid — more than half of them children.

The United States organized the informal meeting over objections from the council's three African members — and strong opposition from the Cameroonian government.

Cameroon is divided along lines created during colonialism by European powers and was first ruled by Germans and then divided among the French and British. As a result, there are English- and French-speaking regions, with English speakers estimated at about 20 percent of the population.

English-speaking separatists in the Northwest and Southwest regions allege years of marginalization by the government of the largely French-speaking country. President Paul Biya, in power since 1982, has branded the separatists as terrorists. Hundreds have been killed as fighters from a number of armed groups battle government forces and attempt to economically paralyze the regions.

Lowcock, the undersecretary-general for humanitarian affairs, said eight of Cameroon's 10 regions are affected by one of three concurrent humanitarian crises.

He said the situation in the Northwest and Southwest regions "has rapidly deteriorated" as a result of fighting, and "the level of the crisis today is more alarming than ever," and continues to deteriorate.

"In 2018, 160,000 people were estimated to need humanitarian assistance in the Northwest and Southwest regions," he said. "Today, there are more than 1.3 million people, or at least eight times as many, in need — and that amounts to a third of the local population."

He said a half million people are internally displaced and thousands of homes and entire villages have been destroyed across the two regions.

In the East and North regions, meanwhile, Cameroon is hosting more than 270,000 refugees from the conflict in Central African Republic, putting "a significant burden" on already very poor host communities, Lowcock said. And, he said, in the Far North region, which is affected by the Lake Chad basin crisis, about 1.9 million people, including at least 100,000 refugees from Nigeria, "need urgent assistance."

Lowcock said the biggest challenge is lack of funding, noting that last year the UN appeal for Cameroon was among the least-funded globally. This year, he said, the UN and non-governmental groups are seeking US$299 million to reach 2.3 million people, one-third of them in the Northwest and Southwest regions. So far, only US$38 million has been received.

Cameroon's UN ambassador, Michel Tommo Monthe, defended the government and denied it is provoking violence. He said it is engaging in dialogue with opposition figures, but he stressed that it must deal with separatism, "terrorism and insurrection — and we will face that."