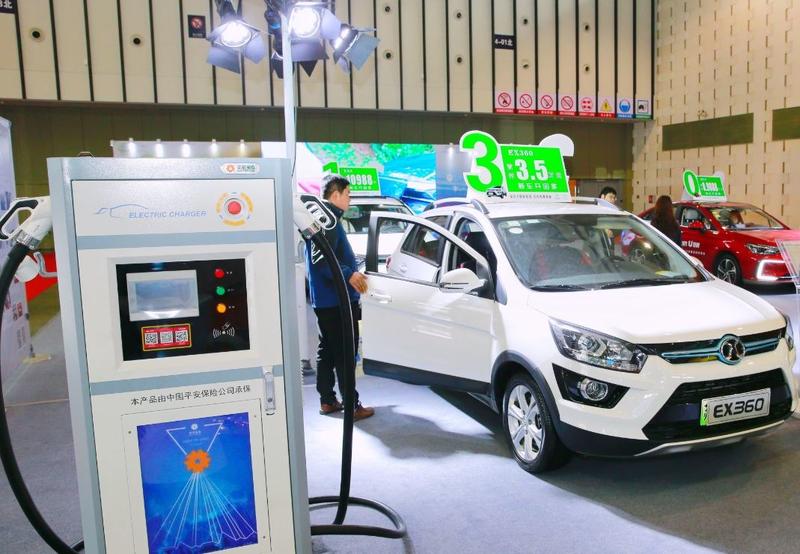 In this undated photo, consumers visit an exhibition of new energy vehicles in Nanjing, Jiangsu province, in March 2019. (CHENG JIABEI / FOR CHINA DAILY)

China is encouraging local authorities in regions with appropriate conditions to set up no-go zones for gasoline cars and use more new energy vehicles for public transport, which analysts and industry insiders say will help boost the industry's development.

"Regions with ripe conditions have our support if they establish trial projects to establish no-go zones for gasoline-powered vehicles and replace such vehicles with new energy vehicles in the urban public transport system," said the Ministry of Industry and Information Technology in a statement on its website on Tuesday.

The ministry said: "When success is achieved, we will coordinate different parties to study and formulate a plan to phase out gasoline-powered vehicles."

Regions with ripe conditions have our support if they establish trial projects to establish no-go zones for gasoline-powered vehicles and replace such vehicles with new energy vehicles in the urban public transport system.

It did not say the possible plan would be specific to certain parts of the country or a nationwide phase out.

"As China is to stop subsidies for new energy vehicles by the end of 2020, governments need to offer more convenience to drivers of such vehicles so that more people will buy them," he said.

Zeng said it also makes sense to replace buses and taxis with electric ones, especially in downtown areas, in terms of combating pollution.

However, he did not think it is necessary for China to come up with a nationwide ban in the short term. "I don't think it will be a reality until 2040 or even 2050," said Zeng.

Neil Wu, an auto analyst at consultancy firm Roland Berger, said the adoption of electric vehicles for buses is feasible because their fixed routes make it easier for them to get charged and their total ownership cost is cheaper than gasoline ones.

Some regions have already taken steps. In March, China's southern island province of Hainan said it will ban the sale of gasoline-fueled vehicles by 2030, in a bid to safeguard its environment.

All its vehicles used for sanitation, tourist transport and urban-rural passenger transit will be replaced by new energy vehicles by 2025, according to its plan.

Local authorities said they will further improve electric charging networks in the next three to five years to meet the needs of new energy vehicles.

Taiyuan, capital of North China's Shanxi province, had its gasoline taxis replaced by electric ones by 2016. Buses in Shenzhen, South China's Guangdong province, have been electric since 2017, and its taxis are expected to be electrified as well this year.

The Beijing municipal government is offering subsidies of up to 73,800 yuan (US$10,416) per vehicle if taxi owners will buy electric ones, according to a document released in July.

At a forum in July, BAIC Group Chairman Xu Heyi said all taxis in Beijing will become electric within three years. BAIC owns Beijing Electric Vehicle Co, which is the largest electric carmaker in the country.

A representative at BJEV said that as the subsidies are cut, the number of private owners may fall somewhat but the proportion of electric vehicles used such as taxis and ride-hailing vehicles will rise as they are cheaper to use than gasoline ones.

Carmakers have long stepped up their efforts in new energy vehicles. BAIC and Changan said in 2017 that they will phase out conventional fuel-powered cars by 2025.

Volkswagen plans to produce around 11 million electric cars in China by 2028. This is more than half of its global target of 22 million.

China started its new energy vehicles initiative in 2009 and overtook the United States in 2015 as the largest market for them in the world.

So far, there are around 3.5 million new energy vehicles on the country's roads. The figure is expected to reach 5 million by the end of 2020, according to the China Association of Automobile Manufacturers.