By Yuan Quan, Jing Huaiqiao and Quan Xiaoshu for Xinhua 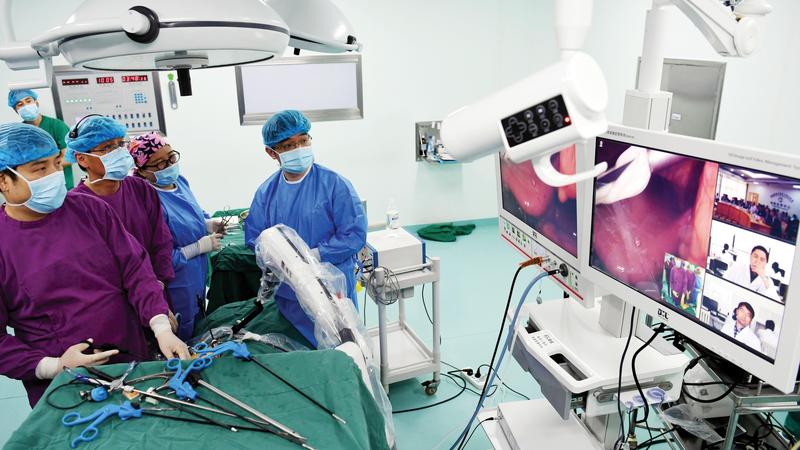 Surgeons at the People’s Hospital in Shitai county, Anhui province, conduct an operation with the help of their counterparts at the Second Hospital of Anhui Medical University, via a 5G-assisted medical services platform. (XU MINHAO / FOR CHINA DAILY)

The facility is pioneering the use of 5G-assisted medical services that enable its specialists to help with delicate operations being performed hundreds of kilometers away.

About 80 percent of China’s medical resources are concentrated in large cities, such as Beijing and Shanghai, and 80 percent of those resources are in big public hospitals, where patients flood in to see eminent physicians. That can lead to overcrowding and sometimes strains doctor-patient relations.

Guo believes telemedicine via superfast wireless technology will help tackle the problem by allowing more patients to receive high-quality treatment at clinics near their homes.

Guo, 54, is a tech fan. He wears an Apple Watch and speaks Cantonese to Siri on his iPhone.

Two months ago, he made headlines by using 5G technology via a live video stream to direct minimally invasive heart surgery on a patient 400 km away.

During the four-hour operation, Guo, head of his hospital’s cardiac surgery unit, sat in front of a big screen and gave instructions using a microphone and a 3D model of the patient’s heart. However, he wore a suit and tie, not traditional surgeon’s garb.

Guo said only four doctors in his team are capable of such surgery, but last year, the team performed more than 700 minimally invasive heart operations.

This sort of surgery is difficult, but demand is growing. Instead of a large incision, the operation is performed through tiny cuts in the patient’s chest. Moreover, the surgeons don’t saw through the breastbone, but operate between the ribs, which results in less pain and a faster recovery.

Before, Guo had to drive several hours to remote county hospitals to conduct operations, as well as to see patients in Guangzhou.

“About 70 percent of my patients are from outside Guangzhou,” he said. 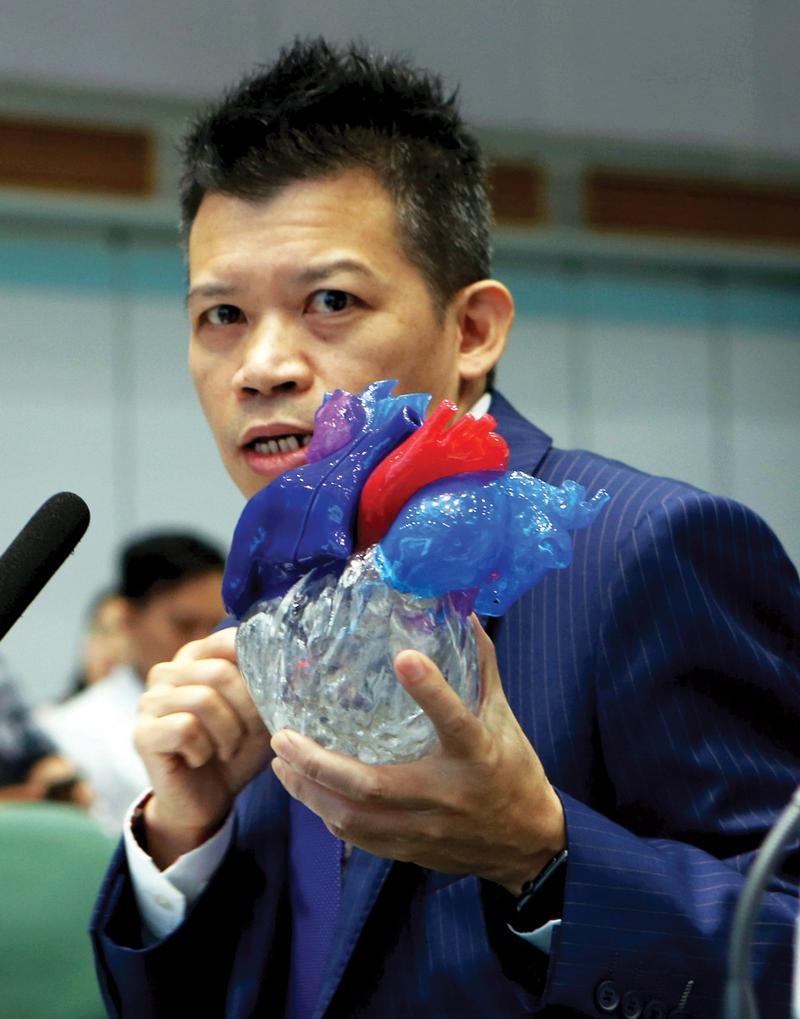 Yu Xueqing, president of the hospital, likened its outpatients’ hall to a crowded supermarket, because thousands of people pour in every day.

He said the congestion reduces patient satisfaction and increases the risk of infectious diseases, such as dengue fever. That is a major concern, because Guangdong experienced a serious outbreak of the rapidly spreading mosquito-borne illness five years ago.

For patients from distant rural areas, traveling while ill can be challenging and time-consuming. “Some die en route, unfortunately,” Yu said.

In the recent past, telemedicine was mainly conducted via phone or video. It was not common, mainly because the poor technology led to unstable signals, slow transfer speeds and low definition, which made it impossible for doctors to oversee procedures remotely.

“Before 5G, we dared not conduct remote surgery,” Yu said. “Even a time lag of just a few seconds between the devices and the surgeons’ actions could result in critical mistakes.”

With a data transfer speed at least 10 times faster than 4G technology, 5G has a time lag of just one-tenth of a second. It has helped to inject new vitality in county hospitals like the People’s Hospital of Gaozhou in southwestern Guangdong, which performed more than 100 minimally invasive operations last year.

Although excellent at treating cardiovascular diseases, the hospital still lags far behind provincial hospitals in terms of quality of treatment. For a recent operation on a 41-year-old female patient, the Gaozhou hospital invited Guo to provide advice and guidance in real time through its telemedicine platform.

Sitting in an operating room in Guangzhou, a six-hour drive from Gaozhou, Guo used a video marker to highlight an area of the patient’s body and told the lead surgeon to move the cutting point 3 centimeters higher to avoid damaging a nerve.

Without 5G technology, Guo would have had to freeze the image to draw, but the surgeon might have already moved on or been unable to see clearly, thereby missing Guo’s instructions.

Two weeks before the operation, Guo’s team used a 5G connection to build a 3D heart model using images provided via a computerized tomography, aka CT, scan, which produced a 360-degree view of the heart.

County hospitals are not capable of building 3D models. Previously, gigabyte-sized CT images had to be transferred between hospitals by hard drive or downloaded from the internet over several hours, but it now only takes a few minutes on the 5G network. 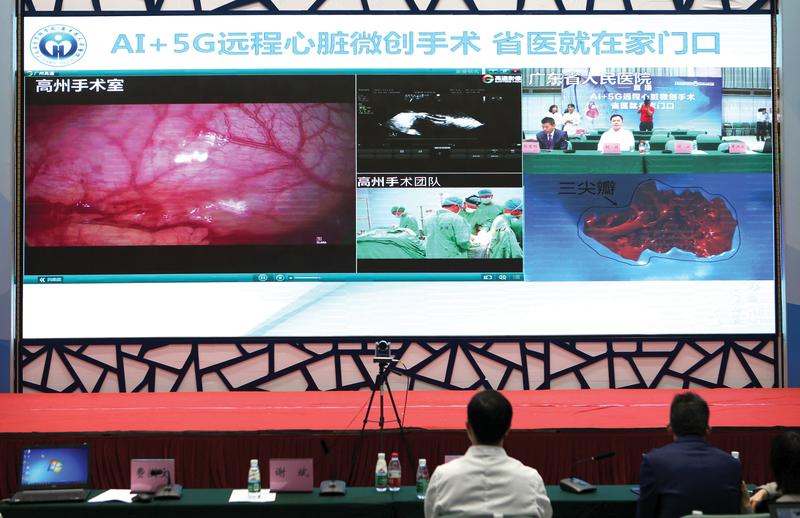 Doctors at the hospital provide real-time instructions for an operation in Gaozhou, 400 kilometers away, via a multimedia room. (ZHANG JIAYANG / XINHUA)

“We could see the (heart) deformities clearly. The 5G system helped to reduce errors and improve efficiency,” Guo said, adding that he believes 5G will help medical staff in remote areas to master heart surgery faster.

A trainee has to practice at least 100 times before becoming a lead surgeon in a minimally invasive operation. In times gone by, local medical staff had few opportunities to learn from well-trained surgeons, and the county hospital only invited professionals from Guangzhou to help with operations four or five times a year.

The 5G-assisted services, which come at a lower cost than previous systems, can also help county hospitals attract more patients.

He Yong, chief surgeon at the county hospital in Gaozhou, calculated that such an operation would cost the patient 20,000 yuan (US$2,900) if performed by local staff members, and another 10,000 yuan if specialists were involved.

However, if the patient chose to have the surgery in Guangzhou, the cost would rise to 40,000 yuan and the family members would have to make additional payments for accommodations and travel, He said, adding that surgery via 5G requires no extra payment.

Guangdong was in the vanguard of China’s reform and opening-up in the 1970s and ’80s, and today it is home to many leading hospitals and booming high-tech businesses.

The southern province is also a pioneer of China’s healthcare reform, with efforts to develop a hierarchical medical system and internet-based treatment.

However, medical services in remote areas are still far from satisfactory, while many county- and township-level hospitals lack advanced equipment and well-trained staff.

Since 2017, Guangdong has invested 50 billion yuan to improve the healthcare infrastructure in underdeveloped regions, and has also encouraged large hospitals to provide assistance with training.

According to the provincial health authorities, the inpatient rate at county hospitals reached 83.5 percent last year. In Gaozhou, the rate is 90 percent, indicating that more patients now see doctors locally, rather than traveling to big cities.

He Yong welcomed cooperation with top hospitals through 5G technologies, but noted that county hospitals have to spend more on high-quality equipment. “It is still a challenge for us,” he said.

In May, doctors with the Cancer Center of Sun Yat-sen University in Guangzhou used 5G to remotely direct three operations in real time in Shenzhen, Zhuhai and Gaozhou.

Liu Zhuowei, vice-president of the center, said the move proved that 5G-assisted treatment is efficient.

Guo, the surgeon in Guangzhou, expects 5G to provide greater surgical safety, but the main advantage will be in having specialists from large hospitals assisting more junior colleagues elsewhere.

“I hope big hospitals will not be overcrowded, and we will have more time for research and treating critically ill patients,” he said.