HK start into final round of Asian Cup qualifiers

Tai Po's Lee Ka-yiu was one of the youngsters who were given a chance by coach Kim Pan-gon. (Photo courtesy of HKFA.com)

On Tuesday, March 28, the representative team of Hong Kong will face Lebanon, in what will be the first of six games in the third qualifying round of the Asian Cup. Hong Kong’s group B is completed with DPR Korea and Malaysia, and both winner and runners-up will directly qualify for the tournament in 2019.

Hence, there is a lot at stake this Tuesday night for Hong Kong, if they would like to keep their chances alive. While DPR Korea are the clear favourites to win the group, Lebanon and Malaysia will be a serious challenge, but also an indicator of where the representative team is heading to at the moment.

Hong Kong travelled to the Middle East earlier than usual for acclimatisation, with a first stop in Amman where they took on Jordan in a friendly on Thursday, March 23. However, succumbing to a 0-4 defeat, the game also laid bare a lot of weaknesses and coach Kim Pan-gonhas been facing questions if he had selected the best players available to him. Besides Kitchee’sHelio, Kim also fielded Tianjin Quanjian’s Jean-Jacques Kilama as centre-back, who currently only appears in the reserve side of the Chinese Super League squad. The starting eleven featured a total of six defenders, with some of them having to fill up unusual roles, and the team was hardly able to create any goal scoring opportunities. In the second half, Helio and Kilama were replaced by Lee Chi-ho and Festus Baise, but the attack – led by Sandro – remained harmless throughout the entire match, especially lacking the quality in the midfield to take control.

Prior to the game, coach Kim emphasized that he would like to give youngsters a chance to prove themselves, selecting a total of six under-24 players – including Tan Chun-lok, Lee Ka-yiu, Li Ngai-hoi, Leung Nok-hang, Lo Kong-wai and Wong Wai. While this seems to be an admirable decision, the team has already been missing key players due to injuries or fatigue: Lam Ka-wai, Xu Deshuai, Itaparica, Alex Akande, and Paulinho have yet to find their way back to the pitch. In addition, Qingdao’s GodfredKarikari and Pegasus striker Chan Siu-ki opted to stay at home for this round. 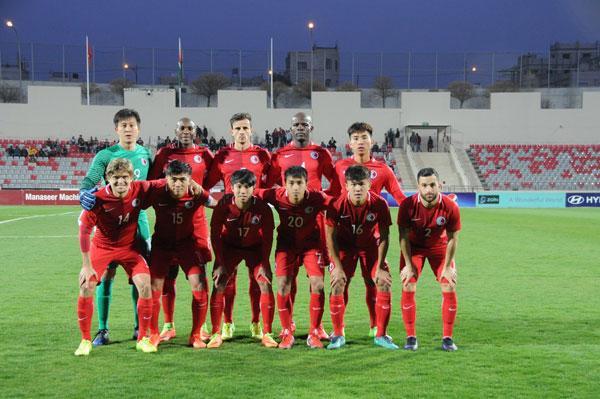 On March 23 Hong Kong succumbed to a 0-4 defeat to Jordan in a friendly game in Amman. (Photo courtesy of HKFA.com)

In spite of this talent-drain, Kim still decided to leave more key players at home, which supposedly also let to the fall-out with Bai He, who eventually resigned from the representative team, citing a lack of respect from the coach. Regulars such as Andy Russell, Chan Wai-ho, and Lo Kwan-yee are also missing, while some wonder why well-performing local strikers – such as Tommy Chuck Yiu-kwok and James Ha – have once again not be considered.

That said, all eyes will be on Hong Kong this Tuesday, when they hope for a good start into the qualifying round – and given the uninspiring performance against Jordan, the representative must step up their game. Lebanon are currently 155th in the FIFA world ranking, so 13 places behind Hong Kong, but their recent results indicate an upwards trend. Last November, they held both Jordan and Palestine to a respectable draw.

The game between Lebanon and Hong Kong will kick off at 18:00 local time (23:00 in Hong Kong) in Beirut’s Camille Chamoun Sports City Stadium. Meanwhile, the parallel tie between DPR Korea and Malaysia has been rescheduled to June due to on-going diplomatic tensions. Hong Kong will host their first home game against DPR Korea on June 13, with the venue yet to be decided.