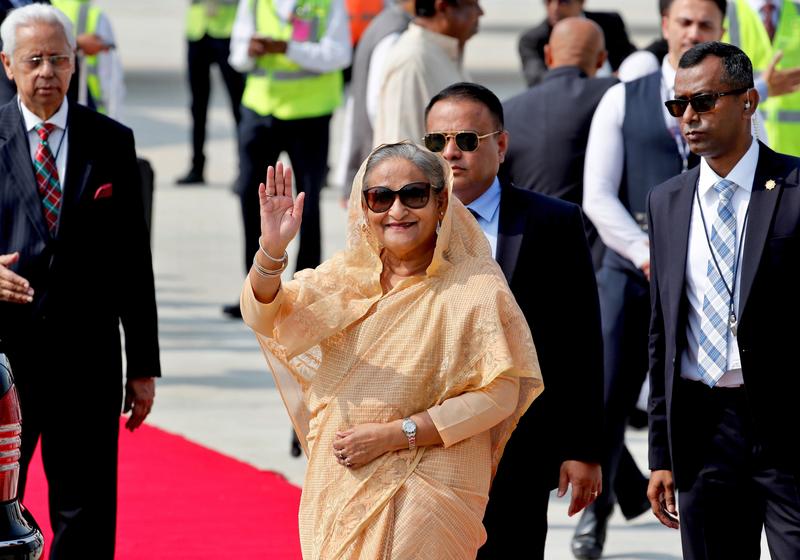 NEW DELHI — Bangladesh Prime Minister Sheikh Hasina arrived in India on Thursday for a visit during which she is expected to sign agreements on increasing trade and investment and improving regional connectivity.

Hasina will meet with Indian Prime Minister Narendra Modi on Saturday and is also scheduled to address a World Economic forum meeting during her four-day visit.

Hasina is also expected to seek support for her country’s plan to push Myanmar to take back Rohingya Muslims who fled violence and repression there in what has become one of Asia's largest refugee crises in decades. Bangladesh is looking for cooperation from India, China and Japan to speed up the process.

While Bangladesh has taken the vast majority of Rohingya refugees _ more than 700,000 _ an estimated 40,000 Rohingya also have taken refuge in parts of India.

Dilip Sinha, a retired Indian diplomat who has served in Bangladesh, said India and Bangladesh should join hands in resolving this issue with Myanmar.

“Both will benefit from such a cooperation,” Sinha said.

The two nations will also likely discuss their own migrant issues.

India has recently sought to identify thousands of what it says are “illegal migrants” from Bangladesh who have entered India across their porous border over the years. India plans to seek their repatriation to Bangladesh.

Bangladesh also is concerned over India’s delay in signing an agreement on the sharing of water from the Teesta river, which flows from India into Bangladesh.

Bangladesh says it is a lower riparian state and needs Teesta river water during the lean summer season.

The agreement has been pending since it was nearly signed in 2011 as it has been blocked by India's West Bengal state Chief Minister Mamata Banerjee.

Banerjee has said the state can't spare water for Bangladesh because of its summer needs.