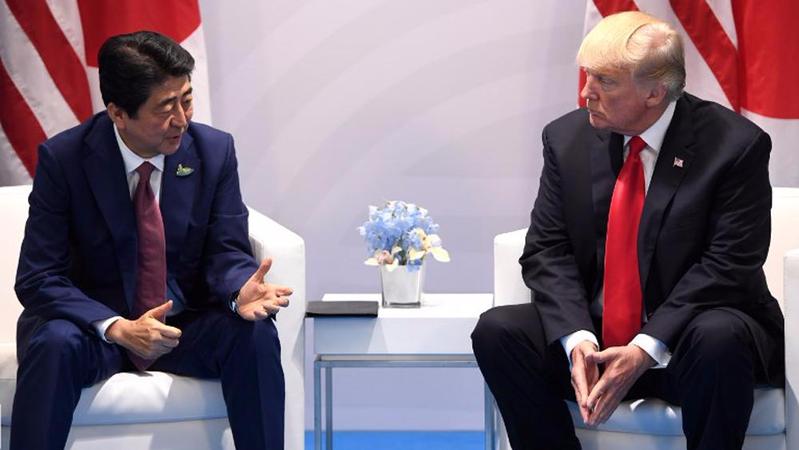 Japanese Prime Minister Shinzo Abe, left, and US President Donald Trump hold a meeting on the sidelines of the G20 Summit in Hamburg, Germany, July 8, 2017. The Japanese leader said on Aug 15, 2017 he agreed with President Trump during a telephone call on Tuesday that their top priority regarding the Democratic People’s Republic of Korea was to do what they could to halt its missile launches. (SAUL LOEB / AFP)

TOKYO – Japanese Prime Minister Shinzo Abe said he agreed with President Donald Trump during a telephone call on Tuesday that their top priority on the Democratic People’s Republic of Korea (DPRK) was to do what they could to halt its missile launches.

"Through a firm partnership between Japan and the US and cooperating with China, Russia and the international community we agreed that our priority was to work to ensure that North Korea doesn't launch more missiles," Abe told reporter after he spoke to Trump.

Through a firm partnership between Japan and the US and cooperating with China, Russia and the international community we agreed that our priority was to work to ensure that North Korea doesn't launch more missiles.

Abe said he also praised a commitment by Trump that the United States would ensure the security of US allies in the region as threats from the DPRK intensify.

Under Japan's alliance treaty with the US, Washington has pledged to defend Japan. It has put Japan under its nuclear umbrella, meaning it could respond to any attack on Japan with atomic weapons.

Trump and Abe discussed a range of other regional and global issues of mutual interest, the White House said.

Japan's defense chief and foreign minister will meet their US counterparts on Thursday to reaffirm Washington's commitment to defending Japan, including the use of its nuclear deterrent.

The Japanese government announced on Tuesday that Japan's Minister of Defence, Itsunori Onodera, and Minister of Foreign Affairs, Taro Kono, travel to the US capital this week for "two-plus-two" meetings with Defense Secretary Jim Mattis and Secretary of State Rex Tillerson.

The meetings come with tensions high in East Asia with the DPRK threatening to fire missiles into the waters close to the US Pacific territory of Guam. The missiles would have to fly over Japan to reach their target worrying Tokyo that warheads or missile debris could fall on its territory.

US President Donald Trump has warned of "fire and fury" if the DPRK threatens the US, and said the US military is "locked and loaded".

"The strategic environment is becoming harsher and we need to discuss how we will respond to that," a Japanese foreign ministry official said in a briefing in Tokyo. "We will look for the US to reaffirm it defense commitment, including the nuclear deterrent," he added.

Talking to reporters in Tokyo on Tuesday, Japan’s Economy Minister Toshimitsu Motegi said the threat posed by the DPRK has entered a new stage and that Japan wants to work with the US and other relevant countries to respond.

Motegi said he wants to monitor the situation in case of any impact on Japan's economy.

He declined to comment on any financial market moves related to DPRK tensions.