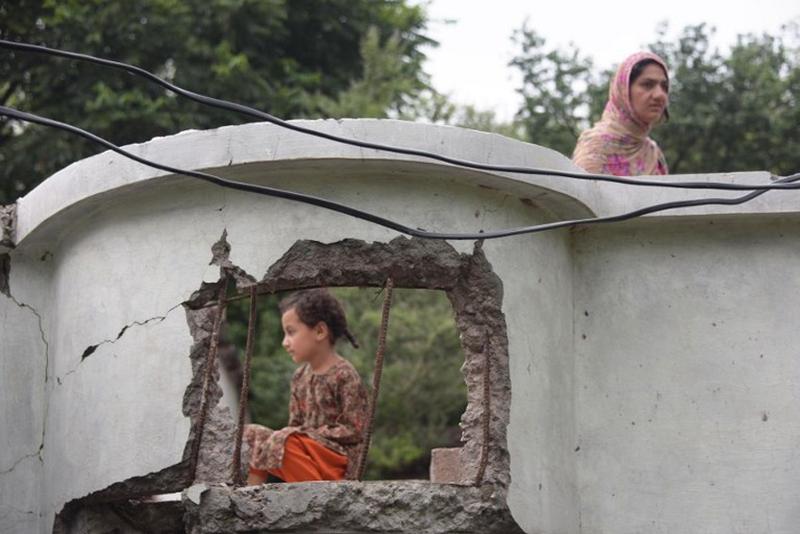 In this July 22, 201 photo, members of a Kashmiri family are seen in their damaged house after cross-border firing between Pakistan and Indian troops in Morha village Line of Control (LOC) in Nakyal Sector, 140 kilometers from Muzaffarabad, the capital of Pakistan-controlled Kashmir. (SAJJAD QAYYUM / AFP)

ISLAMABAD – Pakistan on Tuesday summoned a senior Indian diplomat over cross-border shelling, which killed a civilian along the Line of Control (LoC) in Kashmir region, according to the country’s foreign office.

India forces resorted to "unprovoked ceasefire violations" in Khanjar Sector along the LoC on Monday, resulting in the death of one innocent civilian, the ministry said in a statement.

The ceasefire violations by India are a threat to regional peace and security and may lead to a strategic miscalculation.

It blamed the Indian forces for more than 2,050 "ceasefire violations" along the LoC and the Working Boundary, resulting in the deaths of 33 innocent civilians and injury of 122 others.

It further said the "deliberate targeting of civilian population areas is indeed deplorable and contrary to human dignity and international human rights and humanitarian laws."

"The ceasefire violations by India are a threat to regional peace and security and may lead to a strategic miscalculation.”

He also pushed the Indian side should permit UN Military Observer Group in India and Pakistan to play its mandated role as per the UN Security Council resolutions.

Pakistan and India declared ceasefire in 2003 along the LoC, which divide both nuclear rivals in Kashmir. However, both routinely accuse each other of violations.