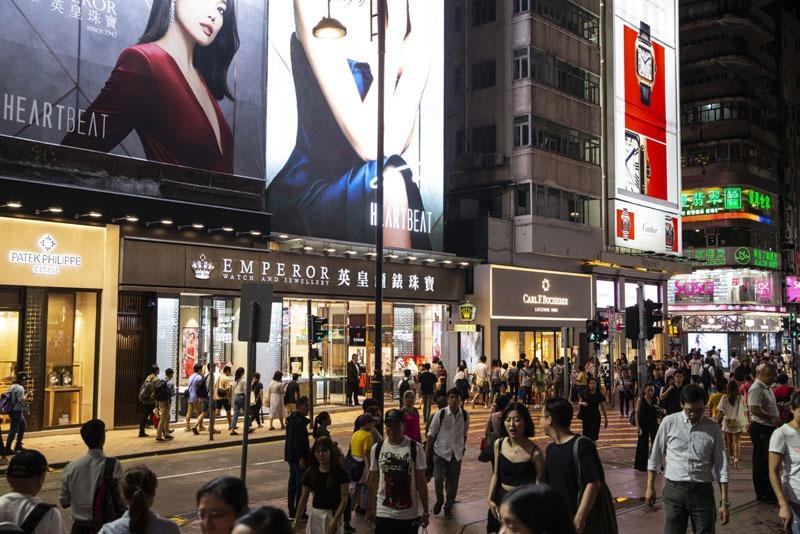 Pedestrians walk past a luxury store in the Causeway Bay district of Hong Kong, on Aug 29, 2019. (CHAN LONG HEI/BLOOMBERG)

The city, which is seeing tourism plummet amid months of protests triggered by the extradition bill incident, is poised to lose its leadership to the US and the Chinese mainland, said Jean-Marc Pontroué, chief executive officer of Panerai, a unit of Swiss luxury firm Richemont.

Swiss watch exports to Hong Kong fell 4.6% for the month, putting the market in second place behind the US

“Even though Hong Kong has a very rich, dense local community plus millions of tourists, it’s not long-term foreseeable to keep that leadership,” Pontroué said in an interview Friday in Hong Kong. “The potential in some markets has reached its top. Of course, China will continue to grow. The US will continue to grow.”

Hong Kong has sat on the throne of Swiss watch sales largely thanks to its status as a shopping haven. With no sales tax, an exotic lifestyle and countless luxury boutiques, the city has become a mecca for shoppers across the globe. Moreover, its proximity to Chinese mainland gives it easy access to the country’s wealthy consumers eager to snap up luxury goods.

Watch makers have been among the biggest hit by the violent protests and headwinds from the China-US trade war that have pushed Hong Kong into a recession. Sales of jewelry, watches and clocks dropped 41% in September as tourism plummeted. Swiss watch exports to Hong Kong fell 4.6% for the month, putting the market in second place behind the US.

The disruption has significantly impacted Panerai’s business in Asia’s financial hub, Pontroué said, but the blow was offset by stronger demand in the Chinese mainland and neighboring countries.

“People are changing their habits to travel, and people are going to new destinations,” Pontroué said. “We are compensating close to 100% what we lose in Hong Kong by big business increases in mainland China, Korea, Japan and Singapore.”

Panerai is joining other luxury goods makers in expanding its footprint in the Chinese mainland to tap the world’s biggest consumer pool. Deterred by geopolitics and a weak yuan, mainland shoppers are increasingly shifting their luxury spending back home.

Three quarters of luxury watches sold to Chinese mainland customers will be bought on the mainland instead of by travelers in five years, compared with only a quarter just a couple of years ago, Pontroué estimated.

Founded in Florence, Italy, in 1860, Panerai now has about 150 boutiques around the world, including more than 50 in China. The timepiece maker is planning to open an additional five stores in the Chinese mainland before next March, extending its reach to lower-tier cities. Looking forward, there’s room to set up more boutiques in the country, especially at airports, the CEO said.

Despite Hong Kong’s diminished status, Pontroué is optimistic the city will recover soon after the clashes settle.

“Once it is over, business back to normal will be very quick, because appetite for Hong Kong will remain alive,” he said.