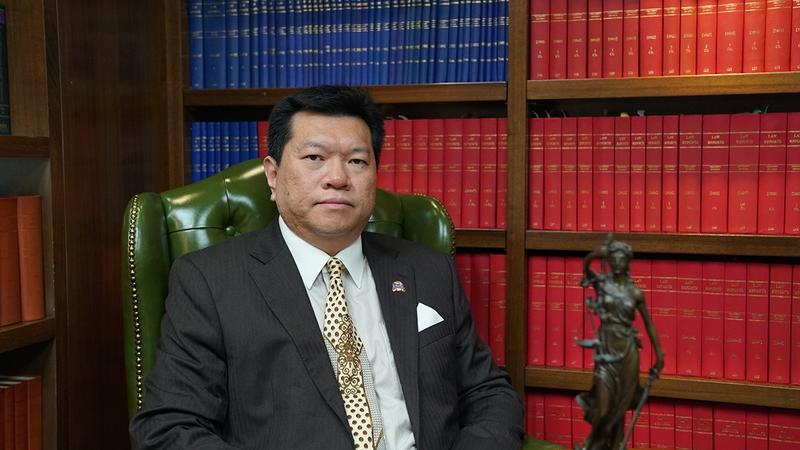 Lawrence Ma Yan-kwok shares his views on the recent unrest in the city during an interview with China Daily. (PHOTO / CHINA DAILY)

The legislation of the Hong Kong Human Rights and Democracy Act is a political tactic which will be used by the United States to contain China rather than just a legislative matter, Lawrence Ma Yan-kwok, chairman of the Hong Kong Legal Exchange Foundation, said on Tuesday.

Ma’s analysis came a day before the bill is expected to be deliberated on and voted in the US Congress. The bill requires the secretary of state to evaluate Hong Kong’s autonomy every year in order for the city to maintain its special trade and economic relations with the US.

From the perspective of international law, the act will contravene the United Nations’ General Assembly Resolution, the barrister told China Daily in an exclusive interview.

According to the General Assembly Resolution 2131, no state has the right to intervene, directly or indirectly, for any reason whatever, in the internal or external affairs of any state. All forms of interference or attempted threats against the state or against its political, economic and cultural elements, are to be condemned.

“However, the bill is purporting to intervene in the affairs of Hong Kong Special Administrative Region, which is China’s internal affairs,” Ma said.

The provision relating to the rendition between the Chinese mainland and Hong Kong in the bill, for instance, will impose pressure on Hong Kong officials. But this is clearly the SAR’s internal affairs and also falls under China’s jurisdiction and autonomy, he elaborated.

Earlier, some Hong Kong activists made a plea in the US Congress, hoping members of Congress pass the bill.

Noting the chances of Congress passing the bill are high, Ma believes that once it is passed it might encourage rioters in Hong Kong.

“It (the passing of the act) is a gesture of the entire American nation backing them up in the name of so called ‘democracy’,” Ma explained.

By doing so, the US will try to use Hong Kong as a “bargaining chip” in the US-China trade conflict, Ma noted.

Trade talks between the US and China has not come to any fruitful conclusions and seem to be at a standstill, Ma said. Hong Kong is an “opportunity” for the US to seek a breakthrough, as four months of chaos in the SAR has successfully attracted the world’s attention, he added.

“Politically, Hong Kong provides an angle for the US to make up a story, to make up an excuse or something to condemn China ... or possible opportunity to seek international intervention or even international condemnation,” Ma explained.

In addition, Ma said the act is a way for the US government to divert public attention from the country’s political or policy deficiencies towards anti-Chinese sentiment.

Ma also slammed the US for having such “hypocritical standards”. “They choose to turn a blind eye to violence and illegal activities by rioters in Hong Kong when trying to enact the law.”

Last weekend, speaking to reporters, Republican senator Ted Cruz, who was on a brief visit to the city, insisted he had never heard, or seen evidence, of rioting, vandalism and mob attacks after more than four months of civil unrest in the city.