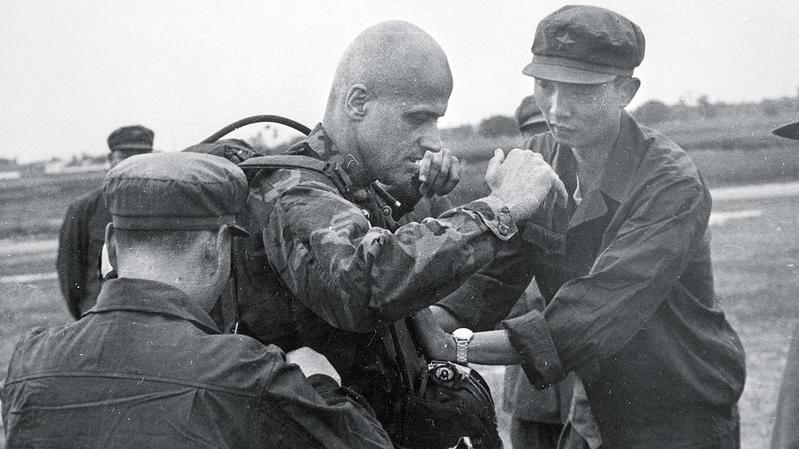 A sad-faced toy gorilla, dressed like a boxer with the national flags of the United States and China on each side, sits at the entrance of the apartment in Hollywood, Florida, where retired US army major general Bernard Loeffke resides.

"My dream is a simple one－spend money around the world to help others. My dream is to have China and the US work together for the good of the world."

"China and the US have had turmoil, and (the toy) is all banged up. It's got gloves on, and it says I want a hug," Loeffke says humorously.

His apartment is filled with memorabilia－medals, awards, family and military photos, art pieces from around the world (including China)－and a world map showing all the places he has visited.

Loeffke pointed at a photo of the Vietnam Veterans Memorial: "I had 34 of my soldiers who died when I was a commander and about 200 wounded. I don't want any more soldiers on my walls," he says.

Loeffke is the recipient of four Silver Star medals, five Bronze Star medals and a Purple Heart for his military skill and valor on the battlefield. The former Special Forces officer once ran through enemy fire to rescue a fellow soldier.

The general was himself wounded by Chinese and Vietnamese troops trained and equipped by the Chinese military during the Vietnam War.

His first indirect contact with China may have left him injured, but his subsequent interactions changed his views of the country and led him on a path to promoting friendship and understanding between the two peoples.

Loeffke visited China for the first time in 1973, as director of the White House Fellows. During that trip, he shook hands with Chinese general Xu Xin, who was wounded by US fire as the commander of Chinese volunteers during the Korean War. The two generals became firm friends.

That experience led Loeffke to view the Chinese not as the enemy but as people to get to know and build up a friendship with.

In 1982, Loeffke became the first US army general assigned to the US embassy in China, as defense attache. Over the next three years, he made many Chinese friends and became fluent in Mandarin.

He also became the first foreigner to jump with Chinese paratroopers.

Loeffke had been trying to arrange the jump for almost two years without success before the then US secretary of defense Caspar Weinberger made a request on his behalf when he visited China in 1984.

When the Chinese expressed concern that Loeffke might be injured, Weinberger replied: "I have hundreds of generals in the Pentagon. If he dies, I will send you another one."

"I started training with the Chinese army within two weeks," Loeffke recalls. "The Chinese wanted me to jump with my own US parachute packed in the US. My answer: I want to use a Chinese parachute packed by Chinese riggers. I wanted them to know that I was trusting them with my life."

Loeffke laughed as he pointed at a photo in which a few Chinese military men were checking his parachute.

"This has been the most checked parachute of my whole life. They checked it 10 times. Usually you only check twice. I said I know why: If something happens to me, all of you will be executed. And they laughed."

He said that the jump and the time he spent with the Chinese paratroopers created a bond between them that was difficult to replicate.

"I am now a Chinese brother paratrooper," Loeffke says.

More than 30 years later, the general still possesses the Chinese military helmet he wore when he made the jump in China.

While stationed in Beijing, Loeffke helped US runner Stan Cottrell set up a run from the Great Wall to the southernmost part of China. Three years later in 1985, Cottrell ran 5,793 kilometers across the United States with three Chinese runners.

Loeffke and 1,000 US paratroopers joined the run in Washington DC and took part in the following celebrations.

In 2006, he traveled to China for the 11th time, taking with him his 17-year-old son, Marc. Together they taught English to Chinese students.

Retired US army major general Bernard Loeffke still has the Chinese military helmet he wore when he jumped with Chinese paratroopers in 1984. (MAY ZHOU / CHINA DAILY)

He later persuaded his daughter Kristina to teach theater in China for a short period so that she could form a bond with China.

In 2012, celebrating the 40th anniversary of the White House Fellows, Loeffke published the book, China, Our Enemy? A General's Story, in which he documented his experiences in China. He even used a picture of Lei Feng, a popular Chinese role model of the 1950s, on the cover.

"An up-and-coming nation like China is bound to have friction with the United States, but it does not have to be an enemy. We need to establish a strong relationship to prevent war," he says in his book.

In 2012, he also set up a Friendship Fund at the US Military Academy at West Point to send cadets to China for three weeks every summer.

"I give US$10,000 each year to send West Point cadets to China. They go to communities to teach preventive medicine to elementary schools. They came back totally impressed. They said that the children are so beautiful. They love the children who say, 'You are my first American friend'. It builds an unmistakable bond," Loeffke says.

Loeffke is also a guest lecturer at the Confucius Institute at Miami Dade College in Florida, where he engages with students to discuss the importance of building strong ties with China.

In the past few years, Loeffke has been working with the nonprofit organization Food for the Poor to build simple houses for people in Latin America. So far, he has built more than 30 houses in four villages.

Loeffke says his building project is a good way to demonstrate how the US and China can work together to offer some help to the needy. "I want to build a ring of China, a string of homes around the Caribbean Sea," he says.

A Chinese student who raised money for the program in Beijing to buy fishing boats equipped with GPS for people in need hopes that more Chinese volunteers will participate.

"My dream is a simple one－spend money around the world to help others. My dream is to have China and the US work together for the good of the world. We have to get out of this habit of just thinking about one country－we have to think of the world as a whole," Loeffke says.

The general says many people have asked him about current US-China relations. "There is no tension when it's people to people... If we worry about the relationship one-on-one and one at a time, the world will get fixed. What we need to do is to continue the relationship," he says.