By Yang Han in Bangkok 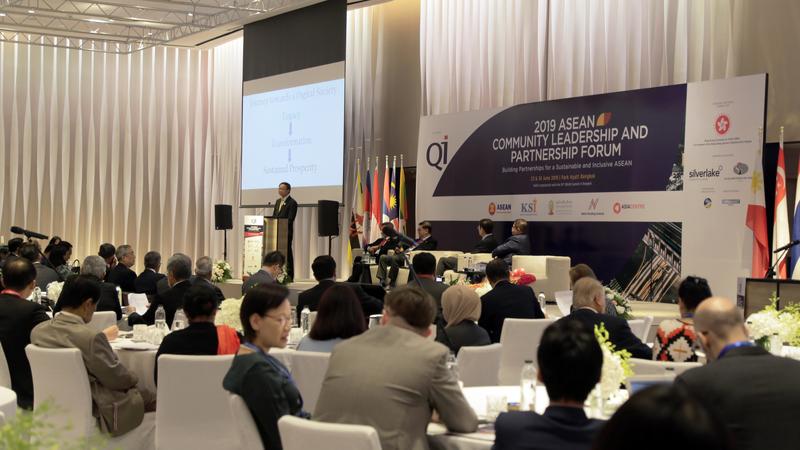 Speakers share their insights on issues concerning the future of ASEAN at the 2019 ASEAN Community Leadership and Partnership Forum held on June 23-24.  (VENUS O/ CHINA DAILY)

ASEAN countries need to work together to unleash the potential of technology to develop the digital economy, create new business opportunities and spur regional growth.

This was discussed by speakers at a China Daily Asia Leadership Roundtable panel session in Bangkok on June 24, as part of the 2019 ASEAN Community Leadership and Partnership Forum.

Held on June 23-24 in conjunction with the 34th ASEAN Summit in Bangkok, the forum was organized jointly by Kingsley Strategic Institute in Malaysia, the ASEAN Business Advisory Council, the ASEAN Studies Center of Chulalongkorn University, and Bangkok-based organizations Nation-Building Institute and Asia Centre. The forum’s theme was Building Partnerships for a Sustainable and Inclusive ASEAN.

New technologies such as 5G will create opportunities for the ASEAN digital economy, said Dar Wong, executive vice-president of the ASEAN-China Commerce Association.

“ASEAN cannot deny that it will be influenced by 5G,” said Wong, adding that with the rolling out of the new generation of mobile technology, everything, from work environment to security systems, will become obsolete and people should be aware of new things to emerge soon.

READ MORE: 15 yrs on, China becomes one of ASEAN's most reliable partners

Jason Chiu, founder and CEO of Hong Kong tech startup Cherrypicks, said ASEAN countries need to cooperate internally and externally, not just for technology advancement but more importantly for the construction of infrastructure.

Taking, for example, the idea of smart cities, Chiu said the concept is not about technology only, but about citizens and data.

“A lot of technologies are available today, yet legal systems facilitating infrastructure and human behavior, consumer mindset and society are not ready yet,” said Chiu, whose company is working on sensor networks for airports, subways, railways and shopping malls, to generate location big data and make such venues smarter in Hong Kong.

“We need to learn from others, developing what is relevant and suitable for ASEAN to find its own blueprint … ASEAN countries should work together as a region,” said Chiu, noting that China’s Belt and Road Initiative can also be a platform for joint cooperation on both hard and digital infrastructure.

Moderating the session, Barbara Meynert, senior adviser of Hong Kong supply chain and logistics conglomerate Fung Group, said there are tremendous opportunities for ASEAN for the growth of the digital economy.

“ASEAN is an important economy as it ranks third in the world in terms of population, sixth in GDP and fourth in trade value. But ASEAN is not yet a digital economy, it is only emerging,” said Meynert, noting the digital sector’s contribution to ASEAN’s GDP is still relatively low compared with those of China, Europe and the United States.

From the payments perspective, ASEAN is a very dynamic market, said Laetitia Moncarz, director for payments markets, ASEAN region, at the Society for Worldwide Interbank Financial Telecommunication (SWIFT), a global financial messaging platform based in Belgium.

Moncarz said the region’s high GDP growth, rising megacities and large number of tech-savvy young people make it an attractive market for the payment industry, especially when it comes to technology.

Moncarz said many ASEAN countries are already participating in, or considering using, SWIFT’s Global Payment Innovation (GPI) platform, launched to improve the cross-border payment experience. Around 50 percent of the millions of payments globally under GPI are credited end-to-end within 30 minutes, she said.

For the banking industry, pain has already been felt due to the emergence of fintech,

In a report by global advisory firm PricewaterhouseCoopers, top banking executives fear that more than 20 percent of financial services business will be under threat from fintech by 2020.

In addition, Hu said traditional banks in ASEAN, looking to offer a seamless business experience, can face difficulties getting licensed to enter other countries in the region. He hopes that ASEAN – to catch up with fintech, in a paradigm shift for the future – can develop a shared financial world for everyone.

Noting that China spends more on semiconductor imports, mainly from the US, than on oil, Pindar Wong, chairman of internet financial infrastructure consultancy VeriFi (Hong Kong), said China and the region are facing a “silicon shock”, which is going to take 10 to 15 years to resolve.

“The accusations (against Chinese telecommunications giant) Huawei are basically unsubstantiated as there is no evidence to say there is surveillance,” said Wong, noting that opportunities for ASEAN lie in technology transfer from China to the region and developing the region to be a manufacturing base for 5G equipment.

Wong said ASEAN needs to develop as a network of nations and create technical protocols to address the cross-border challenges it faces.

Pornpimol Kanchanalak, adviser to Thailand’s minister of foreign affairs, said the Fourth Industrial Revolution, while bringing much change through innovative technology, does not provide a lot of room for mistakes, and that is why people need to be careful about the negative effects.

She spoke of the importance of connecting people at risk of being left behind by the rapid development of the digital economy, and paying heed to the job displacement caused by technology and automation.

“Tech itself can include everybody – it is up to the leadership to make it good (for society),” said Cherrypick’s Chiu, on how technology can contribute to ASEAN’s inclusive development.

Beneficiaries of the digital economy are the users rather than the creators, as increasing numbers of people gain access to and make use of technology to get information and grow business, said Yose Rizal Damuri, head of the economics department at the Center for Strategic and International Studies, a Jakarta-based think tank.

“ASEAN states should open their doors for the investment from China, so they can use the platforms to create benefits for the economy,” said Yose.

“It is time for ASEAN to come up with a set of rules, institutions and standards that could define the role of government in the cross-border digital economy,” he said.

Yose said issues brought by the digital economy should be dealt with internationally, including discussing principles related to e-commerce in the negotiation of the Regional Comprehensive Economic Partnership, the proposed free trade agreement between the 10 ASEAN members and six of their FTA partners – China, Japan, South Korea, Australia, New Zealand and India.