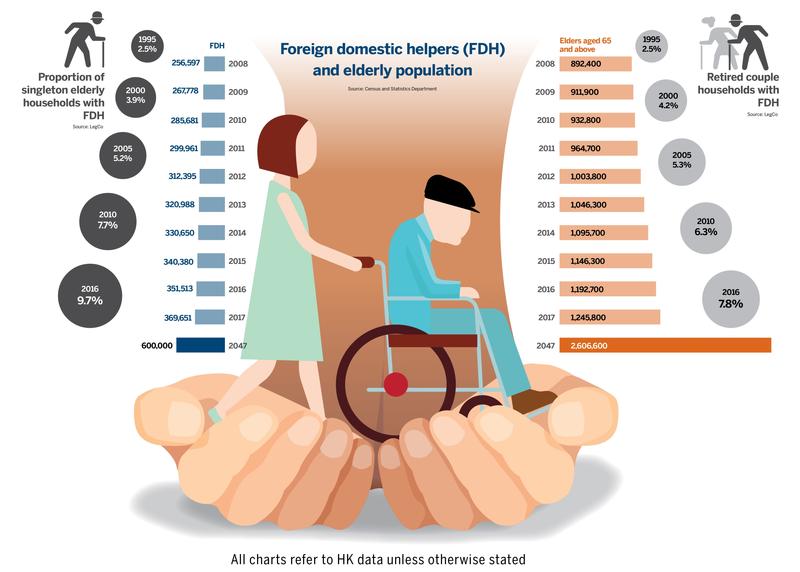 Hong Kong is graying fast. Over the next two decades, the city’s elderly population will double, surging from 1.16 million in 2016 to 2.37 million in 2036. The city does not have sufficient elder-care facilities or caregivers to tackle the new problem. The bureaucrats have no precedent to follow. The administration is coping with fragmented responses. A holistic policy framework factoring in all vital support for the elderly is needed.

The geriatric population is overloading nursing homes and public hospital facilities. There is a severe shortage of trained elder-care nurses. The government seeks to import trained caregivers, and to reskill domestic helpers already in Hong Kong. This plan was mooted in the chief executive’s 2017 policy agenda. 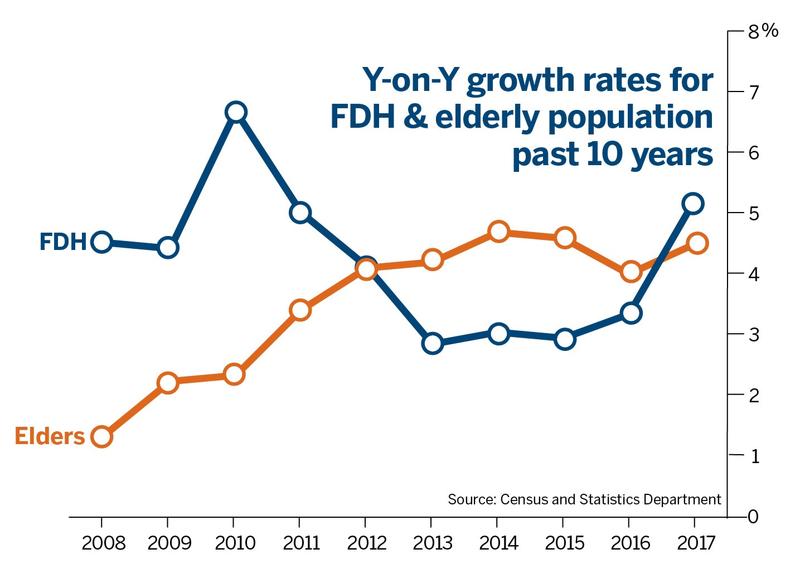 Secretary for Labour Law Chi-kwong said that an additional 240,000 foreign domestic helpers (FDH) is projected to be needed over the next three decades. The surging demand is to accommodate the rapidly aging population.

“Employing migrant care workers to look after the aged, especially the feeble ones, is a global trend,” said Ernest Chui Wing-tak, associate professor in the Department of Social Work & Social Administration at the University of Hong Kong (HKU).

The elder-care service sector is seriously understaffed. In 2017, the government survey of 69 subsidized non-government elder-care providers recorded the overall vacancy rate for elder-care workers at 18 percent.

By 2047, Hong Kong is projected to have 2.6 million senior citizens (aged 65+), comprising 36.6 percent of the total population, or almost 4 out of 10 people. Elder-care trained migrant caregivers are a vital resource to tap.

David Bishop, principal lecturer of the Faculty of Business & Economics at the HKU, and co-founder of several NGOs for migrant worker and human trafficking issues, said that labor rights, wage levels and social discrimination need to be addressed to make HK a desired destination for trained elder-care workers. Ernest Chui echoes that.

Treating migrant domestic helpers as workers, rather than serfs without rights, will require a society-wide attitude adjustment. The decades-long neglect of domestic helper protections by government, plus agent exploitation and abuse by host families, are not welcoming conditions for workers.

The demeaning ways in which domestic helpers are housed will also worsen. The trend for new flats shrinking to less than 300 sq. ft makes space for a live-in helper an even more acute challenge.

The 2017 survey of the Mission for Migrant Workers, an NGO supporting FDH, found the average living space for domestic helpers is 50 sq. ft. Around 22 percent of respondents sleep in the living room, 4 percent in the kitchen, 2 percent in the toilet and inside closets or other direly cramped conditions. The other 72 percent sleep in multi-occupancy bedrooms. 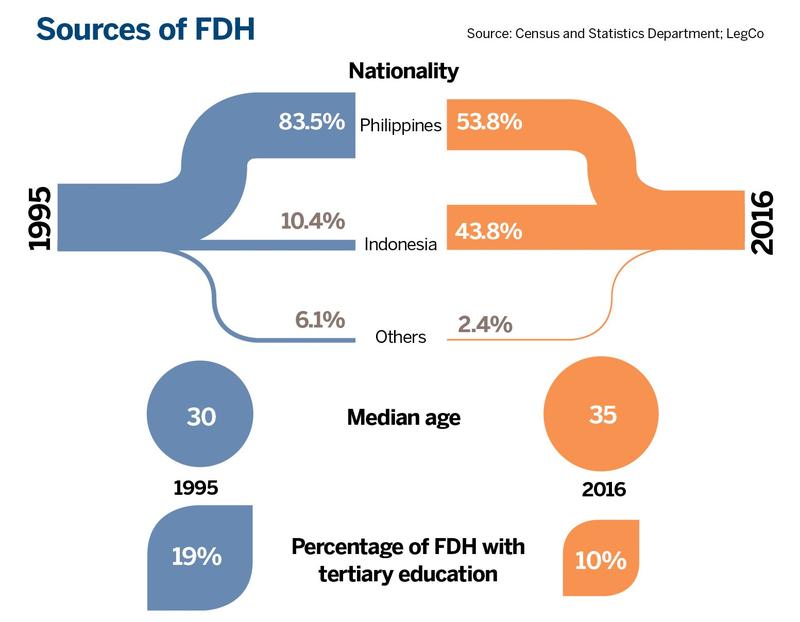 As the economy transformed in the 1980s from manufacturing to services, the middle-income families surged, leading to a rapid increase in domestic helper demand. In 1982, FDH numbers stood at 21,500. By 2017, it multiplied 17 times to 369,651. The Philippines accounted for 54 percent, and Indonesia supplied 43 percent.

Chui cautions that “being a caregiver for older people is neither basic nor simple. It demands specialist skills, including hygiene, nutrition and toileting techniques plus many other trivial needs, which all add up to quality care. Nonetheless, migrant workers in Hong Kong do not receive any formal elder-care training before reporting for duty.” 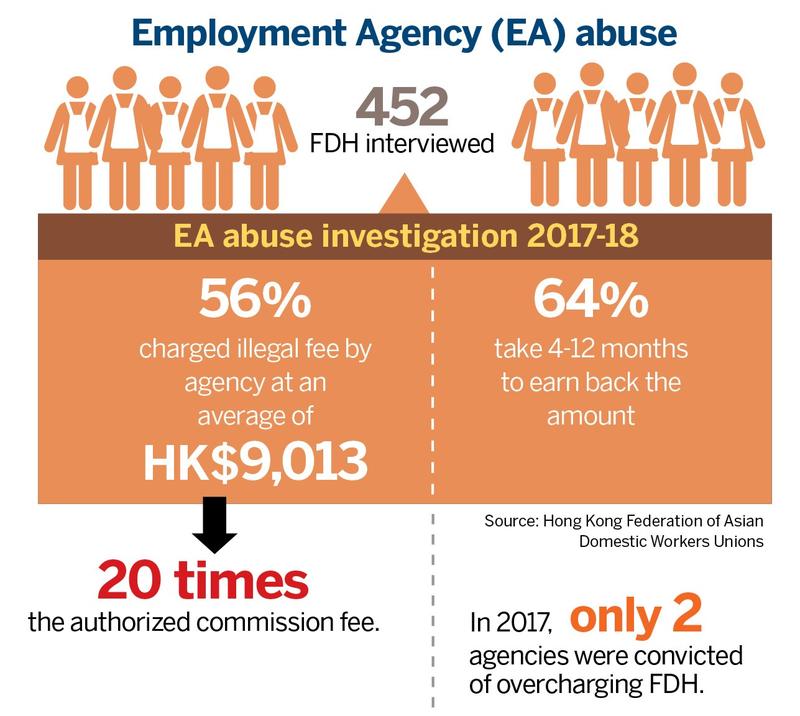 Too little, too late

In Singapore, the government grants a US$200 annual subsidy named Caregiver Training Grant to every care recipient family who sign up FDH for training courses. The courses cover basic home care and specific skills to cater for the elderly with dementia, catheter tubes, and stroke.

Regulations in China’s Taiwan are more stringent. All elder-care migrant workers are required to undergo 90 hours of specialist training and up to 70-hour Chinese language courses at their place of origin, to qualify for work visas. The latest data compiled by LegCo indicates 99 percent of FDH in Taiwan are home-based care workers.

This year the Social Welfare Department (SWD) launched an 18-month Pilot Scheme to train local FDH in elder-care. A total of 300 domestic helpers caring for the elderly are being trained for free. Medical professionals like nurses, dieticians and physiotherapists from the Department of Health coach FDH on elder-care skills.

Chui said the scheme is a good “baby step” but encouraged the government to enlarge it into a community network, collaborating with more private elder-care centers to run training courses for FDH in their neighborhoods. That way, domestic helpers can access specialist elder-care training more readily, with less disruption to families.

In response to the city’s rapidly aging population and carer shortage, Bishop said, “There are no other options, so we better make it work” (training FDH into caregivers). 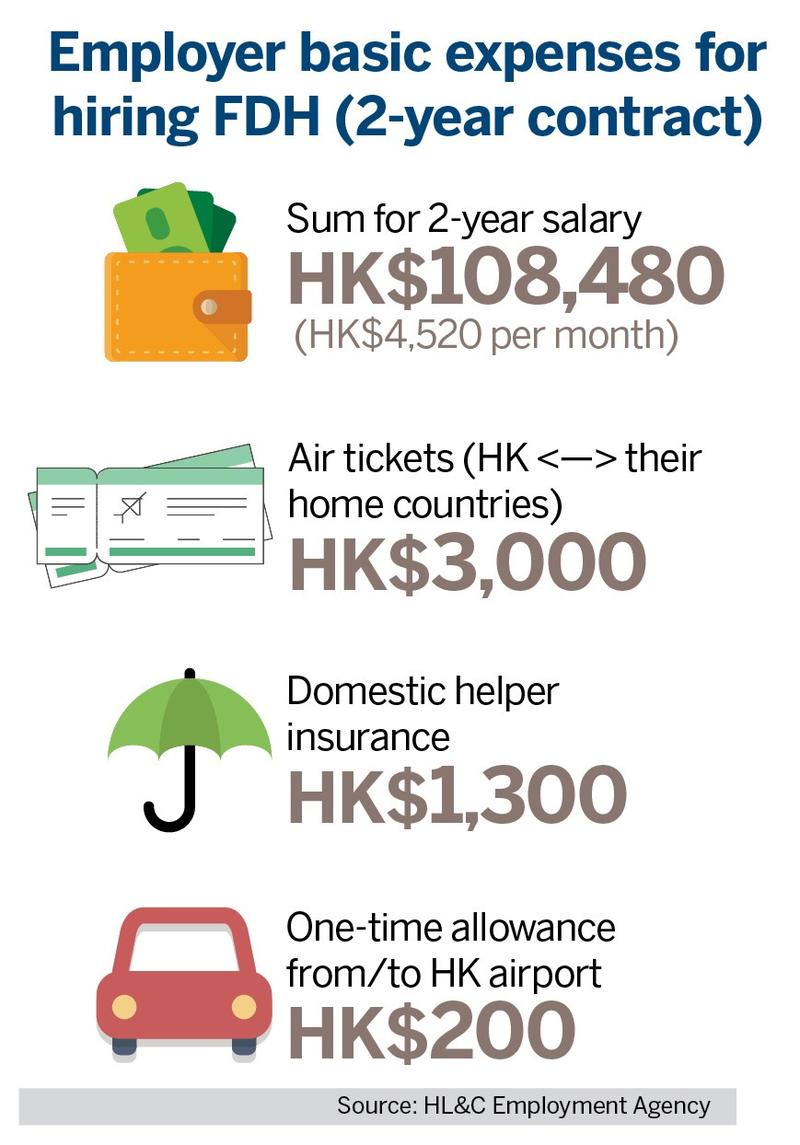 It is an open secret that domestic helpers are trapped into illegal long-term debt by agents colluding with rogue elements in the passport offices and consulates of their own countries. The HK government is fully aware of this exploitation. LegCo members visited source countries for official cooperation to stop these scams, but with little success.

The Hong Kong SAR in February 2018 increased the maximum fine for overcharging job seekers, from HK$50,000 to HK$350,000, and set imprisonment to three years. But still, the conviction rate remains low. In 2017, only two agencies were convicted of overcharging foreign domestic helpers.

The HK Federation of Asian Domestic Workers Unions (FADWU) surveyed 452 domestic helpers from July 2017 to March 2018. Among those who first came to Hong Kong, an astonishing 56 percent of them were forced by agencies to pay an illegal fee averaging HK$9,013, which is over 20 times the maximum commission at the time (HK$441 or 10 percent of first month salary) an agency can charge.

The FADWU found that almost two-thirds of all surveyed were heavily indebted on arrival in HK. The debt repayment took four to 12 months before they were able to receive the full value of their monthly salary. Bishop noted that if this exploitation continues, it will disincentivize foreign domestic helpers.

Over the next three decades, the HKSAR will need a total of about 600,000 foreign domestic helpers, a 58 percent increase from the current 380,000. “How can we expect so many new FDH if we don’t first fix the debt issues? The Hong Kong government has to start taking this seriously,” Bishop stressed. 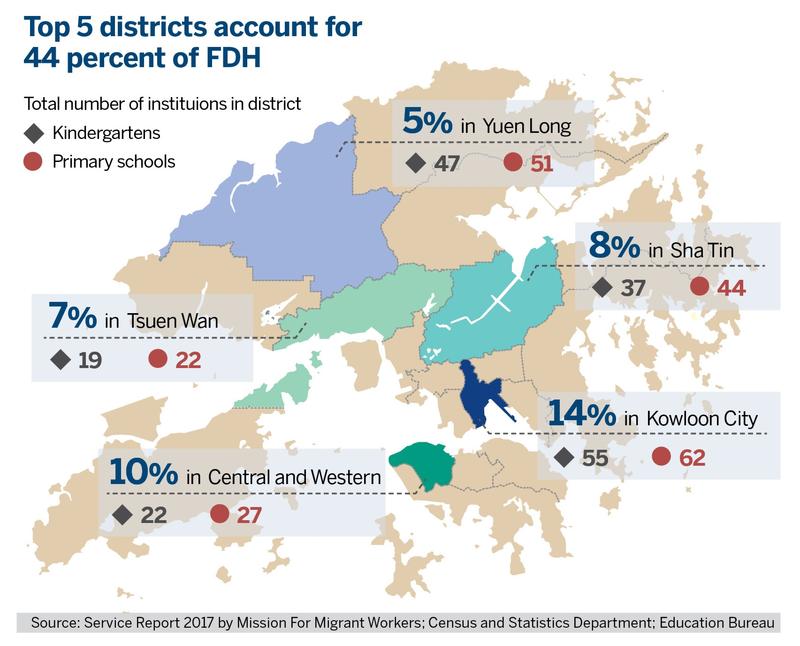 Hong Kong is not the only aging metropolis. In developed economies, demand for long-term healthcare service triggers an inflow of migrant care workers. In Italy, the proportion of migrant caregivers accounted for 72 percent of all home-care workers in 2005. In the US, migrant workers made up 23 percent of all direct-care workers in 2010, according to the Organization for Economic Cooperation & Development (OECD), an international grouping of 36 countries.

Even Japan, with the most stringent regulations on importing FDH, allowed the first batch of 50 Filipino domestic helpers last year. However, the first group is not allowed to engage in nursing care duties yet. Their salary in Japan is around US$1,500 (HK$11,774) — 2.6 times the current minimum salary (HK$4,520) for FDH in Hong Kong.

For Hong Kong to compete for that pool of migrant helpers, Bishop urges the government to upgrade terms of employment, eliminate agent exploitation, and ensure rights protections. Educating the elderly to treat their domestic helpers with respect is also needed. When the supply-demand balance favors them, FDH will not put up with abuse.

Bishop proposes a subsidy for the elderly to employ trained elder-care workers. “Being a caregiver for the elderly is very difficult and requires special skills. But most families in Hong Kong are not willing to compensate foreign domestic helpers for those extra challenges and skills,” he adds, noting that hiring a full-time, home-based caregiver in most developed economies is expensive.

Chui of HKU suggests the government and employers elevate employment and living conditions proactively, to make the city a pleasant and attractive workplace for FDH. Apart from all the other issues identified, FDH leisure space on off-days is unorganized. “The government can set up community centers for leisure activities at weekends, so they do not need to clutter the streets.” 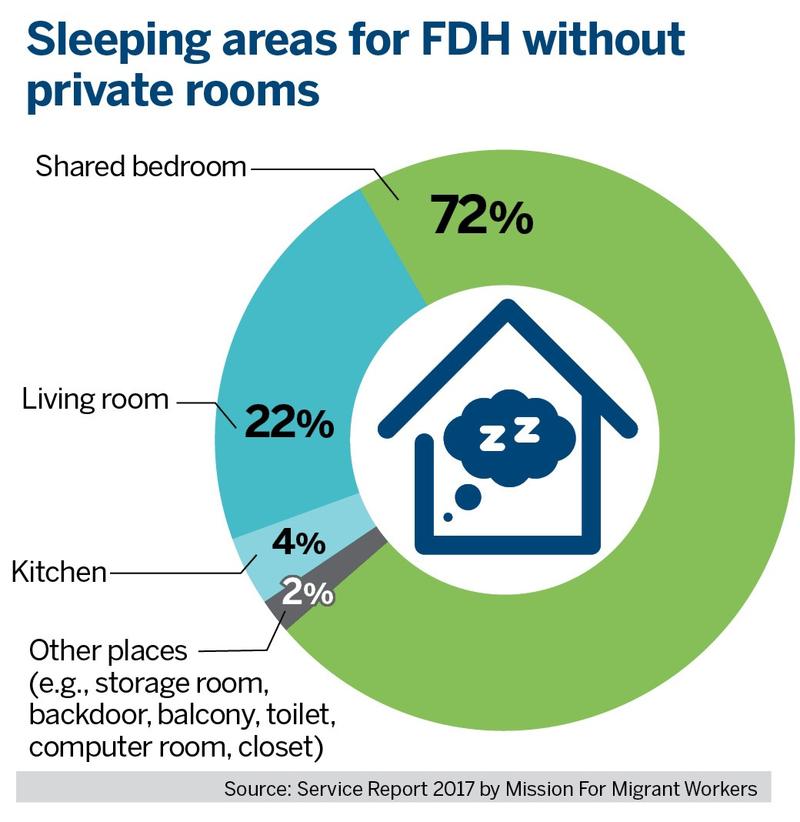 Most foreign domestic helpers are unaware of the pilot elder-care training program set up by the SWD. It was promoted on the SWD website and by word of mouth at NGOs. Liyana, an Indonesian domestic helper who cares for seniors, said “if I had known, I would apply to learn new skills.”

Liyana has been serving seniors, aged 78 and 84, for eight years. Her employer Tsang Kwok-chiu is suffering from severe anemia and joint and back pains. She said she hasn’t had the skill to safely guide him onto the bed.

“All youngsters in the family have to work, so they cannot care for me daily,” Tsang said. “Compared with living in elder-care centers, having a domestic helper is the best solution.”

David Bishop, principal lecturer of the Faculty of Business and Economics at HKU

When Cherry Valdez from the Philippines came to Hong Kong eight years ago, she was levied HK$15,000 by a local agent (she chose not to identify the agency). She paid that over 6-month installments. The debt was a “huge” burden for her. “I earned just over HK$2,000 per month. After paying the agency, I was left a few hundred,” she recalled.

“If we pay the fee in advance, they (the agency) will help us find an employer. If not, we have no work. That’s the deal,” she said. Valdez’s exploitation is a common experience.

She is currently serving two seniors. She wants to acquire proper elder-care training to better tend to them.

• Can the SWD training for FDH be extended to community centers?

• Can elder-care nursing training be accelerated and incentivized?

• What will it take to stop agent exploitation of FDH in HK?

• Should hostels be provided for FDH at convenient locations?