Driven by a good cause

As HK braces up for one of the world’s largest organized multi-city motorcycle fund-raising events, Joseph Lam turns the spotlight on the city’s customized bike riders.

Guillaume Barras, who co-owns what’s arguably Hong Kong’s first custom motorcycle workshop, feels the growing fan base of tweaked bikes is owed to the riders’ search for a unique, personal style. “People want something others don’t have,” he says.

His workshop, called Angry Lane, is located on the 19th floor of an apartment building in Wong Chuk Hang. What started as a weekend passion project for the French national and his brother Ben in 2012 quickly grew into a full-fledged operation once people caught wind of it.

While trying to customize his Harley Davidson, Barras found that sourcing motorcycle parts was no easy task. Or at least that was the case when he started importing parts to Hong Kong. Japan was the go-to destination for custom parts but the suppliers there had no interest in working with individual overseas customers. At the time, Barras worked for Greenstar in a role supplying protective equipment and resources to MotoGP riders. He would order the parts he needed through his company.

Once fellow riders learned of Barras’ new operation, the orders began flooding in. In 2013, he received an order for a full custom motorcycle. 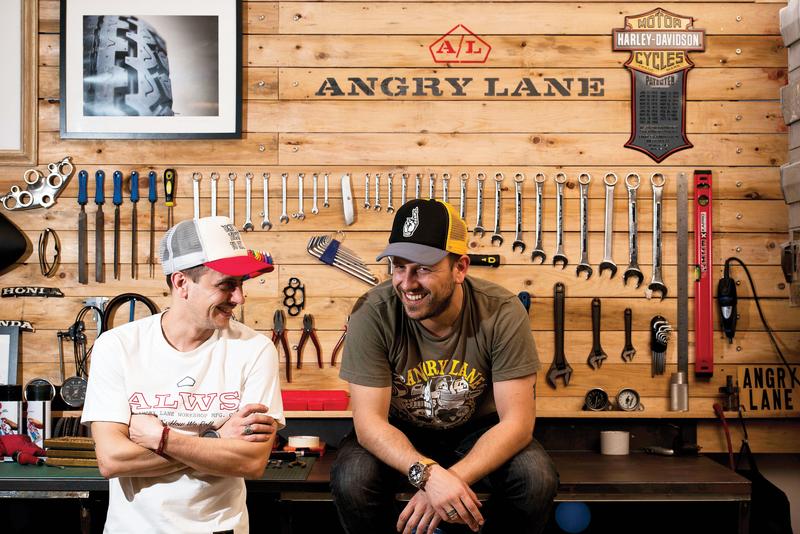 “Custom motorcycles have been in existence for 60 years,” says Barras. In the Sixties, motorcyclists would often drop a coin in a cafe jukebox on Hanger Lane — a main road in Ealing, London — then race to a certain point and back before the song finished. This gave birth to the terms “cafe racer” — describing motorcycles of Fifties and Sixties styling — and of course, “record racing”. Thanks to the French accent and some misinterpretation, Hanger soon became “Angry” and that’s how the Barras brothers’ brand found its name.

For Barras, much of the custom motorcycle culture revival began in 2006 with the founding of Sydney-based motorcycle and retail space, Deus Ex Machina. Its founder Dare Jennings began associating motorcycles with surfing and turned biking into a way of life, he says. The brand later expanded to California, Milan and Bali. In 2015 when Barras first opened Angry Lane, Jennings came by for the opening.

Custom motorcycling is seen as a form of self-expression through acquiring a personal style. “It’s the same as going to Louis Vuitton and asking for a custom bag,” Barras says. 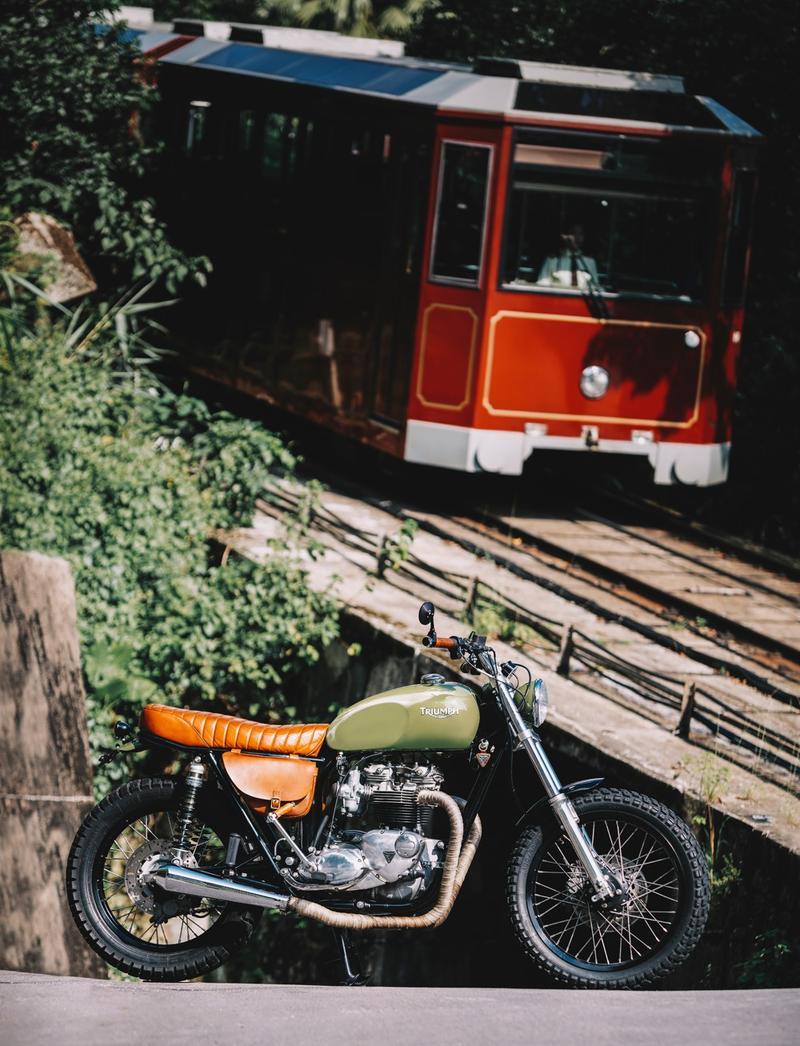 A way of life

Early in the evenings, a quiet corner of Ming Lun Street in To Kwa Wan is lit up by the roar of motorcycles. The meeting point is a four-year-old barbershop and tattoo parlor catering to local motorcyclists.

The 59 Tattoo and Barber Shop was co-founded by 37-year-old Mike Chau Kit-fung, a barber and vintage motorcycle enthusiast. Plastered with vintage posters of motorcycles,  the shop is inspired by the 1950s Church of England youth group known as The Fifty Nine Club or, more simply, “The 9” which soon became a hangout for rockers and motorcyclists. In 1968, the club defied a ban to screen the 1953 biker drama The Wild One.

Like The 9, Chau’s store too has become the local hangout for members of Hong Kong’s Street Retro Bikers Club (SRBC). Impressed by the club’s founder Felix Shu’s Fifties-style pompadour haircut, which would stay put even under a helmet, Chau began reading up about the craft of barbering. Eventually The 9 was born.

“I have evolved from a hair stylist to a barber since I liked motorcycles,” Chau says. 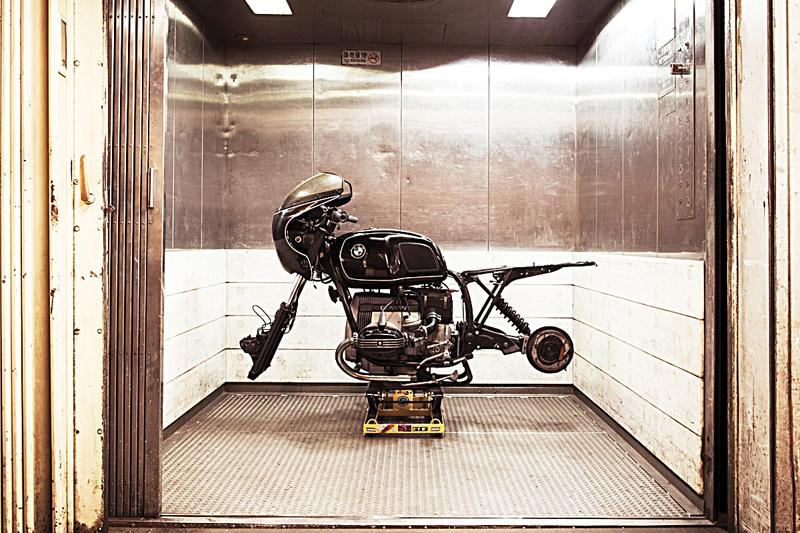 The skeleton of a 1980 BMW R80S motorcycle on its way to Angry Lane’s 19th-floor workshop. (PHOTO PROVIDED TO CHINA DAILY)

A phone call from Sydneysider Mark Hawwa in 2014 set the Barras brothers on a new path: Coordinating Hong Kong’s role in Distinguished Gentlemans Ride (DGR), one of the largest organized motorcycle rides in the world.  Barras couldn’t participate the first year but in 2015 he led a convoy of 35 riders down the streets of Central and Wan Chai on behalf of DGR to raise money for Movember — the practice of growing moustaches during November to raise awareness of male health issues. The 2019  edition kicks off this Sunday.

“Generally, bikers don’t have a very good image because bikes can be noisy,” says Barras. Although he has never personally encountered any trouble despite owning a loud bike, he says  the noise is often held against bikers, even before they actually arrive on the scene. Each year he makes a point of addressing the issue at the DGR. “Before we leave for the ride, I tell people, ‘We are doing this in a gentlemanly way. We are not here to make noise or do burnouts.’”

At the event, the roar of a single motorcycle is amplified by the convoy it travels in. The bikers wear button-front shirts,  neckties, vintage glasses and waistcoats. “Seeing riders together and so well-dressed is a first for a lot of people,” says Barras, adding that such an experience could help change perceptions.

The event is a small window into the world Barras operates in. He notes the community feel in the public’s response as well as the meet-and-greets before and after the events. In just four years, Hong Kong has become the largest fundraising city for the DGR in Asia, says Barras. 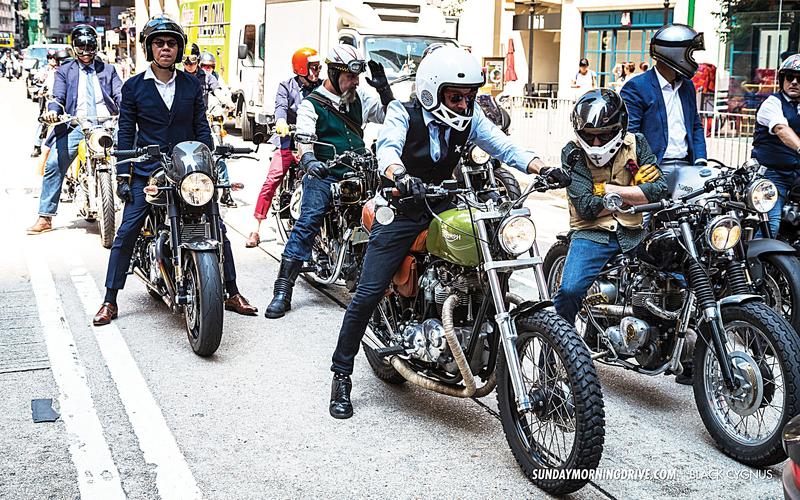 But there are still some challenges faced by motorcyclists in Hong Kong. Simon Bollix, a classic motorcycle mechanic and the owner of Simon’s Motorcyclists Workshop in San Po Kong, says that the city’s transport authorities often  impose restrictions on altering motorcycle designs.

“The regulations are a little bit archaic,” Bollix says. Laws require motorcycle parts and accessories to conform to strict measurements and such requirements restrict creative expression and sometimes common sense, he says. This in turn raises manufacturer costs in an already limited industry.

Online, social media platforms like Facebook have given space for niche motorcycle groups to express themselves, and sometimes turn enthusiasts and collectors into traders. However, with older bikes, Barras notes, sometimes parts can take months to find. Both Barras and Bollix often build their own motorcycle parts as a result but meeting local regulations can still be a burden.

“It’s a game of cat and mouse between the police, transport department and motorcyclists,” Bollix says. Some riders are stopped for regulation testing while others have never been stopped. “It’s the luck of the draw,” he says.

Regulations aside, Bollix concludes that the custom motorcycling culture in Hong Kong “is actually very good for what it is.”