MTR appeals to public for rationality

By Li bingcun and Chen Zimo 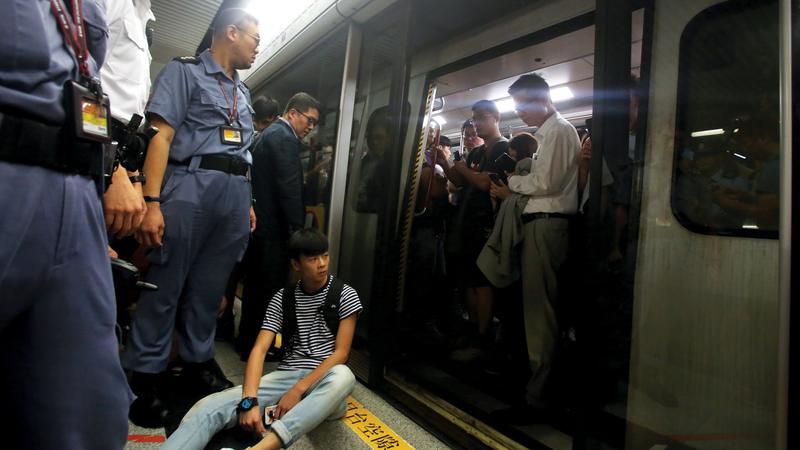 A protester against the now-suspended extradition law amendments disrupts an MTR train on Wednesday morning as part of an “uncooperative campaign” at the Admiralty station, Hong Kong Island. (CHINA DAILY)

HONG KONG-Commuters riding the subway to work on Wednesday morning were stranded in stations and train cars by delays as normal service was disrupted during rush hour by protesters staging what they called an “uncooperative campaign” against the now-suspended extradition bill.

Exasperated MTR attendants at the busiest stations tried their best to direct some impatient passengers to use alternative transport provided by the subway. Many passengers were enraged by the delay.

Julianna Wu, a 24-year-old office worker, said she had to take the bus because there were just too many people crowding into the subway stop near her home in North Point. That didn’t help much. “I waited for at least four buses in a long queue before I could get on one,” she said. It took her one-and-a-half hours to get to work. The trip usually takes no more than 30 minutes by subway.

Masked protesters on the platform stopped trains from leaving the station by blocking the doors. Some other protesters on board moving trains pressed the emergency button to stop the train.

According to regulations set by the railway operator, no one is allowed to activate any emergency or safety device on the railway premises, or interfere with the train doors or platform gates.

MTR Corp respects the public’s right to express their opinions, Kam said. But, he said, he hopes people would express them in a peaceful manner without affecting the safety of the passengers.

Train services gradually returned to normal from around 9:15 am.

A man surnamed Lam told China Daily he was late for work for about 15 minutes today as a result of the chaos.

“I had to wait for three trains before being able to get on one,” Lam said. He added it took the train much longer than needed to start again every time it pulled into the platform.