How do you save endangered gorillas? With lots of human help 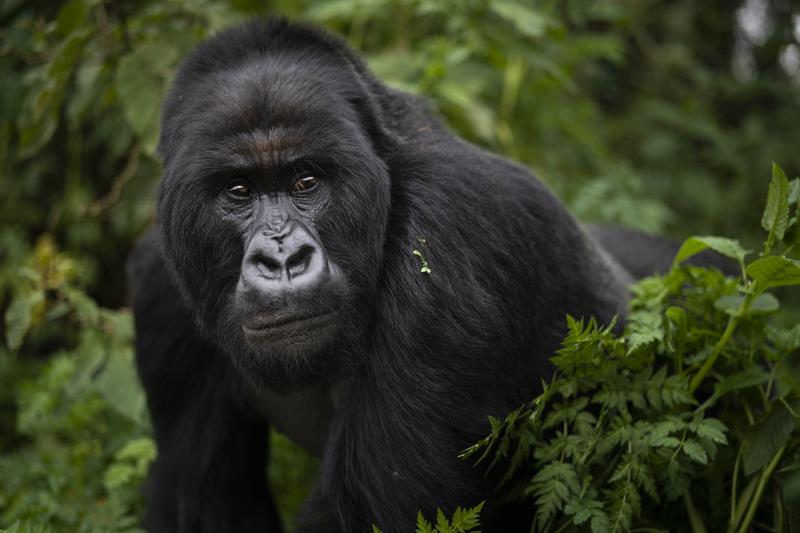 KINIGI, Rwanda — Deep in the rainforest of Volcanoes National Park, a 23-year-old female gorilla named Kurudi feeds on a stand of wild celery. She bends the green stalks and, with long careful fingers, peels off the exterior skin to expose the succulent inside.

Instead of disappearing, the number of mountain gorillas — a subspecies of eastern gorillas — has risen from 680 a decade ago to just over 1,000 today

Biologist Jean Paul Hirwa notes her meal on his tablet computer as he peers out from behind a nearby stand of stinging nettles.

The large adult male sitting next to her, known as a silverback, looks at him quizzically. Hirwa makes a low hum — "ahh-mmm" — imitating the gorillas' usual sound of reassurance.

Hirwa and the two great apes are all part of the world's longest-running gorilla study — a project begun in 1967 by famed American primatologist Dian Fossey.

Yet Fossey herself, who died in 1985, would likely be surprised any mountain gorillas are still left to study. Alarmed by rising rates of poaching and deforestation in central Africa, she predicted the species could go extinct by 2000.

Instead, a concerted and sustained conservation campaign has averted the worst and given a second chance to these great apes, which share about 98% of human DNA. Last fall, the Switzerland-based International Union for Conservation of Nature changed the status of mountain gorillas from "critically endangered" to "endangered," an improved if still-fragile designation. 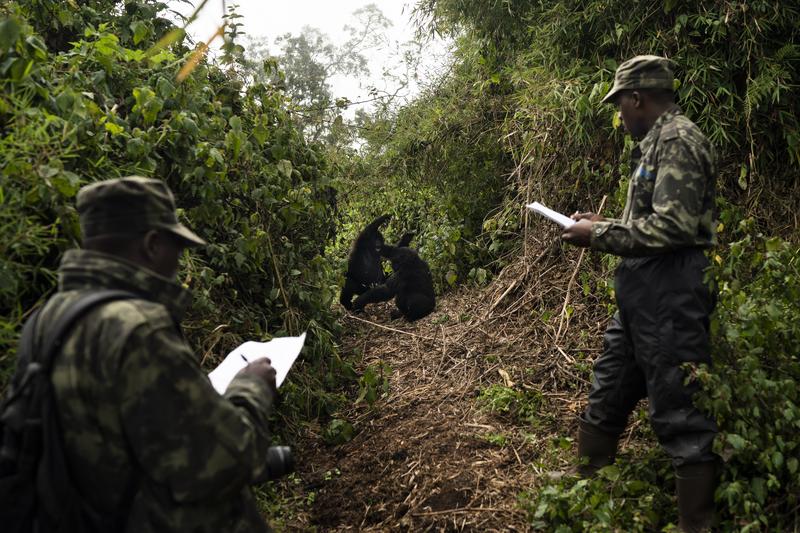 It wouldn't have happened without an intervention some biologists call "extreme conservation," which has entailed monitoring every single gorilla in the rainforest, periodically giving them veterinary care and funding forest protection by sending money into communities that might otherwise resent not being able to convert the woods into cropland.

Instead of disappearing, the number of mountain gorillas — a subspecies of eastern gorillas — has risen from 680 a decade ago to just over 1,000 today. Their population is split between two regions, including mist-covered defunct volcanoes within Congo, Uganda and Rwanda — one of Africa's smallest and most densely populated countries.

"The population of mountain gorillas is still vulnerable," says George Schaller, a renowned biologist and gorilla expert. "But their numbers are now growing, and that's remarkable."

Once depicted in legends and films like King Kong as fearsome beasts, gorillas are actually languid primates that eat only plants and insects, and live in fairly stable, extended family groups. Their strength and chest-thumping displays are generally reserved for contests between male rivals.

Every week, scientists like Hirwa, who works for the nonprofit conservation group the Dian Fossey Gorilla Fund, gather data as part of long-term behavioral research.

If they see any health problems in the gorillas, they inform the staff at Gorillas Doctors, a nongovernmental group whose veterinarians work in the forest. The vets monitor wounds and signs of respiratory infections, but intervene only sparingly.

When they do, they almost never remove the animals from the mountain. 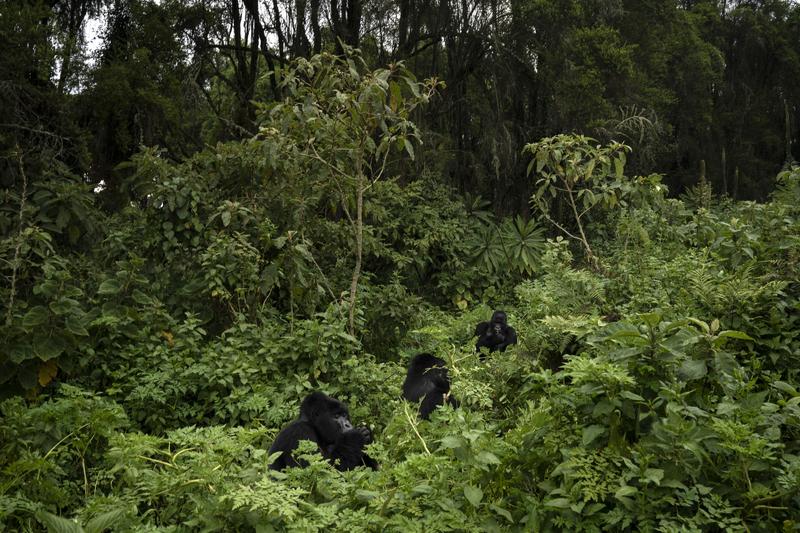 "Our hospital is the forest," says Jean Bosco Noheli, a veterinarian at Gorilla Doctors. When his team goes into the field to address a gorilla emergency, they must carry everything they might need in equipment bags weighing up to 100 pounds — including portable X-ray machines.

Schaller conducted the first detailed studies of mountain gorillas in the 1950s and early '60s. He also was the first to discover that wild gorillas could, over time, become comfortable with periodic human presence, a boon to researchers and, later, tourists.

Ticket revenue pays for operating costs and outstrips what might have been made from converting the rainforest to potato farms and cattle pastures. About 40% of the forest already was cleared for agriculture in the early 1970s.

"With tourism, the tension is always not to overexploit," says Dirck Byler, great ape conservation director at the nonprofit Global Wildlife Conservation, which is not involved in the Rwanda gorilla project. "But in Rwanda, so far they're careful, and it's working."

The idea of using tourism to help fund conservation was contentious when conservationists Bill Weber and Amy Vedder first proposed it while living in Rwanda during the 1970s and '80s. Fossey herself was skeptical, but the pair persisted.

"The wonder of the gorillas' lives, their curiosity, their social interactions — we felt that's something that could be accessible to others, through careful tourism," Vedder says.

Figuring out the balance of how many people could visit the forest, and for how long, was a delicate process of trial and error, Weber says.

In 2005, the Rwandan government adopted a model to steer 5% of tourism revenue from Volcanoes National Park to build infrastructure in surrounding villages, including schools and health clinics. Two years ago, the share was raised to 10%. 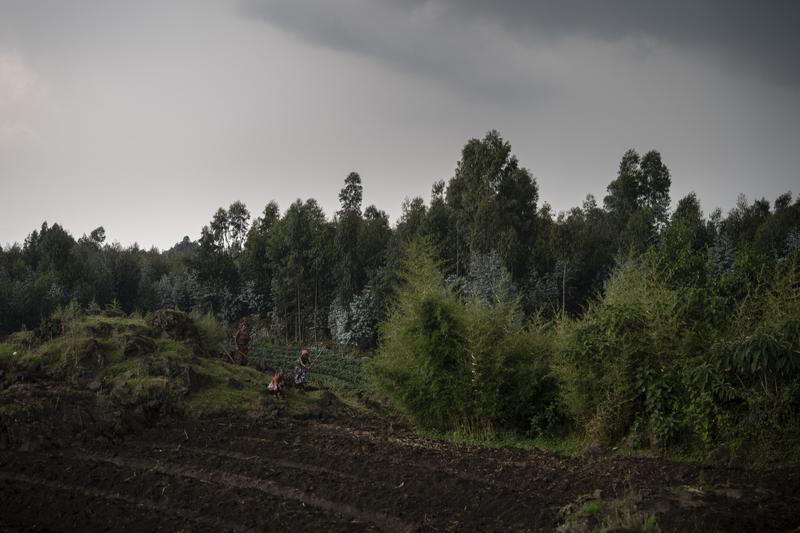 In this Sept 2, 2019 photo, farmers work on their land near the Volcanoes National Park in Kinigi, Rwanda. (FELIPE DANA / AP)

The money from tourism helps, but the region is still poor.

Jean Claude Masengesho lives with his parents and helps them farm potatoes. About once a week, the 21-year-old earns a little extra money helping tourists carry their bags up the mountain, totaling about US$45 a month. He would someday like to become a tour guide, which could earn him about US$320 monthly.

The obstacle is that most tour guides have attended college, and Masengesho isn't sure how his family can afford tuition.

"It's my dream, but it's very hard," he says. "In this village, every young person's dream is to work in the park."