After the eighth installment of the Fast and the Furious franchise raked in 1.3 billion yuan (US$184 million) at the Chinese box office in just three days last year, Universal Pictures decided to launch a spinoff to tap into the original series' runaway success.

Fast & Furious Presents: Hobbs & Shaw centers around the duo of Luke Hobbs, an agent of the US Diplomatic Security Service (Dwayne Johnson), and Deckard Shaw, a former elite British military operative (Jason Statham), and the one thing they have in common: family.

In the film, the quarreling two are forced to team up to stop terrorist Brixton (Idris Elba) from gaining control of a biological weapon that could change the fate of humanity and rescue Shaw's sister (Vanessa Kirby), an MI6 agent who had to inject herself with the virus during a special mission.

Hobbs and Shaw have been trying to take each other down with verbal insults and body blows ever since they first met in the seventh Fast and Furious outing.

"You know we hated each other," Johnson jokes at a news conference in Beijing.

The British action star says much of the on-screen chemistry between Hobbs and Shaw derives from how each of the characters sees himself as being much better than the other.

"Deckard Shaw thinks Hobbs is a bit of a slob. He's big and slow, and he dresses bad. He's like the opposite of how Deckard Shaw sees himself. They see each other as something that they don't want to be," Statham says.

Chris Morgan, who has been involved in the production of Fast and Furious series since the third installment, is again the scriptwriter for the film.

He wrote the story about Hobbs and Shaw out of his love for the two characters, and with a renewed desire to explore their backgrounds more deeply.

Morgan adds that since Fast Five, he and Johnson have been talking about how to expand the Fast and Furious franchise, and how to embody the image of the characters through storytelling.

"We have been daydreaming about what the other adventures might be, where Hobbs comes from, what things haunted him in the past, where we want him to go, and what kind of trials he might face," says Morgan.

Director David Leitch reveals that both Johnson and Statham played an active part in developing their own roles. And the effort Johnson put in this film didn't stop just there: the Hollywood superstar even named one of his dogs after his character. 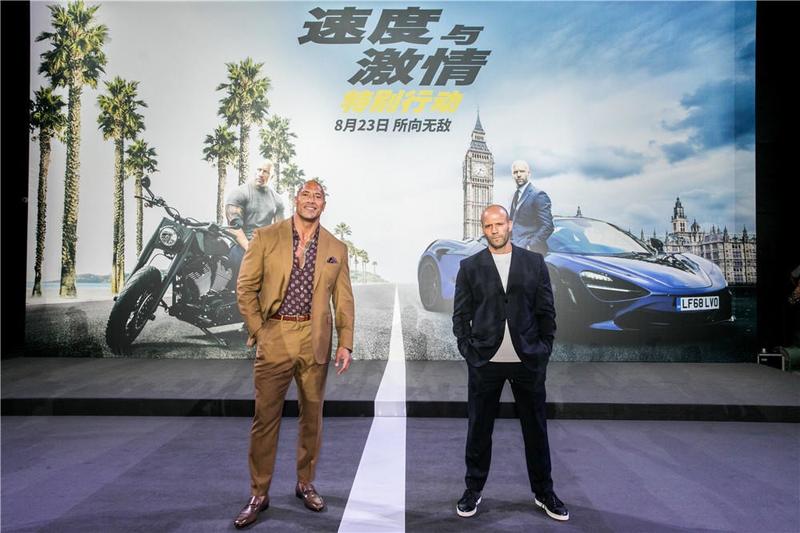 "In Hollywood, you usually play a character once. But from Fast Five to eight (The Fate of the Furious), I have already played Hobbs four times," says Johnson. "It's a character that I love playing, and it's just so much fun. He doesn't have any superpowers, he doesn't talk like a superhero－but he's doing things like one. It's my great honor to play him, and I've had a lot of great relationships coming out of my experience with Fast and Furious."

For this film, Johnson has managed to shape the role with his personal cultural background.

The location of the final battle is set in Samoa, an island in the southern Pacific Ocean where his mother was born. Johnson himself was born in California but grew up in Hawaii.

This prompted him to cast many of his Polynesian friends in the film, including his cousin, Roman Reigns, a famous World Wrestling Entertainment star and a friend of Johnson since his wrestling days.

Johnson reveals that Reigns was battling leukemia during the shoot, but he still came to the set in Kauai, Hawaii, and completed his first film surrounded by family and friends.

"We are all inspired by Reigns' strength, and luckily, he is currently recovering and back in the WWE, kicking ass," Johnson says, smiling.

Morgan describes a story he developed for the movie based on a true Johnson family story. In one scene, when Hobbs discovers he only has garden tools－a hoe and a pickax－to use as weapons at his home, his mother tells him to forget about guns and fight like a real man. The scene was actually based on a real life conversation that Johnson's grandmother had with his father decades previously. The moment Morgan heard the story, he knew he had to put it in film.

"I would say that Johnson and frankly all of us have been very collaborative over the years and have been active in shaping the character Hobbs in every single scene. The best idea always wins with all of us," Morgan says.

While the villains in the Fast and Furious films are always dramatic, the villain introduced in the spinoff is perhaps the baddest of them all.

Leitch says it was very hard to find a villain that could stand up to Hobbs and Shaw physically, so he created a gene-enhanced bad guy.

"Brixton's not the Terminator, but he has been applied with the next level of human augmentation and prosthetics. It's a cutting-edge, futuristic scenario," he says. 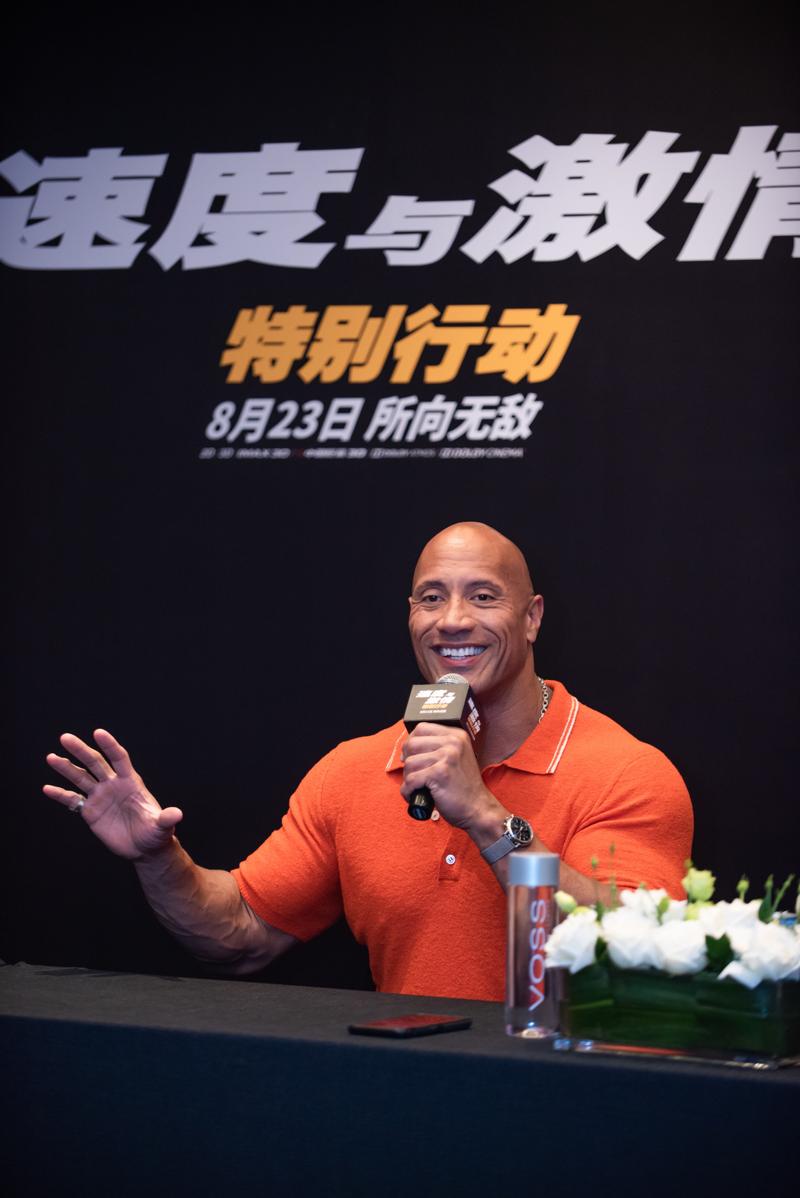 Brixton is eventually beaten by the combined will and strength of Hobbs and Shaw.

"In the islands, we have a word called 'mama', which means spirit. I wanted to deliver something different to the audience that shows you can overcome challenges, not with weapons, not with technology, but with 'mama'," says Johnson. "It was the first time that we had the opportunity to explore Samoan culture and present it to the world."

Surprisingly, actors Ryan Reynolds and Kevin Hart joined the cast in supporting roles. In the movie, the Deadpool star jokes about Game of Thrones and adds some pop culture references into the mix.

And for Chinese audiences, there could be an even bigger surprise in store with the sequel.

Johnson reveals that while Chinese actor Wu Jing couldn't take part in Hobbs and Shaw due to a scheduling conflict, he is destined to "absolutely" show up in the sequel to the spinoff.

"In Hollywood, people can easily put someone's face on a stuntman, and make anybody into an action star with computer-generated imagery and face-replacement techniques. It's very easy to make anybody look good. So for my entire career, my whole inspiration has only been through people like Bruce Lee, Jackie Chan, Jet Lee and Donnie Yen. These are the people that really inspire me, because they are authentic."

Already released in countries like the United States, Australia and France, the movie had banked US$437 million at the worldwide box office by Monday.

With a 67 percent rating on US movie review site Rotten Tomatoes, Ty Burr from the Boston Globe also praises the spinoff: "All the films in this franchise are family affairs, but you may find yourself wanting to spend more time on this branch of the tree." 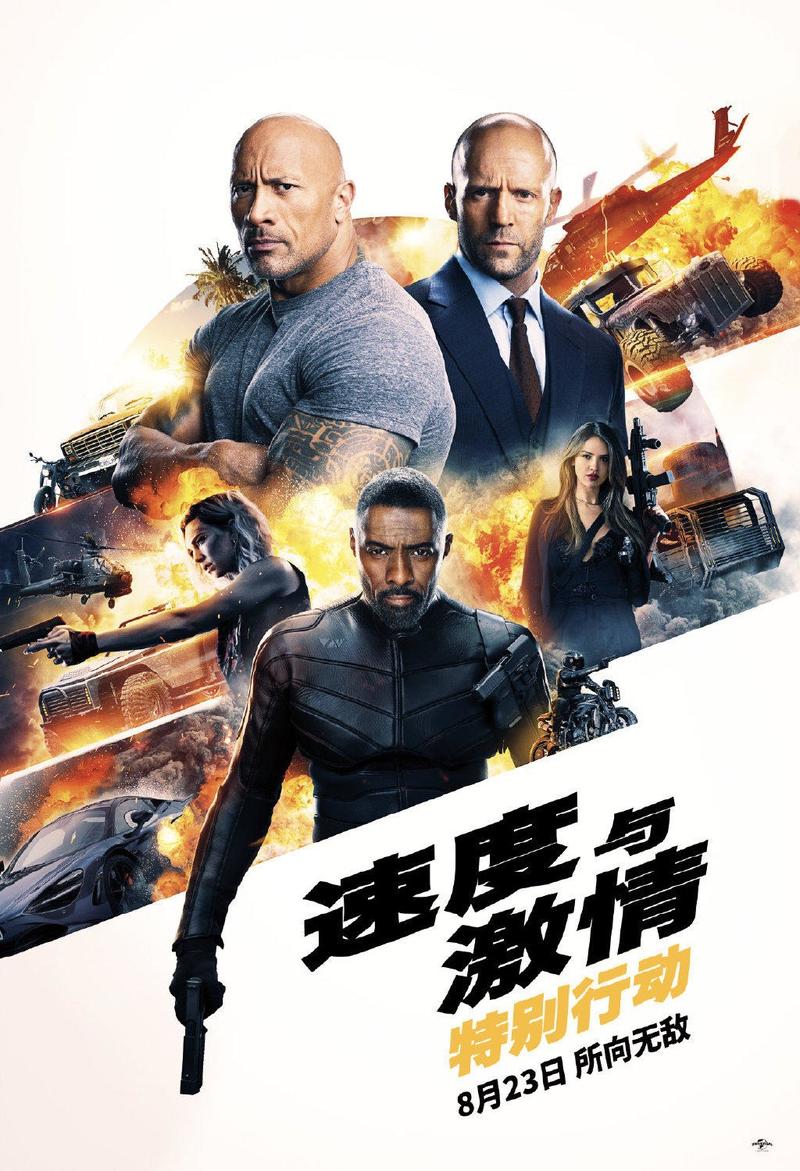 Justin Chang from the Los Angeles Times comments: "For better or worse, these are digitally souped-up blockbusters that haven't entirely lost touch with their humanity, even if Hobbs and Shaw, diverting as much of it is, could have used less snark and more soul."

For Joe Morgenstern from the Wall Street Journal, the set pieces are strong: "The action is impressive and the stars are personally as well as gladiatorially appealing, but the filmmakers seem to have shot the treatment instead of the script, or never bothered with a script."

But with the summer season in full swing, perhaps Michael O'Sullivan from the Washington Post best sums up the movie's appeal. "The film is far from prestige fare, yet more often than not, it hits that summer sweet spot between the silly and the satisfying."

The film is due to be released in cinemas across China on Friday.