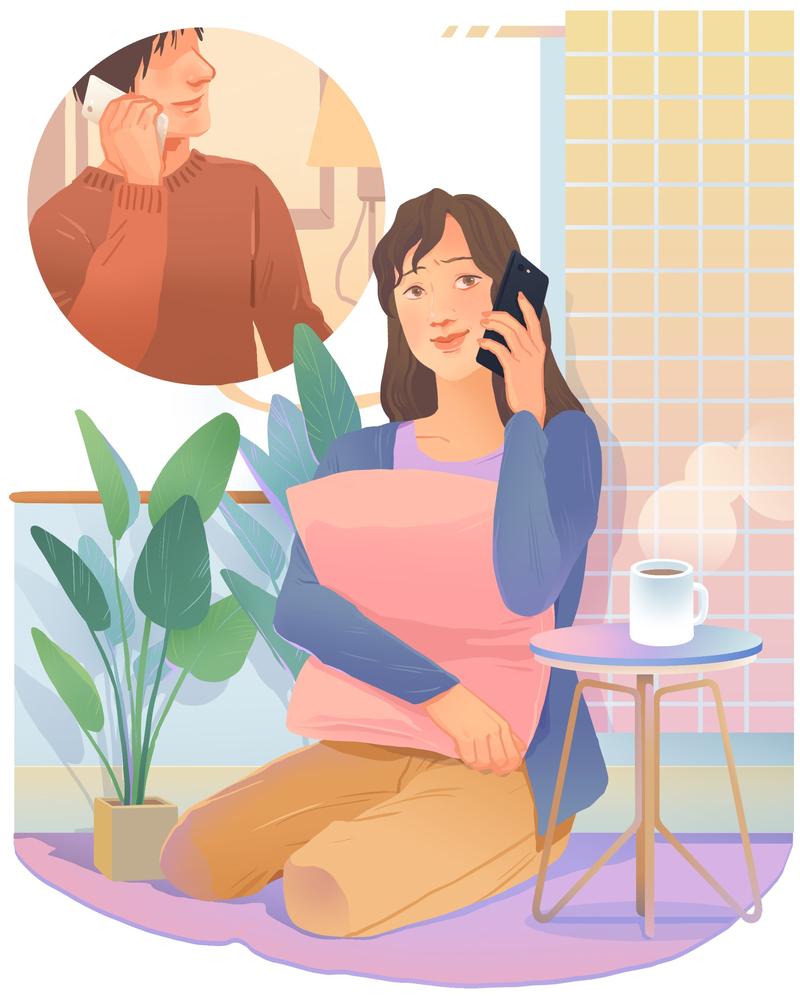 An online affair is pulling at the heartstrings, and padding the purse strings, of Wang Jiao.

Wang, 26, has been in a virtual "relationship" for almost two months, and now finds herself caring for the person she has been chatting with online "whenever possible" for each of the past 50 days.

"This feeling struck me when he cried on the phone after I teased him, saying he is not as handsome as some male vloggers (video bloggers). I found that I really care about him, which I am not supposed to do," said Wang, a safety engineer who works and lives in Qingdao, Shandong province.

Wang is being paid for the "relationship" by the Chinese college student, who is in his freshman year in the United States.

To earn her money, she must chat with him every day and make him feel as if she truly cares about him. The pay starts at 140 yuan (US$21) an hour, but rises to a monthly rate of 3,000 yuan three days after the first chat, and she must try her best to be available for him whenever he wants.

Wang earns a comfortable 8,000 yuan a month after tax from her full-time engineering job.

She does not need to talk constantly during their online sessions. For most of the time, she just "keeps in touch" and responds when the student messages her.

"It's more like a couple who have been together for a long time staying in the same room and minding their own business. But we are together virtually," Wang said.

No video calls can be made, Wang said when discussing some ground rules for the role.

The job description is "virtual lover". Such work has been available on Taobao, China's largest online shopping platform, since 2014. Taobao vendors hire teams of people, both male and female, to provide fake "love". Most of them are college students with plenty of free time.

Lan Li, a vendor who opened a store on Taobao providing this service in 2017, said a large part of the "love", involves listening to someone, accompanying them and being tender with them.

"This work is created for broken hearts," said Lan, a 22-year-old accounting major at a university in Nanjing, Jiangsu province.

She said people using the service spoke of being cheated in love, of misunderstandings and "heartbreaking" issues they cannot share with family members and close friends.

Up to 70 percent of the business at her store is from people paying strangers to listen to their "darkest secrets". Other work comes from students who want someone to talk to while doing their homework, people who need others to push them to finish work before a deadline, and video game players who want to compete with someone they "know virtually".

At the service's peak in late 2014, hundreds of vendors were catering to tens of thousands of "virtual lovers". On Nov 25 that year, the words "virtual lover" were searched a record 24,688 times on Taobao, according to a report by China Newsweek.

Yang Jun, an online store owner who was in the business for two years, said, "It used to be so lucrative that stores would see orders placed every few seconds. And 'lovers' were in such short supply that the only requirement to become one was the ability to speak."

The huge demand, accompanied by varying degrees of proficiency in the job, resulted in a wide range of prices being charged, ranging from just 3 yuan to 300 yuan per hour. In one extreme case, an online auction was organized, with the services of a popular "virtual boyfriend" being bid for at 100,000 yuan a month, Yang said.

By the end of 2014, however, Taobao cracked down on the industry, erasing any search results for key words such as "virtual lovers", "manga lovers", "boyfriends" or "girlfriends". The ban was introduced following media coverage of the service, with some reports stating that the business entailed soliciting, which is illegal in China.

However, dozens of such stores are still listed on Taobao, bypassing the regulations by describing their services as "good morning greetings" or "wake-up calls". They charge 20 yuan to 140 yuan per hour. In comparison, the minimum hourly wage rate set by the Shanghai Municipal Government is 21 yuan.

Wei Zhixin, a freelance writer who follows the topic, said that on the messaging app WeChat, a man named David is reportedly managing a similar business with more than 2,000 virtual lovers. Instead of running an e-store, however, David only "sells services" to regular customers or people introduced by them.

Zhang Wei, a 16-year-old girl in Tianjin, is one of the "hired lovers" in David's business. She heard about the work from a classmate who paid someone to help him with his homework. Eager to make some extra money, Zhang, the daughter of a truck driver and a laid-off worker, signed up for the work early this month.

Asked whether she was worried if the job would bring her any trouble, she quickly replied that she was not, as "what happens online stays online".

Paying customers get to choose when, the length of time and how (texts, voice messages or calls) they are going to be provided with "love". They can also select from a range of categories.

These include "neighborhood sweety", "cute Lolita" and "professional office ladies" for men; and "egoistical CEO", "understanding uncle" or "funny lad" for women. Essentially, though, these stereotypical roles are played by the same person, who is assigned by the store owner or operator to customers depending on their budget.

Lan, the Taobao vendor, said, "Those who want such services always manage to find them, and demand has always been strong."

She learned about the business while browsing the shopping website, and decided to give it a go with barely any investment. She received an offer from a multinational company's finance department, but said it is vital for her to be financially independent, as this is "crucially important" for women.

Business has been brisk since she started, and has grown by 10 percent annually. During the peak season, which starts at Christmas and takes in New Year, Spring Festival and the Western Valentine's Day, her store can take as many as 500 orders a month. Lan takes 50 percent of the money paid by customers, and the remainder goes to the virtual lovers.

"People who are alone feel even lonelier on days when love and festivals are celebrated," she said.

The number of single people in the country reached a record high of 240 million by the end of 2017, according to the China Statistical Yearbook compiled by the central government. The figure is almost the combined populations of France, Germany and the United Kingdom.

But with the easing of taboos against free love and sex, and the increasing availability of dating apps, why are Chinese teenagers and young adults spending their money on fake relationships and sharing their woes?

Lin Zi, a psychologist and marriage consultant in Shanghai, provided a list of reasons.

She said social media has made bonding appear easy, yet it can be superficial, as one person is able to simply "like" another on a mobile device.

The pursuit of success, which is largely defined by an individual's wealth, has not only surfaced in these relationships, but is also occupying young people's time and energy in pursuing emotional attachments. The rise of individualism - unprecedented in China - has further threatened the development of relationships, which are mainly based on compromise and tolerance, Lin said.

She added another reason that is distinctly Chinese - spreading only good news and covering up the bad, especially to family or close friends, along with the lack of professional psychological counseling.

"There is a deeply rooted and widely acknowledged notion to negate and ignore negative emotions," said Lin, who runs one of the first psychological clinics to be set up in China. A 90-minute counseling session at the clinic costs 2,400 yuan.

Professional psychological counseling emerged in the country at the end of the previous century, but has only been considered a vital service since 2008, when the devastating earthquake in Wenchuan, Sichuan province, killed tens of thousands of people and left many more heartbroken.

"When the two most important support systems for emotional crises - families and professional advisers - are absent, a new alternative naturally emerges, although not necessarily a healthy one," Lin added.

Zhang Jiehai, a sociology professor with the Shanghai Academy of Social Sciences, said it is more a matter of how young people are solving their problems, rather than with whom.

"It reflects the attitude of the millennial generation in China toward money - an omnipotent tool, instead of a treasured asset to be saved in the bank, as their parents did," Zhang said.

"If you dump your tears and complaints on friends today, it means you owe them a favor and you leave yourself open to them unburdening their troubles on you at a later date. When money is involved, this becomes one-way traffic," Zhang said.

But both Lin and Zhang said there is also a growing reluctance to "give" unconditionally and experience both the sweetness and sorrow of love.

For Wang, from Qingdao, "virtually loving" someone she might never meet in person is another problem.

"I am a real person and so is he. And I know that when he cried, my worries and anxiety were real. Sometimes it's hard to tell which part is virtual," she said.

She decided to start this work because acting as a virtual girlfriend is a good way to boost her monthly income.

She has told those close to her about her work, including her boyfriend in real life. But she stopped updating him about it when her virtual boyfriend subscribed to her service for a second month.

* The names of the virtual lovers and store owners in this story have been changed to protect their identities.