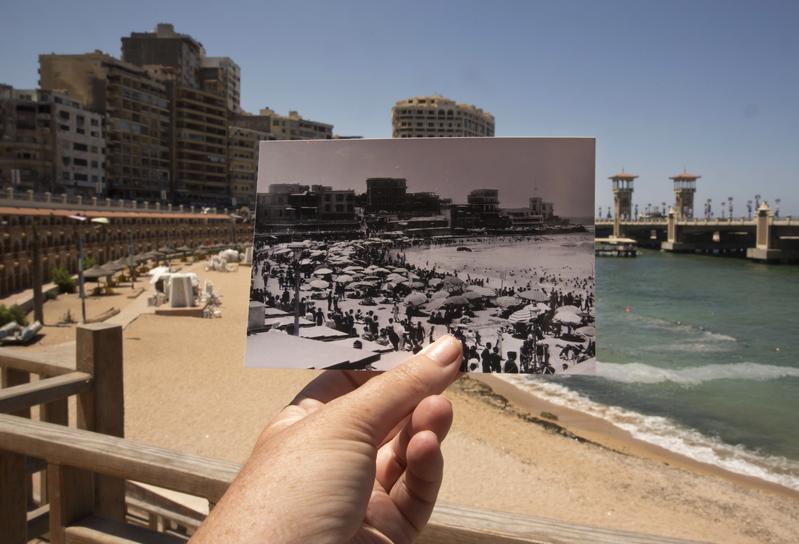 ALEXANDRIA, Egypt — Egypt's coastal city of Alexandria, which has survived invasions, fires and earthquakes since it was founded by Alexander the Great more than 2,000 years ago, now faces a new menace in the form of climate change.

Egypt's Ministry of Water Resources and Irrigation says the sea level rose by an average of 1.8 millimeters annually until 1993

Rising sea levels threaten to inundate poorer neighborhoods and archaeological sites, prompting authorities to erect concrete barriers out at sea to break the tide. A severe storm in 2015 flooded large parts of the city, causing at least six deaths and the collapse of some two dozen homes, exposing weaknesses in the local infrastructure.

Alexandria, the country's second city, is surrounded on three sides by the Mediterranean Sea and backs up to a lake, making it uniquely susceptible to the rise in sea levels caused by global warming and the melting of the polar ice caps.

Back in the late 1940s and 1950s, it was a haven for writers and artists that drew both Egypt's well-heeled and foreign tourists for its beauty and charm. Today, more than 60 kilometers of waterfront make it a prime summer destination for Egyptians, but many of its most famous beaches already show signs of erosion.

The UN Intergovernmental Panel on Climate Change has warned that global sea levels could rise by 0.28 to 0.98 meters (1-3 feet) by 2100, with "serious implications for coastal cities, deltas and low-lying states."

Experts acknowledge that regional variations in sea level rise and its effects are still not well understood. But in Alexandria, a port city home to more than 5 million people and 40% of Egypt's industrial capacity, there are already signs of change. 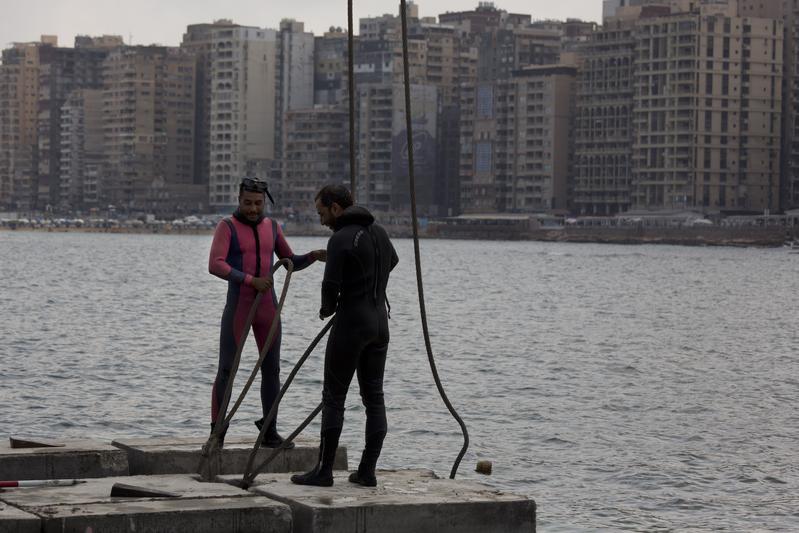 In this Aug 8, 2019 photo, workers prepare to place cement blocks to stave off rising water levels near the corniche in Alexandria, Egypt. (MAYA ALLERUZZO / AP)

Egypt's Ministry of Water Resources and Irrigation says the sea level rose by an average of 1.8 millimeters annually until 1993. Over the following two decades that rose to 2.1 millimeters a year, and since 2012 it has reached as high as 3.2 millimeters per year, enough to threaten building foundations.

The land on which Alexandria is built, along with the surrounding Nile Delta, is sinking at roughly the same rate, due in part to upstream dams that prevent the replenishment of silt and to natural gas extraction. That is expected to exacerbate the effects of the rise in sea level, with potentially catastrophic consequences.

Residents living in low-lying areas are already coping with the consequences. A 52-year-old resident of the Shatby neighborhood, who goes by Abu Randa, said he has repaired his three-story home twice since the 2015 floods.

"We know it is risky. We know that the entire area will be underwater, but we have no alternative," he said.

In the el-Max neighborhood, hundreds of people were forced to leave their homes after severe flooding in 2015. The Housing Ministry built nine apartment blocks to house them after declaring the area unsafe.

Sayed Khalil, a 67-year-old fisherman from the neighborhood, said the homes have flooded with seawater every winter in recent years, from both the nearby shore and a canal running through the area.

"It is hard to imagine that el-Max will be here in a few decades," said Khalil. "All these houses might vanish. The area you see now will be an underwater museum."

Authorities installed sea defenses to protect the neighborhood, which is home to an oil refinery, a cement plant and tanneries, but residents say it hasn't made much of a difference. 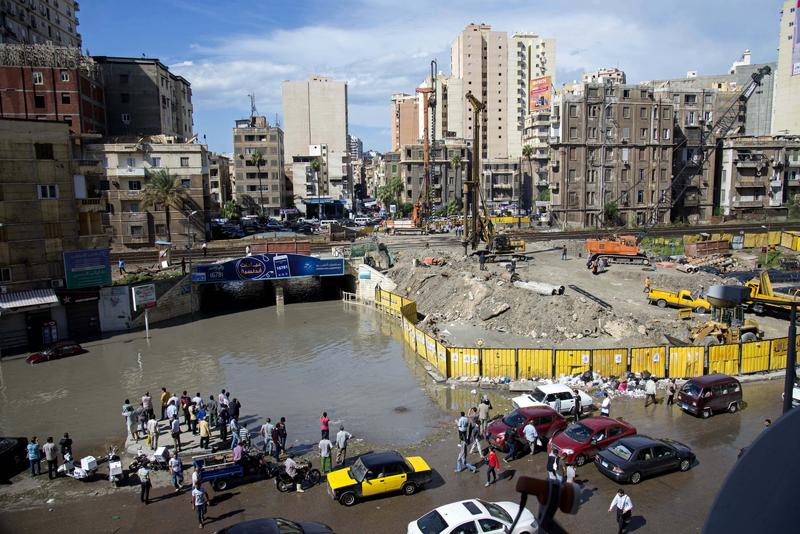 In this Oct 25, 2015 photo, Egyptians check floodwaters after a heavy rainfall in the coastal city of Alexandria, Egypt. (HEBA KHAMIS / AP)

"Every year the waves are much stronger than the previous year," Abdel-Nabi el-Sayad, a 39-year-old fisherman, said. "We did not see any improvement. They just forced people to leave."

The city's antiquities sites — those that survived its tumultuous history — are also under threat.

The Pharos Lighthouse, once among the tallest man-made structures and one of the seven wonders of the ancient world, was toppled by an earthquake in the 14th century. The famed Alexandria Library burned to the ground when Julius Caesar set fire to an enemy fleet in 48 BC.

But the citadel of Qaitbay, a medieval fortress built on the ruins of the lighthouse at the end of a narrow peninsula jutting into the sea, still looms over the city's sprawling central harbor, just across from the modern Library of Alexandria, a research center inaugurated in 2002.

Ashour Abdel-Karim, head of Egyptian General Authority for Shores Protection, said the citadel is especially vulnerable. He said the increasingly powerful waves and currents had pushed into the foundations, forcing authorities to install a long line of concrete sea barriers visible from the built-up downtown waterfront, known as the Corniche.

The Egyptian government, which has been struggling to rebuild the economy after the unrest following the 2011 Arab Spring, has allocated more than US$120 million for the barriers and other protective measures along the shore, Abdel-Karim said.

"Without such barriers, parts of the Corniche and buildings close to the shore would be damaged," at an estimated cost of nearly US$25 billion, he said.

Inland sites are also at risk, including Kom el-Shouqafa, catacombs dating back to the 2nd century AD with architectural stylings inspired by ancient Egypt. It and other sites flooded in 2015. 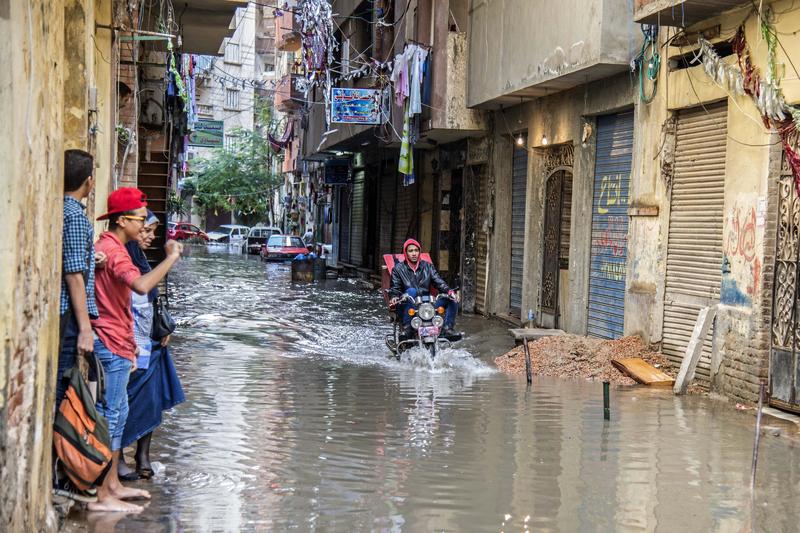 In this Oct 25, 2015 photo, a motorcyclist rides through flood water in the coastal city of Alexandria, Egypt. (HEBA KHAMIS / AP)

Prophet Daniel Street downtown is considered one of the world's oldest, and today runs past a mosque, a synagogue and St Mark's Church, the seat of the Coptic Christian patriarchate.

Mohammed Mahrous, who works for a bookstore on the street, remembers when the shop was closed for a week after the 2015 flood.

"We are aware that this street, which survived for hundreds of years, could be underwater in the coming years, in our lifetime," he said. "Every year the waves are stronger than in the previous one. The winter is harsher and the summer is more sweltering."