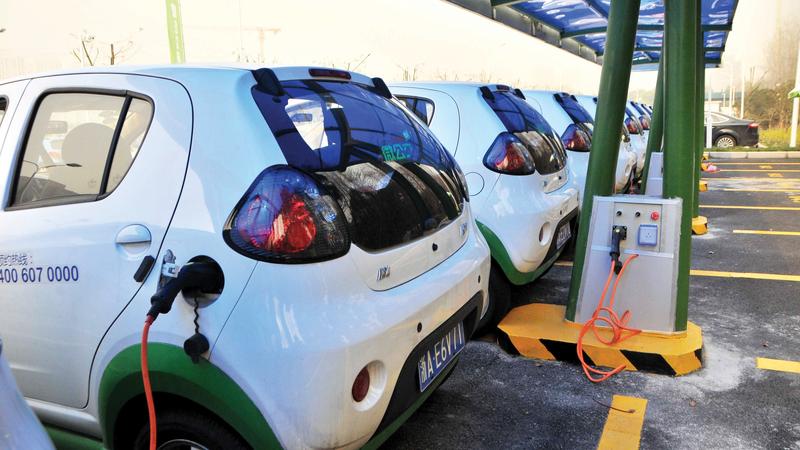 China’s quest to steer the world’s largest auto market away from combustion engines to a battery-powered future has triggered a new gold rush — lithium.

For years, the silvery-white alkali metal has mainly been used in the manufacture of aircraft and in the treatment of bipolar disorder. But with the development of electric cars, smartphones, electric bicycles, and household solar storage, demand for lithium has increased dramatically.

Some analysts are expecting demand for lithium — a key ingredient in lithium-ion batteries — could treble over the next decade, with much of that demand in China.

In 2015, China overtook the United States to become the world’s biggest market for electric cars, providing a huge domestic market for battery makers.

China has set a goal of selling 2 million new-energy cars a year by 2020. The country has the world’s largest number of electric vehicle (EV) manufacturers and the largest network of charging points.

A total of 777,000 new-energy cars were sold in 2017, up 53.3 percent year-on-year, according to statistics from the China Association of Automobile Manufacturers. The new-energy category includes pure electric and plug-in gasoline-electric hybrids.

“Lithium is coming of age in a big way. It is the core ingredient to 99 percent of electric vehicles and as a result, demand is going through the roof,” Simon Moores told CNBC late last year. Moores is managing director at Benchmark Mineral Intelligence, a research and data provider specializing in the lithium-ion battery supply chain.

He said demand for lithium had been “bubbling under the surface” for several years, before a renewed interest in electric cars about 18 months ago triggered a “desperate” global pursuit.

He said lithium is an integral component of the long life and rechargeable battery systems of EVs and solar power battery units.

He said the demand for lithium will continue to increase with “better public uptake of electric vehicles, solar power and other intermittent renewable power sources which require efficient battery storage technologies”.

“Beijing sees it as a means to reduce the country’s dependence on oil imports, tackle chronic air pollution, meet its (Paris Agreement) climate targets and create a poster child for the Made in China 2025 initiative to upgrade the manufacturing sector,” he said in a report, China’s Lithium Supply Chain Strategy.

For China to bolster its supply of lithium, Beijing will likely pursue three strategic objectives in the coming years — namely, to develop its domestic lithium resources, diversify its lithium imports, and increase its influence over the global lithium value chain, according to Brennan.

“The progress China makes toward furthering these goals will go a long way to determining to what extent it can meet its EV ambitions,” he said.

State Grid Corporation of China (SGCC) on March 9 forecast a 60 percent increase in EV sales in China, which already accounts for the lion’s share of EVs worldwide.

At CERAWeek, an annual energy conference organized in Houston, Texas, by analytics company IHS Markit, SGCC executive vice-president Wang Min was quoted by Xinhua as saying there were 3.2 million EVs around the world by the end of last year. More than half of them, or 1.7 million, were in China.

SGCC has built the world’s largest Internet of Vehicles network in terms of coverage and number of devices, connecting 17 charging facility operators and providing access to about 170,000 charging piles, Wang told the gathering, as reported by Xinhua.

Besides using cutting-edge technologies, such as big data and cloud computing, SGCC has also achieved universal plug-in and payment methods for most charging piles nationwide. EV owners can use a mobile app to locate nearby charging piles.

Although China does mine lithium, it needs to secure much more if it is to meet its ambitious targets for electric cars.

The government is targeting 7 million vehicles by 2025. Some of the major domestic manufacturers include BYD (backed by US billionaire investor Warren Buffett), SAIC Motor, BAIC Motor, Great Wall Motor and Geely Automobile. In the luxury bracket, Chinese startup NIO is positioning itself as a challenger to Silicon Valley-based Tesla.

China is already the world’s largest consumer of lithium, and domestic demand is set to skyrocket over the coming decades as China switches to EVs.

“The pressure to improve self-sufficiency in supplies of lithium mineral resources (and in other minerals and metals essential in the production of batteries) mirrors the pressure the country faces to reduce its reliance on energy imports,” said Verisk Maplecroft’s Brennan.

According to Verisk Maplecroft’s Energy Security Index, China still needs to import around half of its energy needs.

According to the US Geological Survey, China is home to the world’s fourth-largest lithium resources and second-largest reserves. Yet it accounts for only 6 percent of global mine production, placing it far behind heavyweights such as Australia (41 percent), Chile (34 percent) and Argentina (16 percent).

“Despite the challenges associated with large-scale, commercially viable exploitation, China’s lithium mining industry will no doubt receive extensive State-backed investment and policy support this year, and in the future, as Beijing seeks to reduce its external dependency,” Brennan said.

China imports the bulk of its lithium supply from the big three producers: Chile, Argentina and Australia.

“To reduce its reliance on just a handful of suppliers, Beijing will need to diversify the source of its lithium imports, replicating a model it has successfully adopted in the hydrocarbon sector,” said Brennan.

“Chinese firms are likely to receive official encouragement to sign offtake agreements and strategic partnerships with companies from mid-tier and emerging production hubs — such as Zimbabwe, Brazil, Bolivia and Canada — to create a more diverse import model,” he said.

In the US, most EV makers do not make their own batteries, according to James Whiteside, principal consultant with global energy consultancy Wood Mackenzie.

“Apart from Tesla, which has a joint venture with Panasonic, US manufacturers source their batteries from South Korea, Japan and Germany,” he told China Daily Asia Weekly.

“It’s quite a complex and fragmented supply chain,” Whiteside said. “The battery manufacturers themselves can source the lithium-containing components from domestic, integrated or foreign sources.

“The cathode is the main lithium-containing component and, in 2017, 63 percent of capacity was located in China. China, in turn, sources lithium chemicals for the cathodes from Australia, Chile and Argentina, as well as some growing domestic production.”