Mountain of impeachment evidence beyond dispute 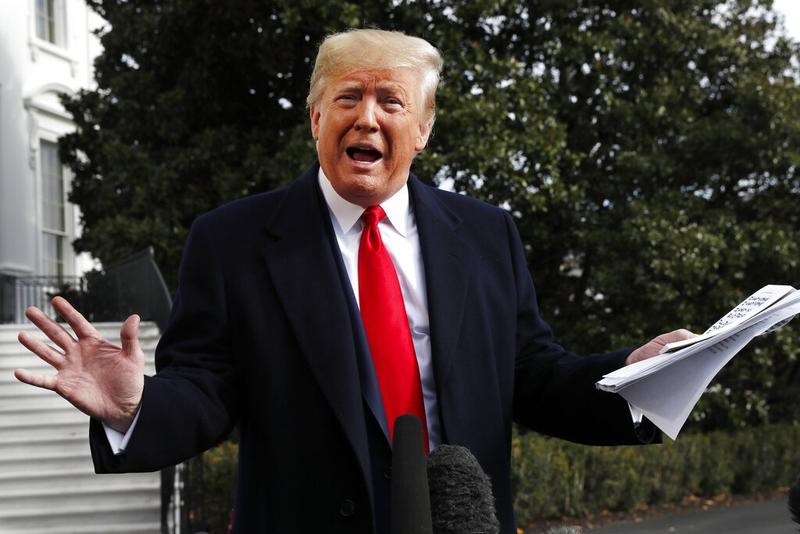 US President Donald Trump holds handwritten notes as he speaks to the media about the House Intelligence Committee testimony of US Ambassador to the European Union Gordon Sondland, Nov 20, 2019, as Trump leaves the White House in Washington, en route to Texas. (JACQUELYN MARTIN / AP)

WASHINGTON — After two weeks of riveting public hearings in the House impeachment inquiry into President Donald Trump, there is a mountain of evidence that is now beyond dispute.

The witness accounts left one prominent hole that offered a lifeline for Trump and his GOP allies. None of the witnesses could personally attest that Trump directly conditioned the release of the US$400m in military aid on a Ukrainian announcement of probes into former VP Joe Biden & the Democratic National Committee

Trump explicitly ordered US government officials to work with his personal attorney Rudy Giuliani on matters related to Ukraine, a country deeply dependent on Washington's help to fend off Russian aggression. The president pushed Ukraine to launch investigations into political rivals, leaning on a discredited conspiracy theory his own advisers disputed. And both American and Ukrainian officials feared that Trump froze a much-needed package of military aid until Kyiv announced it was launching those probes.

Those facts were confirmed by a dozen witnesses, mostly staid career government officials who served both Democratic and Republican administrations. They relied on emails, text messages and contemporaneous notes to back up their recollections from the past year.

Stitched together, their hours of televised testimony paint a portrait of an American president willing to leverage his powerful office to push a foreign government for personal political help. That alone has many Democrats on the brink of voting to impeach Trump before the end of the year, potentially pushing toward a trial in the Senate.

Yet the witness accounts left one prominent hole that offered a lifeline for Trump and his GOP allies. None of the witnesses could personally attest that Trump directly conditioned the release of the US$400 million in military aid on a Ukrainian announcement of investigations into former Vice President Joe Biden and the Democratic National Committee.

Some Republicans suggested that even if that link could be made, it wouldn't be enough for them to support impeaching Trump and removing him from office. And without that link, Trump's wall of support among GOP lawmakers seems formidable.

"I have not heard evidence proving the president committed bribery or extortion," said Rep Will Hurd, a moderate Republican from Texas who is retiring from Congress next year and would be a bellwether for any signs of weakness in GOP support for the president. Like some other Republicans, he made clear he found Trump's actions "inappropriate" — just not impeachable.

Democrats now face the prospect of a House impeachment vote split along party lines. That would mirror public polling, which shows Americans divided over whether Trump should be impeached for his dealings with Ukraine and removed from office.

With the public hearings complete, Democrats are now urgently plotting the way forward with a limited blueprint in just the nation's fourth impeachment proceeding. 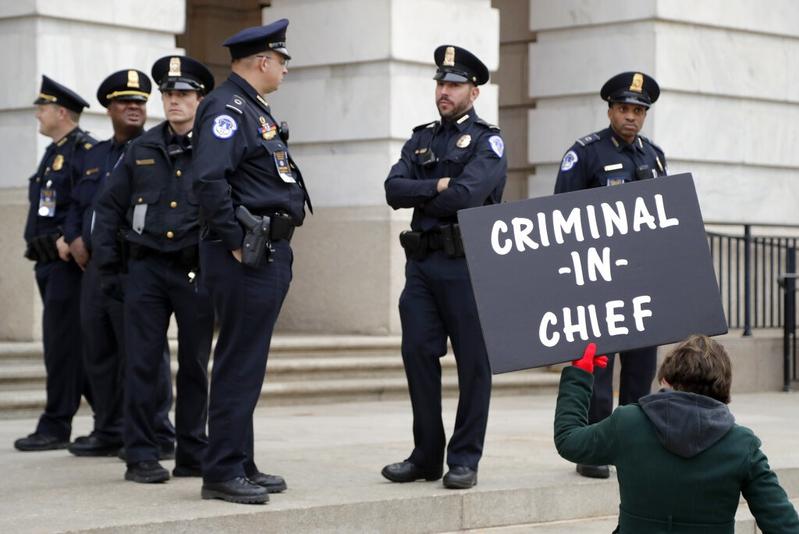 Capitol Police officers stand near a demonstrator holding a sign outside of Longworth House Office Building, where former White House national security aide Fiona Hill and David Holmes, a US diplomat in Ukraine, are testifying before the House Intelligence Committee on Capitol Hill in Washington, Nov 21, 2019, during a public impeachment hearing of President Donald Trump's efforts to tie US aid for Ukraine to investigations of his political opponents. (JULIO CORTEZ / AP)

They must first decide whether to begin drafting articles of impeachment based on what has been revealed to this point or to launch a long-shot bid for testimony from additional witnesses who could provide more direct evidence of Trump's actions.

There are indeed officials who would likely be able to fill in some of the blanks. Democrats have requested testimony from acting White House Chief of Staff Mick Mulvaney and former National Security Adviser John Bolton, men who spent hours alongside Trump in the West Wing and whose names popped up repeatedly in the recollections of other officials.

In a pointed moment in Thursday's testimony, former White House national security official Fiona Hill said she believes "those who have information that the Congress deems relevant have a legal and moral obligation to provide it."

Yet it appears unlikely that Bolton and Mulvaney will tell their stories to Congress. Citing executive privilege, both men have filed court cases to determine if they must appear. And House Speaker Nancy Pelosi said Thursday that she didn't want the next steps in the inquiry to be "at the mercy of a court."

That's fine with many Democrats who say the bar for impeachment has already been cleared through the methodical case built over the past two weeks. The diplomats and national security officials testified that they repeatedly raised alarms over the administration's dealings with Ukraine and described urgent efforts to help leaders in Kyiv boost their standing with Trump in order to secure the military aid.

William Taylor, the top American diplomat in Kyiv who opened the hearings, vividly cast the security assistance as a matter of life or death for Ukrainian soldiers in a hot war with Russia. He said he was left deeply unsettled by the prospect of the Trump administration abandoning American partners abroad.

Lt Col Alexander Vindman, a White House Ukraine adviser who testified in his Army uniform bedecked with medals, said he was shaken as he heard Trump ask Ukrainian President Volodymyr Zelenskiy to investigate Biden and the DNC in the July 25 phone call that launched the impeachment probe. Vindman, whose family fled Ukraine when he was 3, was forced to defend himself against charges from Trump allies that he had divided loyalties.

And U.S. Ambassador to the European Union Gordon Sondland made clear the effort to extract investigations from Ukraine wasn't a secret within the administration. He declared, "Everyone was in the loop."

The case Democrats plan to make in the coming days as they try to sway both Republicans and the American people is that the impeachment inquiry isn't just about Trump's future. It's about what Americans should expect from their president.

Asked what the consequences are if Congress allows an American president to ask a foreign government to investigate a political rival, Hill said simply, "It's a very bad precedent."