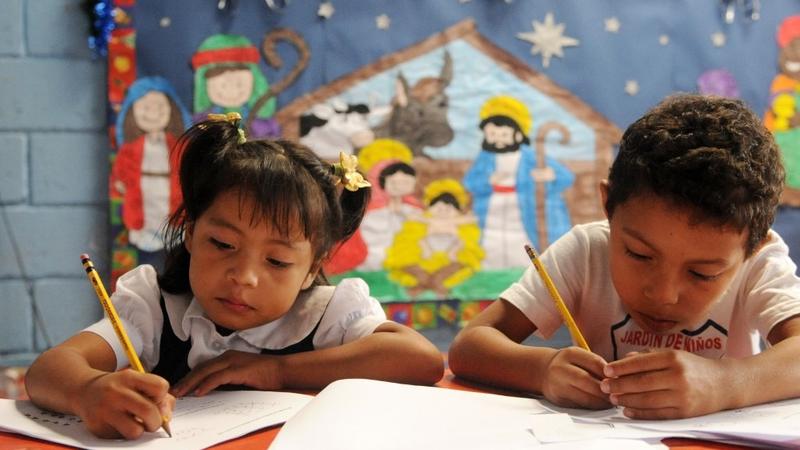 Pupils make an exercise during a class at a nursery school in Tegucigalpa, capital of Honduras, on Nov 13, 2012. (ORLANDO SIERRA / AFP)

UNITED NATIONS - More than 175 million children, about half of all pre-primary-age children globally, are not enrolled in pre-primary education, said the United Nations Children's Fund (UNICEF) in a report released on Tuesday.

Pre-primary schooling is our children's educational foundation -- every stage of education that follows relies on its success. Yet, too many children around the world are denied this opportunity.

"Pre-primary schooling is our children's educational foundation -- every stage of education that follows relies on its success," said UNICEF Executive Director Henrietta Fore. "Yet, too many children around the world are denied this opportunity. This increases their risk of repeating grades or dropping out of school altogether and relegates them to the shadows of their more fortunate peers."

The report noted that household wealth, mothers' education level and geographical location are among the key determinants for pre-primary attendance. However, poverty is the single largest determining factor.

Across 64 countries, the poorest children are seven times less likely than children from the wealthiest families to attend early childhood education programs, according to the report.

READ MORE: UNICEF: Get our children involved in novel projects

More than two-thirds of pre-primary-age children living in 33 countries affected by conflict or disaster are not enrolled in early childhood education programs. Yet, these are the children for whom pre-primary education has some of the greatest benefits.

Pre-primary education helps young children affected by crises overcome the traumas they have experienced by giving them a structure, a safe place to learn and play, and an outlet to express their emotions, according to the report.

Across countries with available data, children born to mothers who have completed secondary education and above are nearly five times more likely to attend an early childhood education program than children whose mothers have completed only primary education or have no formal education, finds the report.

Pre-primary education remains acutely under-funded, according to the report.

This lack of worldwide investment in pre-primary education negatively impacts the quality of services, including a significant lack of trained pre-primary teachers, according to the report.

Together, low- and lower middle-income countries are home to more than 60 percent of the world's pre-primary-age children, but scarcely 32 percent of all pre-primary teachers.

"If today's governments want their workforce to be competitive in tomorrow's economy, they need to start with early education," Fore said. "If we are to give our children the best shot in life to succeed in a globalized economy, leaders must prioritize and properly resource pre-primary education."

UNICEF is urging governments to make at least one year of quality pre-primary education universal and a routine part of every child's education, especially the most vulnerable and excluded children.

To make this a reality, UNICEF urges governments to commit at least 10 percent of their national education budgets to scale up early childhood education and invest in teachers, quality standards, and equitable expansion.

With expanding populations, assuming an ideal pupil-teacher ratio of 20 to 1, the world will need 9.3 million new pre-primary teachers to meet the universal target for pre-primary education by 2030, according to the report.