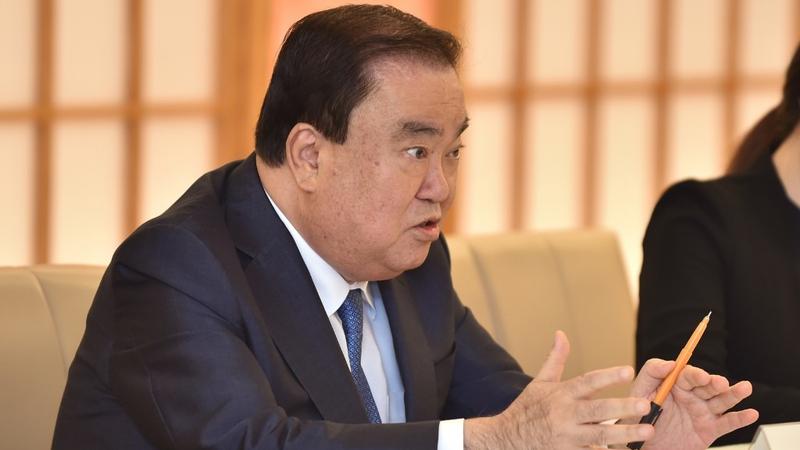 South Korean special presidential envoy Moon Hee-Sang speaks during a meeting with Japanese Foreign Minister Fumio Kishida (not in picture) at the foreign ministry in Tokyo on May 17, 2017. (KAZUHIRO NOGI / POOL / AFP)

The speaker of South Korea’s National Assembly apologized for comments he made concerning Japan’s emperor earlier this year that caused a diplomatic fight between the neighbors and made their already troubled relations even worse.

“I apologize to people who were hurt,” he was quoted as saying. The remark would be a reversal for Moon who said shortly after the February incident that he saw no reason to apologize over the comment described as “extremely inappropriate” by Japanese Prime Minister Shinzo Abe.

Moon’s office was not immediately available for comment. Hatoyama’s office made a social media post where it confirmed that Moon apologized for the remarks about the emperor. Japanese Chief Cabinet Secretary Yoshihide Suga declined to comment Friday on the reports.

Moon’s comments about the emperor came during a Bloomberg interview in February, in which he was asked how the two sides could resolve their long-running disagreements over Japan’s 1910-45 occupation of the Korean Peninsula. Moon said an apology from the emperor before his planned abdication in May would be most meaningful, since he was “the son of the main culprit of war crimes.”

A foreign politician making demands of the emperor did not sit well in Japan, where the emperor is held in high esteem as a symbol of the Japanese people.

Emperor Akihito, who abdicated after three decades on the Chrysanthemum Throne, had made unprecedented apologies for the wartime aggression launched in the name of his father, Hirohito -- posthumously named the Emperor Showa. This helped ease often fraught relations with neighbors China and South Korea, which bore heavy blows from Japan’s militarism.

South Korea’s political leaders have criticized Japan for not showing what they see as proper contrition for its militarist past and colonial rule over the Korean peninsula where multitudes of Koreans were conscripted as labor for Japan’s imperial war machine and forced into sexual servitude at brothels for the military.

The proportion of Japanese with a positive view of neighboring South Korea fell to a record low 20%, an annual poll conducted since 2013 and released this week showed, amid anger over a series of South Korean court rulings ordering Japanese companies to pay compensation in colonial-era forced labor cases.