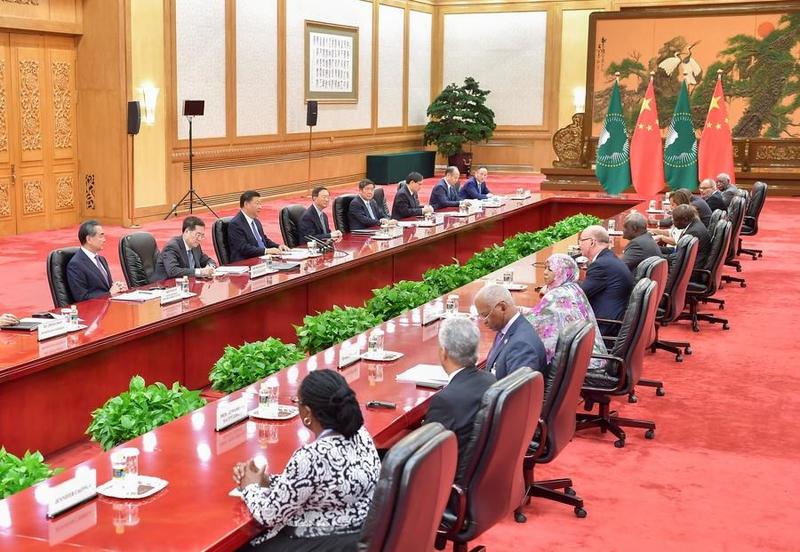 BEIJING - Chinese President Xi Jinping on Wednesday met with African leaders after the 2018 Beijing Summit of the Forum on China-Africa Cooperation (FOCAC) which concluded Tuesday.

During a meeting with Moussa Faki Mahamat, chairperson of the African Union (AU) Commission, Xi expressed thanks to the chairperson for making important contributions to the successful hosting of the FOCAC Beijing Summit.

Noting that the AU is a flag guiding Africa's unity and self-strengthening, Xi said China consistently supports the role of the AU in the process of Africa integration and supports the AU in playing a more constructive role in the development of China-Africa relations and FOCAC affairs.

In recent years, China and the AU have reaped fruitful results in cooperation and conducted stronger communication and coordination in international affairs, Xi said.

China is ready to use the success of the Beijing summit as an opportunity to enhance alignment of strategies with the AU, jointly build the Belt and Road, deepen pragmatic cooperation, expand security cooperation and promote capability building, Xi said.

China firmly supports the AU and African countries in solving African problems in African ways, supports boosting capabilities in peacekeeping and maintaining stability, and supports the AU in playing a greater role of guidance and coordination in transnational and trans-regional cooperation, Xi said.

With the success of the Beijing summit and under the leadership of President Xi, Africa-China relations have found out the right direction and chosen the right path, Faki said.

Noting that the eight major initiatives proposed by President Xi highly match the Belt and Road Initiative, the AU chairperson said the eight initiatives will help the AU realize its 2063 Agenda and will surely promote peace and development in Africa.

African people are thirsty for happiness, which will be impossible without peace and development, said Faki.

The AU is ready to work with China and African members of the FOCAC to implement the consensus reached during the Beijing summit and bring benefits to African and Chinese, Faki said. 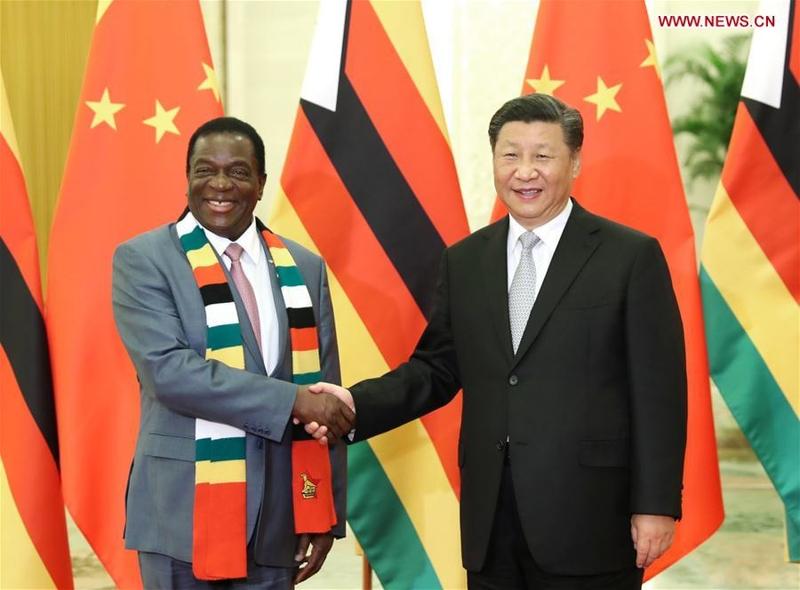 While meeting with Zimbabwean President Emmerson Mnangagwa, the Chinese leader thanked him and the Zimbabwean government for making important contributions to the success of the FOCAC Beijing Summit.

Xi appreciated that President Mnangagwa had expressed the willingness to jointly develop the Belt and Road with China at the summit.

China will continue to support Zimbabwe's efforts to develop and reinvigorate the economy and allow it to improve by itself, he said.

The two countries should actively explore new models and areas to push for sustainable development of their economic and trade cooperation, the president said.

Mnangagwa said Zimbabwe and China have a unique friendship and that the Zimbabwean government and people appreciate China's precious assistance to help improve the country's economy and its people's livelihood for years.

Zimbabwe fully supports the cooperation measures proposed by China under the Belt and Road Initiative and the FOCAC framework, and expects to strengthen cooperation with China in investment, financing, infrastructure, agriculture, telecommunications, electricity, among other areas, Mnangagwa said. 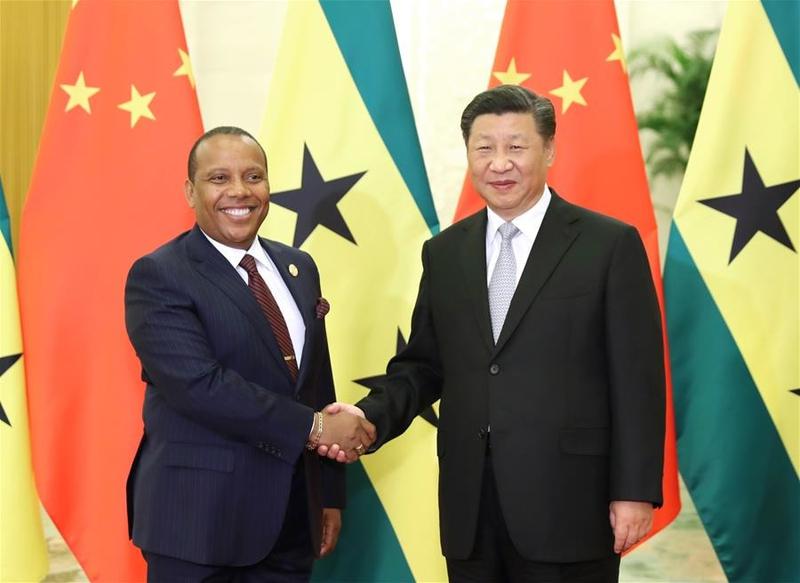 "We welcome Sao Tome and Principe back to the China-Africa big family of friendly cooperation," Xi said.

Since China and Sao Tome and Principe resumed diplomatic relations in December 2016, bilateral cooperation in various areas has brought fruitful results, which demonstrated that the resumption of diplomatic relations was completely in line with the fundamental interests of the two peoples, he said.

"We believe bilateral ties will continue to make new progress on the basis of the one-China principle, benefiting people of both sides.”

Congratulating China for the success of the summit, Trovoada said Sao Tome and Principe hopes to work with all sides to make contributions to building an even stronger China-Africa community with a shared future.

Sao Tome and Principe thinks highly of the new initiatives on China-Africa cooperation proposed by President Xi, and appreciates that China has always stood together with Africa, Trovoada said.

It's been proved that Sao Tome and Principe's decision to resume diplomatic relations with China was exactly correct, Trovoada said.

Sao Tome and Principe firmly upholds the one-China principle, and is committed to establishing close ties with China, Trovoada said, adding that the country is willing to deepen win-win cooperation with China in economic and social fields, which will help Sao Tome and Principe's development.

President of the Republic of the Congo Denis Sassou Nguesso

President Xi and Republic of the Congo Denis Sassou Nguesso agreed to promote the bilateral ties with greater and more substantial measures.

Xi said the bilateral relationship is at its best in history, adding that China regards the Republic of the Congo as an all-weather friend and is willing to consolidate and deepen political mutual trust, expand high-level and all-level exchanges, boost experience sharing in governance, and strengthen communication on policies, concepts and strategies.

The Chinese leader called for enhanced coordination and collaboration on key global issues and make the global governance system and the international order more just and equitable.

China will unswervingly enhance mutually beneficial cooperation and welcomes the Republic of the Congo to join the Belt and Road construction, said Xi.

Sassou Nguesso said his country fully supports the Beijing Declaration and the FOCAC Beijing Action Plan adopted at the summit.

The Republic of the Congo is grateful for China's long-term support and highly appreciates the Belt and Road Initiative and the concept of a community with a shared future for humanity as well as the eight initiatives proposed by President Xi, said Sassou Nguesso. 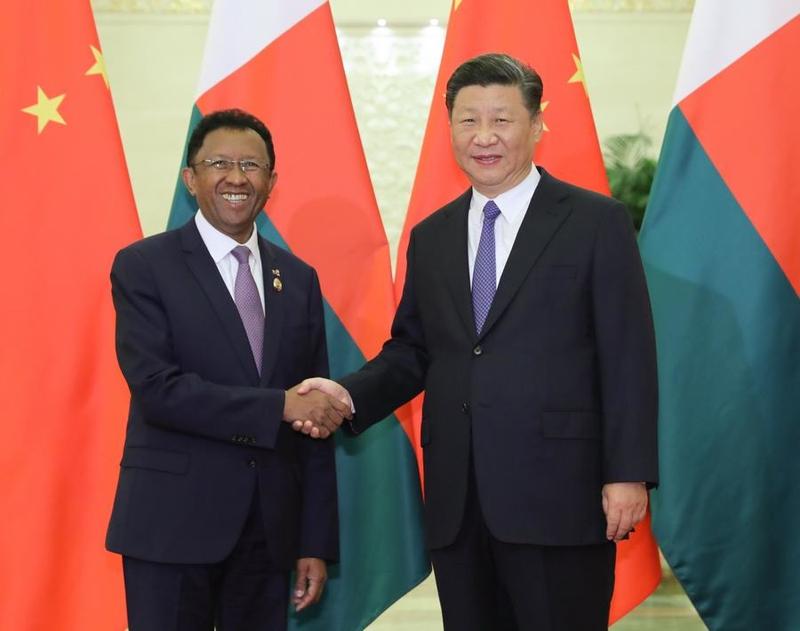 During his meeting with Madagascar's President Hery Rajaonarimampianina, Xi said China-Madagascar relations are at their best in history, showing strong vitality with broad prospects.

Xi said China-Madagascar relations are at their best in history, showing strong vitality with broad prospects

China supports Madagascar in its efforts to maintain stability, grow the economy and follow a development path suited to its national conditions, Xi said, pledging support to Madagascar in achieving economically sustainable self-development.

Xi spoke of the need for China and Madagascar to strengthen communication and coordination in major international and regional issues such as climate change, the United Nations 2030 Agenda for Sustainable Development and the peace and security issues in Africa to safeguard the common interests of the two countries and those of the developing countries.

For his part, Rajaonarimampianina said Madagascar fully supports Xi's important proposal for building an even stronger China-Africa community with a shared future and the various measures that follow.

He said China supports Africa with real actions, which is very important to Africa.

Madagascar stands ready to take an active part in jointly building the Belt and Road and is willing to be an important gateway for China's exchanges and cooperation with Africa, he added.

Xi expressed thanks to Vaz for his contribution to the success of the summit and spoke highly of his support for strengthening China-Africa cooperation and jointly building the Belt and Road.

Guinea-Bissau is willing to use China's experience in governance and poverty reduction as a reference, and seize the opportunity of the summit to actively participate in the Belt and Road construction and expand cooperation with China. 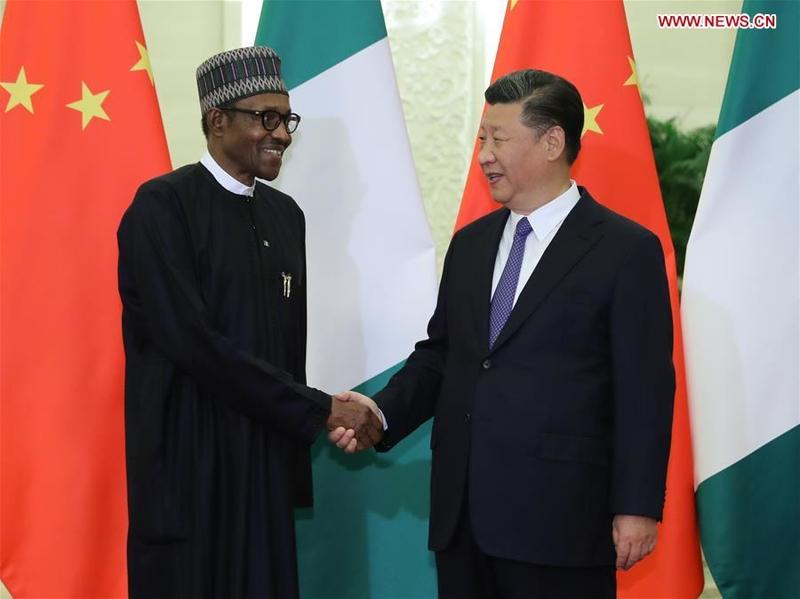 While meeting with Nigerian President Muhammadu Buhari, Xi noted that Nigeria is a major African country and an essential partner to China in Africa.

Xi said he attaches great importance to the development of China-Nigeria relations, which have reached a stage of growth unmatched in history.

China appreciates the Nigerian government's commitment to the one-China policy and is ready to continue its mutual understanding and support with the Nigerian side on issues involving each other's core interests and major concerns, Xi said.

Nigeria is welcome to participate in the Belt and Road construction. China is willing to deepen cooperation with Nigeria in fields such as infrastructure, agriculture and production capacity, enhance people-to-people and cultural exchanges, and support Nigeria's economic and social development so that the bilateral cooperation can become a model for China-Africa cooperation, Xi said.

Buhari congratulated China on the success of the FOCAC Beijing summit.

The FOCAC has become an important platform for creating a brighter future for 2.6 billion African and Chinese. Nigeria will work with other FOCAC members to implement the outcomes of the summit, he said.

Buhari expressed gratitude to China for its concrete assistance to Nigeria's economic and social development.

With China's help, Nigeria obtained a light rail, the first of its kind in West Africa, which fully reflected China's technology, quality and speed, he said. 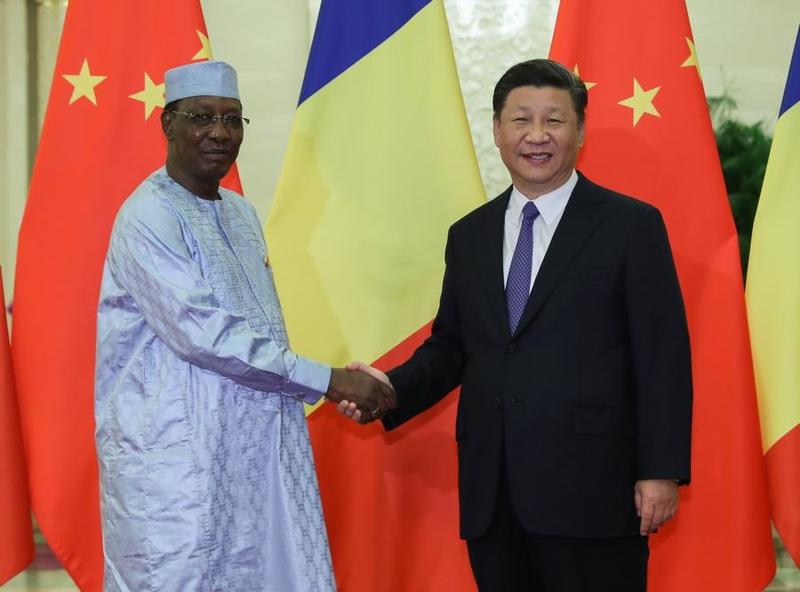 During a meeting with Chadian President Idriss Deby Itno, Xi stressed the complete success of the just-concluded summit and thanked Deby for his important contribution to that success.

Recalling his previous meetings with Chadian president and many important consensuses they have reached, Xi called on both sides to build on the achievements and seize the opportunity of implementing the consensuses of the summit to expand cooperation areas for more outcomes.

The Chadian president said the success of the Beijing summit reflected Africa's trust in President Xi and China, as well as their expectations for and confidence in the Africa-China partnership

Both sides should maintain the momentum of high-level exchanges, strengthen exchanges in various areas at all levels, and continue to support each other on issues involving their core interests, said Xi.

Xi said China stands ready to work with Chad in promoting the implementation of infrastructure projects, expand cooperation on energy exploration and exploitation, and help Chad advance its industrialization.

Deby extended congratulations on the success of the Beijing summit, saying it was impressive to see so many African leaders attending a summit and exchanging ideas on working together towards a China-Africa community with a shared future in a fraternal and friendly way. He said it reflected Africa's trust in President Xi and China, as well as their expectations for and confidence in the Africa-China partnership.

The eight major initiatives proposed by Xi are forward-looking and adhere to the principle of sincerity, real results, affinity, and good faith, Deby said.

Highlighting the tangible outcomes from Chad-China cooperation, he also expressed gratitude for the help from China in the development of Chad over the years.

Chad hopes to learn from China's development experience and welcomes Chinese investment and technology, so as to continue deepening cooperation between the two countries in various areas, said Deby.

During his meeting with Tunisian Prime Minister Youssef Chahed, Xi said the friendship between China and Tunisia will remain unchanged no matter how the situation changes, and that the China-Tunisia relationship has maintained healthy and stable development.

China will, as always, support Tunisia in exploring a development path suited to its national conditions and conforming to the trend of the times, and support Tunisia's efforts in maintaining stability and promoting economic and social development, Xi said.

Xi also urged the two sides to increase interaction and strengthen exchanges of experience in governance.

Chahed said the eight major initiatives proposed at the summit would elevate Africa-China relations to a new level.

Tunisia applauds the concept of a China-Africa community with a shared future and the Belt and Road Initiative proposed by President Xi, and hopes to learn from China's success, strengthen cooperation in fields such as the economy and trade as well as tourism, and welcomes Chinese companies to invest in Tunisia, Chahed said.