US ready to target other countries for supporting Maduro 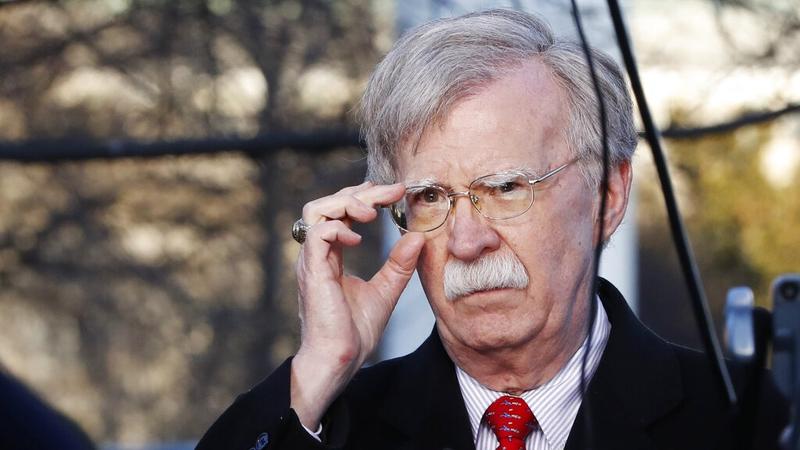 In this March 5, 2019 file photo, US national security adviser John Bolton adjusts his glasses before an interview at the White House in Washington. (JACQUELYN MARTIN / AP)

LIMA —  US national security adviser John Bolton on Tuesday said Washington was ready to impose sanctions on any international company doing business with Venezuelan President Nicolas Maduro, a sharp escalation of US pressure on the leftist leader.

Bolton, addressing a summit on Venezuela in the Peruvian capital Lima, emphasized that tougher international action was needed to speed up a transition of power in the country, where more than four million Venezuelans have fled economic collapse.

“We are sending a signal to third parties that want to do business with the Maduro regime: proceed with extreme caution,” Bolton said.

We are sending a signal to third parties that want to do business with the Maduro regime: proceed with extreme caution

ALSO READ: US continues to ratchet up pressure on Maduro govt

His speech came a day after US President Donald Trump signed an executive order that freezes the assets of the Venezuelan government and bans any transactions with it.

Bolton, one of the Trump administration’s most influential hawks on Venezuela, told reporters the move forces companies around the world to choose whether to risk access to the United States and its financial system for business with Maduro.

Asked by a reporter how Venezuela would respond to the executive order, Venezuelan Foreign Minister Jorge Arreaza said: “I’m going to paraphrase Donald Trump ... All options are on the table.”

The 15-member UN Security Council will be unable to take any action as the United States is one of the body’s five veto powers, along with Russia, China, Britain and France.

It was the first US asset freeze against an entire government in the Western Hemisphere in more than 30 years. But it was also a reminder that successive rounds of US sanctions have so far failed to peel away the crucial support of Venezuela’s military for Maduro, who took office in 2013 following the death of his political mentor President Hugo Chavez.

Continuing the state controls started under Chavez, Maduro has overseen one of the worst economic collapses in recent world history, leaving his nation of 30 million people with severe shortages of food and medicine despite sitting on the world’s largest oil reserves.

In private, Bolton had told Peruvian officials the measure would have the effect of about tripling current sanctions related to Venezuela, a Peruvian government source said, speaking on condition of anonymity.

The executive order stopped short, however, of a full US trade embargo of the kind imposed on Cuba, experts said, by excluding Venezuela’s still sizeable private sector.

The order maintains some exemptions for companies that do business with state oil company PDVSA, and licenses published on Tuesday reiterated that companies like Chevron and Halliburton can continue to do business with PDVSA in Venezuela through Oct. 25.

Some experts said the move could lead to pushback from other countries, and would require a lot of time and money to prove foreign companies are undermining sanctions.

“How much is the US government willing to spend in diplomatic capital in economic costs in the United States, in order to further its Venezuela policy? said David Murray of the Washington-based firm Financial Integrity Network, an expert on sanctions compliance.

Most Western and Latin American democracies accuse Maduro of rigging elections last year and are calling for him to step down so the country can hold a fresh presidential ballot.

The summit, organized by Peru, a regional leader on demanding democratic reforms in Venezuela, had aimed to build support for new elections with Maduro’s allies.

Russia’s foreign ministry said on Tuesday that Washington’s asset freeze was illegal and amounted to “economic terror”, the RIA news agency reported. Bolton warned Russia against doubling down on its support for Caracas.

READ MORE: US imposes sanctions on son of Venezuela's Maduro

Bolton said Washington had taken steps to ensure the sanctions did not hurt Guaido and his allies, nor prevent access to humanitarian goods.

The plan has a goal of reversing Venezuela’s decline in oil production within a year, and calls for a long-term deal with the International Monetary Fund, Ross said.