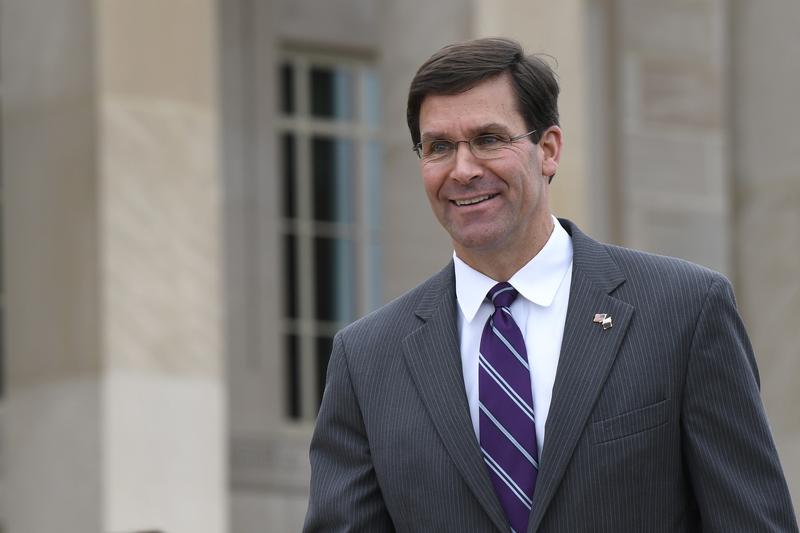 WASHINGTON — President Donald Trump on Monday asked the Senate to confirm Mark Esper as the successor to former Defense Secretary Jim Mattis, whose resignation last December opened an unprecedented period of senior-level instability at the Pentagon.

The moment the nomination was received by the Senate on Monday afternoon, Esper was required to step out of his role as acting defense secretary — a job he has held since June — until he is confirmed as the permanent secretary. He reverted to his previous position of Army secretary.

Filling in for Esper pending his confirmation is Richard Spencer, who has been the civilian leader of the Navy since August 2017.

While my time in this role is anticipated to be brief, I am fully prepared and committed to serve as Acting Secretary of Defense, and I will provide continuity in the leadership of the department

Spencer's tenure as acting secretary is expected to be brief. Esper will have his Senate confirmation hearing on Tuesday and could be confirmed as early as Thursday. Spencer would then return to the Navy.

As soon as he took the handoff from Esper, Spencer sent a brief letter to all military and civilian personnel of the Defense Department.

"While my time in this role is anticipated to be brief, I am fully prepared and committed to serve as Acting Secretary of Defense, and I will provide continuity in the leadership of the department," Spencer said.

He said American allies and partners "can rest assured" that during this transition the Pentagon remains ready to meet its global commitments.

Spencer, a native of Connecticut, joined the Marine Corps after graduating from Rollins College in 1976. He served in the Marines until 1981 as an H-46 helicopter pilot, according to his official Navy biography.

He is a former Wall Street investment banker. For 10 years prior to becoming Navy secretary he was managing director of Fall Creek Management, a private investment firm.

Prior to the Trump administration, only twice before has the Defense Department been led by an acting secretary — most recently in 1989 — and never has it had more than one in a single year.

The lack of stable leadership atop the Pentagon has raised questions in Congress at a time of heightened tensions with Iran and continued US wars in Afghanistan and Syria.

Jonathan Hoffman, the chief Pentagon spokesman, said although Spencer may hold the acting secretary job only briefly, he has the full authority and responsibility of the secretary of defense. Hoffman said David Norquist will continue as the fill-in at deputy defense secretary, a role he has been performing since Mattis' departure.

If Esper is confirmed by the Senate this week, Norquist is expected to be nominated by Trump next week to be permanent deputy secretary.

Mattis, a retired Marine general, resigned after two years in the job after a series of policy disagreements with Trump, climaxing with Trump's since-rescinded decision to pull all US troops out of Syria. When Mattis left, Shanahan moved up from being deputy defense secretary, but Trump never nominated Shanahan for the top spot. Shanahan stepped down suddenly in June amid disclosures about past episodes of alleged domestic violence in his family.

There also is no Senate-confirmed deputy secretary of defense or civilian leader of the Air Force. The vice chairman of the Joint Chiefs of Staff, General Paul Selva, is scheduled to retire July 31, and his nominated successor, General John Hyten, has yet to be scheduled for a Senate confirmation hearing.

A military officer has accused Hyten of sexual misconduct. An investigation found insufficient evidence to charge Hyten, but some members of Congress have raised questions about that process.

It's unclear whether Hyten's nomination will proceed.

Esper, who has been the civilian leader of the Army since November 2017, has a wide range of experience with defense issues, including years on Capitol Hill. More recently he was a lobbyist for Raytheon Co, which does a lot of business with the Pentagon.

Esper's former work with Raytheon is likely to come up at his Senate Armed Services Committee hearing on Tuesday. Senator Elizabeth Warren, a candidate for the Democratic presidential nomination and a member of the committee, has raised questions about Esper's lobbying background.