By Chen ZImo in Hong Kong 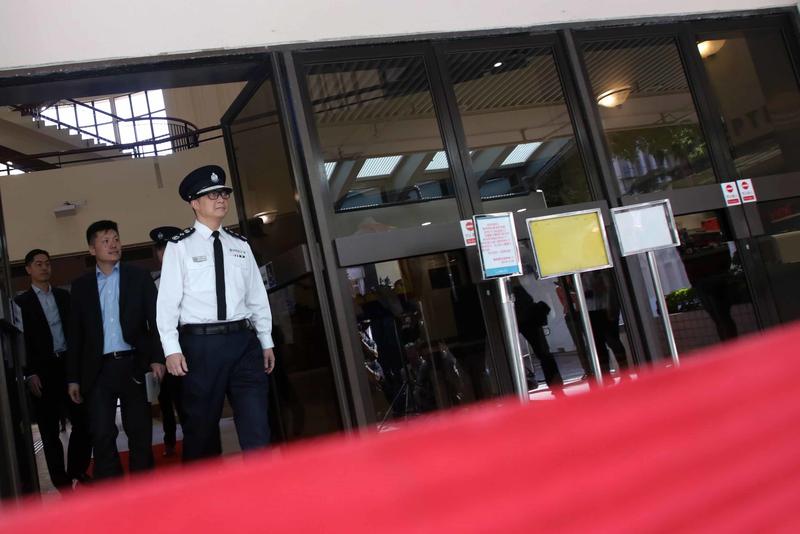 Police Commissioner Chris Tang Ping-keung urged protesters not to resort to violence or voter harassment, saying "these actions are against 7 million people of Hong Kong".

The police force’s promise not to arrest those under the age of 18 for now. Minors will be allowed to leave after police record their personal information

At a media briefing on Friday morning, Tang said police will deploy sufficient manpower on polling day to ensure public security and the order of polling stations. Officers will be on patrol near the stations to forestall attempts to disrupt the elections.

If there is any violence, the police force will deal with it immediately, without hesitation, he said.

The police have made different plans for potential emergencies, said Tang.

Barnabas Fung Wah, chairman of the Electoral Affairs Commission, announced on Tuesday that four polling stations near the major universities were relocated after a risk assessment.

Fung appealed to protesters not to affect the rights of other people when expressing their views and opinions.

Over 600 ordinary polling stations and 23 dedicated polling stations will be open for over 4.13 million electors listed on the 2019 Final Register to cast their votes. In balloting, 1,090 validly nominated candidates will compete for the 452 seats in the 18 districts.

Tang also reiterated the police's desire to peacefully resolve the standoff at Hong Kong Polytechnic University and called on the remaining 100 or so protesters to leave the campus.

He urged those who are still occupying the PolyU campus to come out and surrender to the police.

Tang reiterated the police force's promise not to arrest those under the age of 18 for now. Minors will be allowed to leave after police record their personal information.

Arrestees, as always, will be treated fairly, Tang added.

The campus is very dangerous at the moment, with a lot of explosives, including gasoline bombs, scattered about, Tang said.

"You don't want your family, friends, and people coming to visit you to worry about you," he told the resisters.

The PolyU campus has been occupied and used as a stronghold by radical protesters since Nov 15. Police sealed off the university on Sunday night and announced that all the occupiers on campus were participating in a riot, and asked them to leave the campus and surrender to police.

More than 1,000 people have left the campus peacefully. About 300 of them were younger than 18, according to the police.

It is believed that about 100 hardcore protesters are still on the campus.

Although the past week has been difficult and dangerous for the police, the officers have showcased their fearlessness, Tang said. Some officers have worked more than 30 hours straight. Some faced attacks of hundreds of gasoline bombs, bricks, and metal balls, he added.

Among the injured officers during the PolyU standoff was a police officer with the Police Public Relations Branch, who on Sunday was struck in the calf by an arrow shot by a rioter.