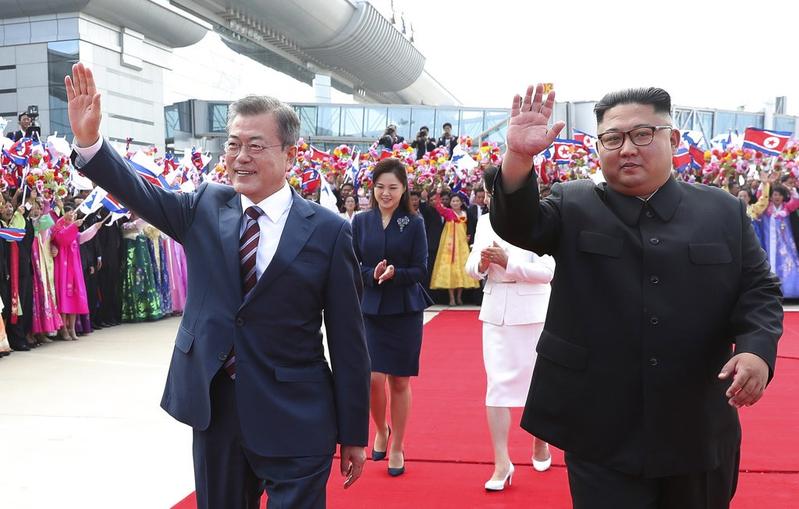 The talks started at 3:45 pm local time (0645 GMT) at the main building of the ruling Workers' Party of Korea (WPK) and concluded about two hours later.

Kim said in his introductory remarks that he felt he and Moon had become very close, and that the close personal relationship between them will help forge better bilateral relations and improve the mutual feelings between the DPRK and the United States.

The spring of Panmunjom became the fall of Pyongyang ... and now it's time to reap the results.

The DPRK leader said Moon had "ignited the embers" of the historic DPRK-US summit in Singapore in June, adding that it would surely bring stability to the region and produce more results.

Moon said that "the spring of Panmunjom became the fall of Pyongyang ... and now it's time to reap the results," referring to the first inter-Korea summit in Panmunjom in April.

The two leaders met in Panmunjom again in May and the Pyongyang summit is their third meeting this year.

He expressed appreciation for Kim's "bold determination to open a new era on the Korean Peninsula."

While signing the guest registry before the start of the talks, Moon wrote that "To peace and prosperity, the heart of our people is one."

During the talks, Moon was accompanied by his top national security advisor Chung Eui-yong and chief of the National Intelligence Service (NIS) Suh Hoon.

It marked the first time that the leaders of the two Koreas held a meeting at the WPK's main building, Moon's senior press secretary Yoon Young-chan told a press briefing at the press center in Seoul.

Moon and Kim are scheduled to have another face-to-face talk on Wednesday. If the talks go smoothly, they would hold a joint press conference to announce the dialogue results, Moon's chief of staff Im Jong-seok said Monday.

READ MORE: Moon says to have frank talks with Kim to build trust

Before leaving for Pyongyang, Moon said he planned to have a lot of frank talks with Kim during his DPRK visit in order to bring an "irreversible, permanent peace to the Korean Peninsula" and help restart the DPRK-US dialogue on the denuclearization of the Korean Peninsula.

The official Korean Central News Agency (KCNA) of the DPRK said the Pyongyang summit aimed to implement the Panmunjom Declaration issued after the first Moon-Kim summit.

The Pyongyang summit "will offer an important opportunity in further accelerating the development of inter-Korean relations that is making a new history," the KCNA said.

Remarkable progress has been made in the dialogue between the two Koreas since the beginning of the year, but challenges remain as the US and the DPRK find it not easy to narrow the gaps in negotiations over the peninsula's denuclearization. 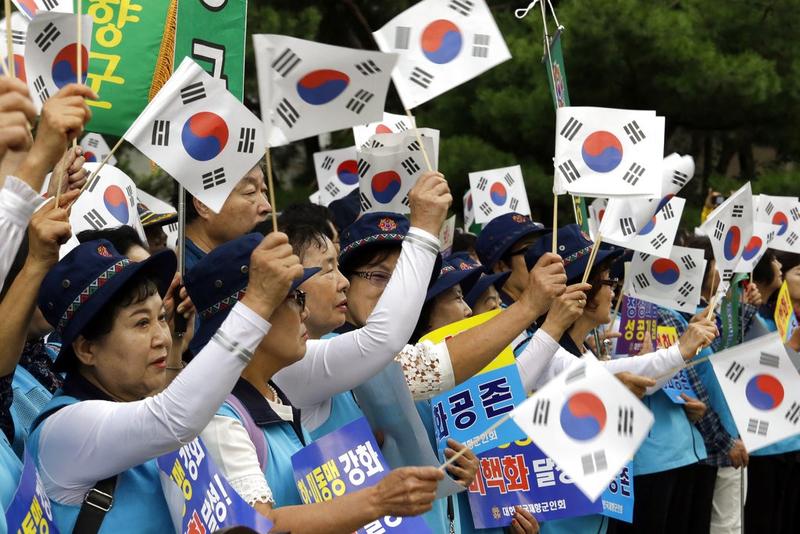 People in the Republic of Korea wave their national flags during a rally to wish for the successful inter-Korean summit, near the presidential Blue House in Seoul, Sept 18, 2018. The signs read: " Denuclearization." (AHN YOUNG-JOON / AP)

Moon's ongoing visit to Pyongyang, aimed at restoring stalled talks between the DPRK and the US, is the first by a ROK leader of state in 11 years.

Late ROK presidents Kim Dae-jung and Roh Moo-hyun traveled to Pyongyang for meetings with then DPRK leader Kim Jong-il, father of the current leader, in 2000 and 2007, respectively.

Moon's press secretary told the press briefing at the Seoul press center that the ROK president is scheduled to visit New York later this month for the United Nations General Assembly and meet US President Donald Trump. 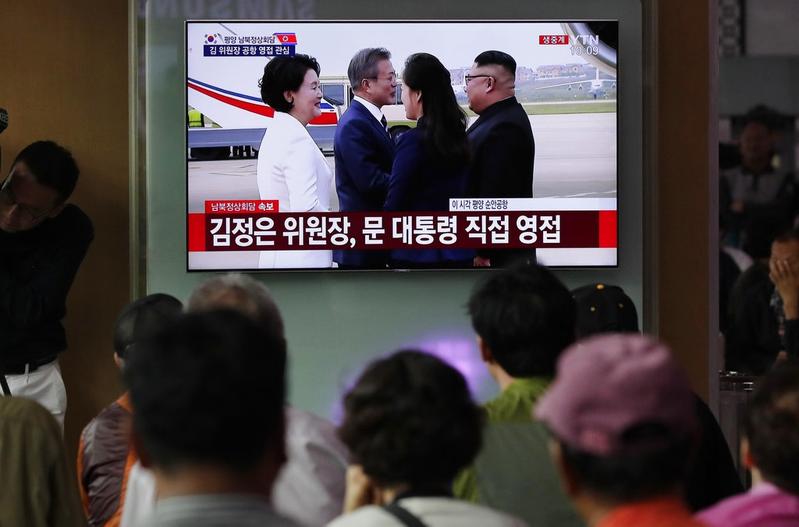 If the inter-Korea summit produces fruitful results, Moon will exchange views with Trump based on the results, the press secretary said.

On Monday, China said it hoped the positive outcomes of the summit, beginning Tuesday in Pyongyang, could further strengthen inter-Korean coordination

Moon and ROK first lady Kim Jung-sook arrived in Pyongyang at around 10 am local time (0100 GMT), and were greeted by Kim and his wife Ri Sol-ju at the Pyongyang International Airport with a grand welcoming ceremony.

The two leaders left the airport in one black sedan after inspecting the guards of honor and exchanging greetings with the cheering crowds at the airport.

The pair, escorted by a motorcade, smiled and waved to local residents while their car traveled past the Ryomyong Street in downtown Pyongyang.

The ROK presidential Blue House estimated the number of DPRK civilians lining the street to welcome Moon at about 100,000.

Moon and Kim were seen later to step out of the same convertible black sedan outside the Baekhwawon State Guest House, where Moon is staying during his Pyongyang trip.

After the talks, the two leaders will watch a mass gymnastics and artistic performance titled "The Glorious Country" in the evening.

They will resume talks on Wednesday morning and hopefully sign a peace treaty to end the military tensions on the peninsula.