Taliban suicide bombing kills 10 near US embassy in Kabul 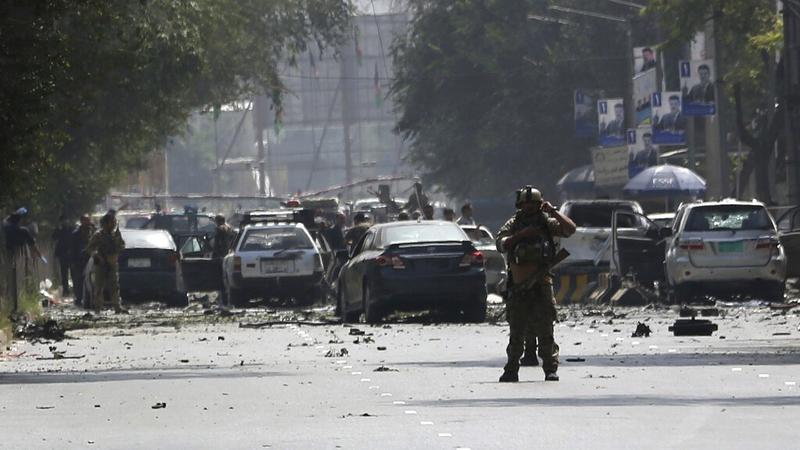 Afghan security personnel arrive at the site of car bomb explosion in Kabul, Afghanistan, Sept 5, 2019. A car bomb rocked the Afghan capital on Thursday and smoke rose from a part of eastern Kabul near a neighborhood housing the US Embassy, the NATO Resolute Support mission and other diplomatic missions. (RAHMAT GUL / AP)

KABUL, Afghanistan — A Taliban suicide car bomb rocked Kabul on Thursday, killing at least 10 civilians in a diplomatic area that also includes the US Embassy — the second such attack this week that underscored Afghan government warnings that a preliminary US-Taliban deal on ending America's longest war was moving dangerously quickly.

The Taliban said they targeted vehicles of "foreigners" as they tried to enter the heavily guarded Shashdarak area where Afghan national security authorities have offices. The NATO Resolute Support mission is nearby, and British soldiers were at the scene retrieving what appeared to be the remains of a NATO vehicle.

Neither the NATO mission nor the British high commission immediately commented on the bombing.

Footage widely shared on social media showed the suicide bomber's vehicle turning into the checkpoint and exploding — and a passer-by trying to sprint away just seconds before.

Once again, stunned civilians were the victims.

"I don't know who brought us to the hospital and how," said one of the wounded, Nezamuddin Khan, who was knocked unconscious and woke up in a local hospital.

The explosion follows a Taliban attack targeting a foreign compound late Monday that killed at least 16 people and wounded more than 100, almost all of them local civilians. An Associated Press reporter on the phone with the US Embassy when Thursday's blast occurred heard sirens begin blaring there. 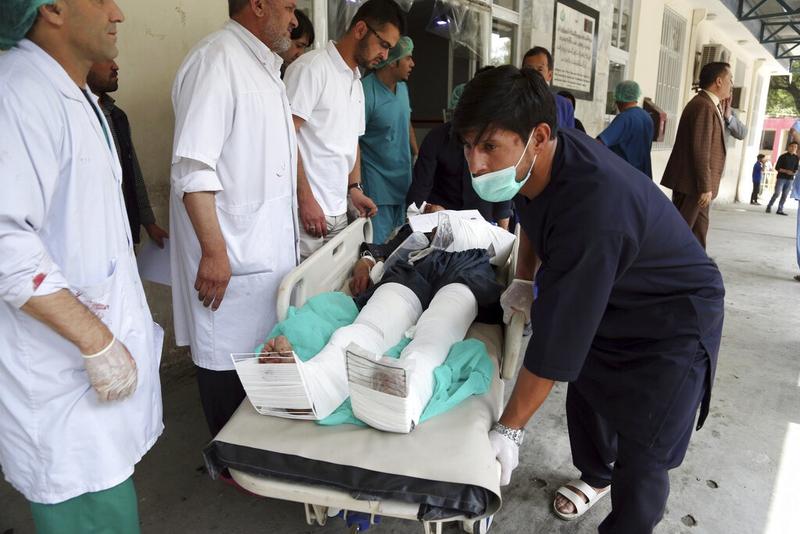 An injured man is carried into a hospital after a car bomb explosion in Kabul, Afghanistan, Sept 5, 2019.  (RAHMAT GUL / AP)

US envoy Zalmay Khalilzad has been in Kabul this week briefing the Afghan president and others on the US-Taliban deal to end nearly 18 years of fighting that he says only needs President Donald Trump's approval to become a reality.

But the Afghan government has raised serious concerns, including in new comments delivered Thursday as the latest attack occurred. The agreement was moving with "excessive speed," presidential adviser Waheed Omer told reporters, warning that difficult days were ahead.

"Afghans have been bitten by this snake before," Omer said, recalling past deals from which, like now, the Afghan government has been sidelined. "Where there is no feeling of ownership there is no safety," he said, though he emphasized that the government still sees the peace process as an opportunity.

The Taliban, at their strongest since their 2001 defeat by a US-led invasion, have refused to negotiate with the government, calling it a US puppet.

The Afghan government on Wednesday said it shares the concerns raised by several former US ambassadors to Afghanistan, who warned that a full US troop withdrawal that moves too quickly and without requiring the Taliban to meet certain conditions, such as reducing violence, could lead to "total civil war."

Khalilzad has said 5,000 US troops would withdraw from five bases in Afghanistan within 135 days of a final deal. Between 14,000 and 13,000 troops are currently in the country.

The Taliban want all of the approximately 20,000 US and NATO troops out of Afghanistan immediately, while the US seeks a withdrawal in phases that would depend on the Taliban meeting certain conditions such as a reduction in violence.

The US also seeks Taliban guarantees that they will not allow Afghanistan to become a haven from which extremist groups such as al-Qaida and the local affiliate of the Islamic State group can launch global attacks.

The deal is meant to be followed quickly by intra-Afghan talks that the US would like to see begin ahead of Afghanistan's presidential election on Sept. 28.

Afghan President Ashraf Ghani, who has been shown the US-Taliban deal but not allowed to keep a copy, has insisted that the election must not be delayed. He seeks a second term and what he calls a strong mandate to negotiate with the militant group on the country's political future. He has rejected talk of an interim government, an idea that has gained such traction in Kabul that many other presidential candidates have barely campaigned.

Ghani's adviser, Omer, acknowledged on Thursday the risks of holding another chaotic election after the presidential one in 2014 and last year's parliamentary vote. He said the election must happen on time but said a vote that is not transparent will "cause challenges."