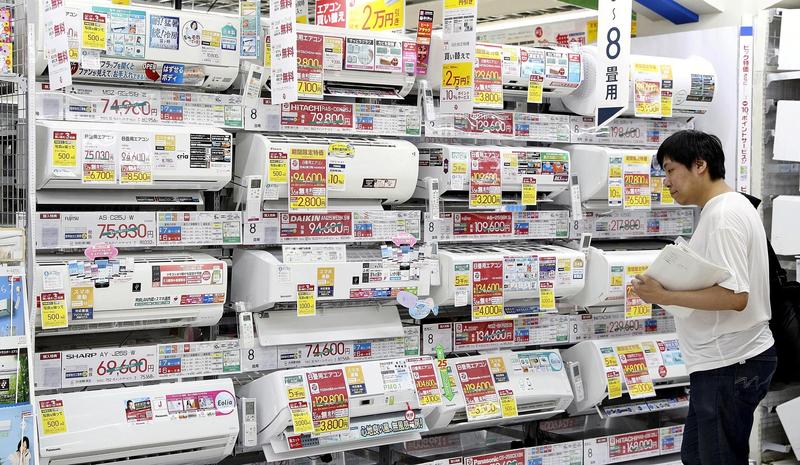 In this undated photo, air conditioners are displayed at a BicCamera Inc store at the west exit of Shinjuku Station in Tokyo, Japan. (PHOTO / THE JAPAN NEWS)

TOKYO — The Japanese archipelago has been suffering under extreme heat since the end of the rainy season in late July, which has led to a spike in deaths and people being taken to the hospital due to heatstroke.

This is believed to be partly because bodies that were accustomed to the cool rainy season have been unable to adapt to the sudden change in temperature.

A 28-year-old man dressed in a costume at the Hirakata Park amusement facility in Hirakata, Osaka prefecture, died of heatstroke while rehearsing a show on the evening of July 28, four days after the end of the rainy season in the Kinki region. Temperatures in the city reached 33.2 C that day.

There has been a nationwide increase in the number of people collapsing due to heatstroke.

Statistics from the Fire and Disaster Management Agency show that only one person died of heatstroke from July 1 to 23, but deaths have since risen rapidly, with 11 occurring in the five days from July 24

According to the Tokyo Fire Department, the number of people taken to the hospital per day in July in Tokyo, excluding Inagi and the islands, was in the single digits up to July 17.

However, the figure soared to more than 100 on July 29, the day the rainy season was declared over in the Kanto and Koshin regions. The numbers have continued to grow, with 333 people being taken to the hospital on Thursday and 341 people on Friday.

Fire and Disaster Management Agency statistics show that only one person died of heatstroke from July 1 to 23, but deaths have since risen rapidly, with 11 occurring in the five days from July 24.

There were 5,664 people taken to the hospital in the week ending July 28, triple the previous week’s figure. Of these, more than half were elderly people aged 65 or older.

No end this month

Why has the impact been so severe? According to the Japan Meteorological Agency (JMA), it may be because people’s bodies, which did not sweat much in cooler weather, have been unable to cope with the sudden rise in temperature.

A seasonal rain front lingered over Honshu from late June to mid-July. A high pressure system in the Sea of Okhotsk also brought cold winds from the north, resulting in cloudy, cool weather across the country.

The number of hours of sunshine per day in July was about 30 percent to 50 percent lower than the average year, resulting in a long, cool rainy season. However, temperatures have risen sharply since late July.

Central Tokyo has seen consecutive hot days with maximum temperatures of at least 30 C since July 24. Nearly 90 percent of observation points nationwide recorded 30 C or higher on Friday and Saturday. On Friday, 236 observation points, the largest number this year, recorded at least 35 C.

According to the JMA, the intense heat has been caused by a “two-story effect” of overlapping high pressure systems, which cause fair weather.

High temperatures are expected to continue until September.

Trying to beat the heat

Since the end of the rainy season, customers seeking air conditioners and fans have swarmed to outlets of BicCamera Inc, a major appliance retailer based in Tokyo.

Though the peak sales period was delayed by about half a month compared to normal years due to the long rainy season, the number of air conditioners sold nationwide from July 27 to Thursday was about double that of the same period last year, according to BicCamera.

A movement has been spreading among local governments to designate public facilities, shops and other places as “temporary rest areas” where people can get a break from the heat.

Chiyoda ward, Tokyo, has designated 35 locations aimed at people such as the joggers who run around the Imperial Palace and is encouraging people to take breaks. Similar initiatives have been started by local governments in places such as Oita prefecture and Kumagaya, Saitama prefecture.

Sports venues are also taking action. Water breaks of about three minutes were taken during boys’ and girls’ soccer games in the national high school athletic meet that ended in Okinawa prefecture on Thursday. The tournament’s awards ceremony was conducted with players sitting on roofed benches on the field.

For the first time this summer, the Japan High School Baseball Federation established a subsidy system to provide regional tournaments with up to ¥150,000 to prevent heatstroke. Funding has been used for things like purchasing fans for benches.

At the National High School Baseball Championship, which will begin Tuesday, plastic bottles filled with cold water will be available at all times near team benches for players to keep cool.