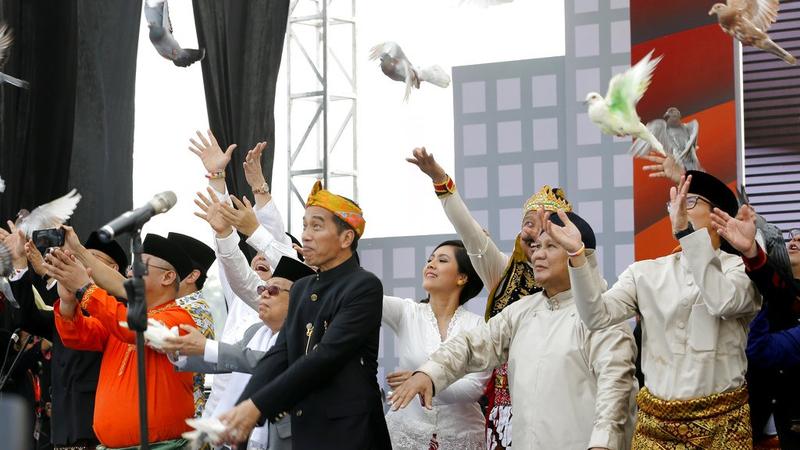 The election due in April pits incumbent Joko "Jokowi" Widodo against former general and ultranationalist Prabowo Subianto, who lost to Jokowi in 2014

The election due in April pits incumbent Joko "Jokowi" Widodo against former general and ultranationalist Prabowo Subianto, who lost to Jokowi in 2014.

Dressed in traditional clothing, the candidates and their running mates paraded through central Jakarta on Sunday and released doves at a ceremony after reading out a peaceful campaign declaration.

The 2014 presidential election was marred by dirty campaigning and wild internet rumors that Jokowi was a secret communist and of Chinese background, accusations often used in Indonesia to discredit or intimidate political opponents.

Jokowi, the first Indonesian president from outside the country's political and military elite, has picked conservative cleric Ma'ruf Amin as his running mate, aiming to neutralize criticism that he is insufficiently Muslim.

He has a big but not unassailable lead over Prabowo in polls and Indonesia's recent hosting of the Asian Games further burnished his image. 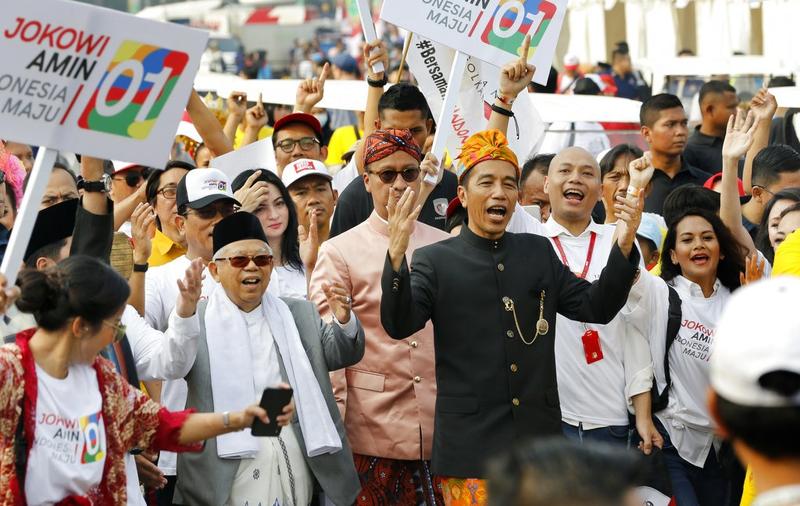 Indonesian President Joko Widodo, center right, walks and his running mate Ma'ruf Amin during a ceremony marking the kick off of the campaign period for next year's election in Jakarta, Indonesia, Sept 23, 2018. (TATAN SYUFLANA / AP)

With a population of more than 260 million, Muslim majority Indonesia is the world's third-largest democracy after India and the US. The country's image as a moderate Muslim nation has been undermined by flaring intolerance in the past several years, from the imprisonment of Jakarta's Christian governor, who was a Jokowi ally, for blasphemy to the canings of gay men in Aceh, a province that practices Shariah law.

Most of Jokowi's five-year term has been spent balancing the demands of his moderate base, powerful Islamic conservatives, a complicated parliamentary coalition and the military, which has never completely accepted its diminished role following the end of the Suharto dictatorship two decades ago.

Upgrading Indonesia's creaking infrastructure has been his signature policy but progress is uneven and many Indonesians still yearn for the strong-man type leadership represented by Suharto era figures such as Prabowo.