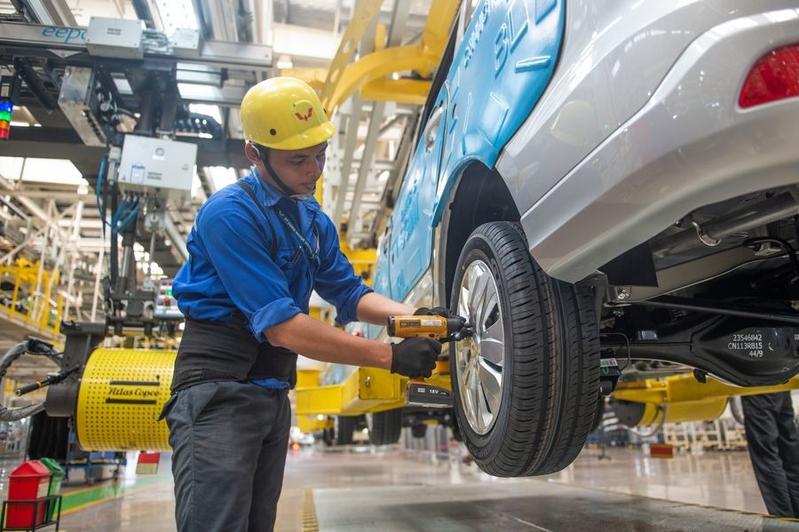 A worker assembles a vehicle at the assembly line of the SAIC-GM-Wuling Automobile (SGMW) plant in Cikarang, Indonesia, March 14, 2019. (DU YU / XINHUA)

NANNING — Pingxiang, a small city in south China's Guangxi Zhuang Autonomous Region bordering Vietnam, used to see villagers trading smallware such as kettles and cloths for a living in the early 1990s.

Now it has become a thriving city, with 1,300 trucks loaded with farm and seafood products bustling in and out of its Friendship Pass every day, and boasted nearly 20 transport routes extending to more than 20 cities of the Members of the Association of Southeast Asian Nations (ASEAN).

Themed "Building the Belt & Road, Realizing Our Vision for a Community of Shared Future," this year's expo will lift the all-round friendly cooperation between China, ASEAN and other countries participating in the Belt and Road Initiative (BRI) to a new level

The rise of the Pingxiang from obscurity to a booming border trade hub and a gateway for international trade between China and ASEAN countries is the fruit sown by deepened cooperation between the two sides.

New vitality is expected to be injected into the cross-border trade as the 16th China-ASEAN Expo commenced in Nanning Saturday, capital of Guangxi, aiming at further facilitating regional economic cooperation amid rising global trade protectionism.

Themed "Building the Belt & Road, Realizing Our Vision for a Community of Shared Future," this year's expo will lift the all-round friendly cooperation between China, ASEAN and other countries participating in the Belt and Road Initiative (BRI) to a new level.

With platforms such as the China International Import Expo and the China-ASEAN Expo injecting strong momentum into common development, China will cooperate with ASEAN in building economic and trade cooperation zones and the China-Indochina Peninsula Economic Corridor, said Chinese Vice Premier Han Zheng when addressing the opening ceremony of the expo.

Efforts will be made to boost the connectivity of infrastructures and deepen innovation cooperation in spheres such as e-commerce, digital trade and 5G internet, Han said.

With a shared goal to build Belt and Road jointly, Cambodian Deputy Prime Minister Hor Nam Hong noted that the BRI had a large influence on regional and global interconnectivity and economic opening-up, in terms of infrastructure building, trade and investment activities.

Meanwhile, cooperations between China and Laos under the framework of BRI have made great headway, said Lao Deputy Prime Minister Sonexay Siphandone, citing the China-Laos railway, the largest cooperation projects in Laos under BRI so far.

China has expanded its exports of electronic products, construction materials and machines, as well as technology in new energy, high-speed trains and agriculture to ASEAN member states.

In turn, the bloc's food, daily goods and bulk commodities have gained huge popularity among Chinese buyers in recent years.

Two-way investment between China and ASEAN countries has witnessed stellar growth to reach 230 billion US dollars in the first eight months of this year and investment stock soared 22 times in 15 years, revealing ASEAN's status as an increasingly significant investment destination of Chinese enterprises.

Feeding on the robust investment, regional economy has been drawing strengths to thrive.

A 700-million-dollar manufacturing plant of a Chinese automobile manufacturer SGMW, which broke ground in 2017 in Indonesia, created more than 3,000 jobs for local people.

Since the first China-ASEAN Expo, Liang Liyuan, chairman of Guangxi Xiangxiang International Logistics Co., Ltd., regarded the expo as a platform to expand customer base and a window to learn investment policies of ASEAN countries.

"In the early expos, it was more about showcasing goods, now we are seeing more and more exchanges on culture, policy and investment environment on the expo," Liang said.

According to the organizers, a total of 2,848 enterprises participated in this year's expo to showcase their products, up 2.4 percent from the event last year, including industry leaders, Fortune 500 companies and notable private businesses.

Against the backdrop of global economic volatility, the expo, along with other key initiatives are set to revitalize regional trade.

In August, China launched the Guangxi Pilot Free Trade Zone (FTZ), one of the three FTZs in border areas, to step up cooperation with the ASEAN region.

Pingxiang streamlined the regulatory approaches for clearance in May, allowing the procedures of declaration, tax payment and inspection to be finished before the imported cargos reach the customs.

"We no longer have to wait for the arrival of the cargos to declare," said Huang Xiang, customs affairs manager of Guangxi Huatai International Transportation Agency Co., Ltd., adding that it has greatly improved customs declaration efficiency.

Benefitting handsomely from the procedure upgrade as well, Liang said she will continue to up investment in Thailand and expand business to more Belt and Road countries.