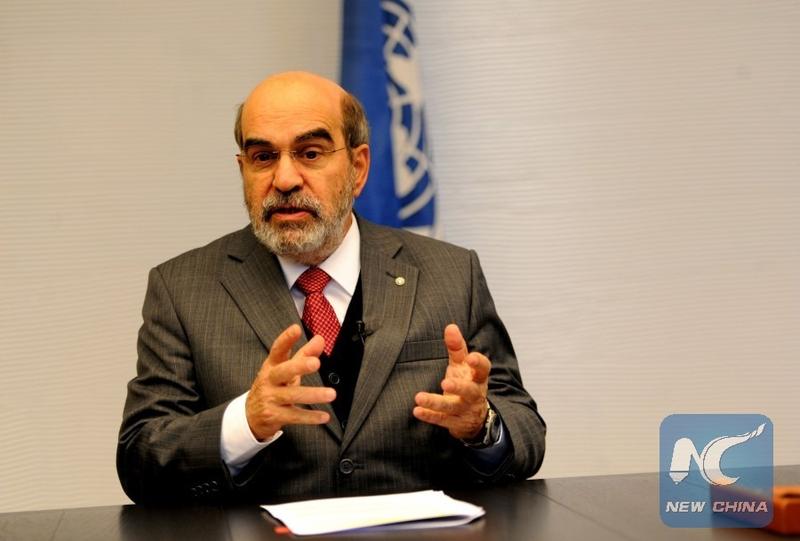 Director-General of the UN Food and Agricultural Organization (FAO) Jose Graziano da Silva speaks during an interview with Xinhua at headquarters of the FAO in Rome, Italy, Nov 20, 2013. (XU NIZHI / XINHUA)

The FAO chief made the remarks in an exclusive interview with Xinhua on Saturday on the sidelines of the 34th FAO Session of the Regional Conference for Asia and the Pacific held on the Denarau island near Fiji's third largest city of Nadi.

Director-general of the United Nations Food and Agriculture Organization

"China has in fact achieved remarkable results in terms of poverty alleviation," said Graziano da Silva, noting that 800 million people have been lifted out of poverty, demonstrating "strong leadership and dedication."

"Governments at all levels as well as institutions such as universities have all demonstrated dedication to reduce poverty, which led to fruitful collaboration and partnerships that were working towards a common goal," he said.

Graziano da Silva attributed China's achievements in eliminating poverty to the Chinese government's strong leadership and the mobilization of impressive levels of resources and innovation.

"Starting from agricultural reforms, followed by boosting the rural economy other than the farming sector, and through territorial and targeted approaches, poverty was efficiently identified and addressed," he said.

He was also impressed by the participation of all segments of the society in China, saying that "from government, to enterprises, NGOs, and ordinary people, all parts of the China society are making concerted efforts to alleviate poverty, to pursue inclusiveness development with no one left behind."

China has adopted a multi-sectoral approach to poverty reduction, which brings together agro-industry development, food security, social protection, health, education and ecological restoration. Among these, agro-industry development has been given priority, since it is key to lift the poor out of poverty in a sustainable manner. Same with education which can break the inter-generational poverty cycle, the FAO chief said.

Graziano da Silva also stressed the importance of innovation that China has used in its fight against poverty.

"China introduced a number of innovative solutions. One is using e-commerce to connect the farmers to the markets, which managed to increase farmers' income to a large extent," he said.

"China sets an example in the area of agricultural development and innovation, and has accumulated a wealth of experiences and technologies that can be shared with the rest of the developing world," he noted.

As for the role China can play in combating food insecurity and addressing climate change, the FAO chief said China's role in these fields is two-fold.

One is concerning what China can do domestically given the largest population it has, and the other is the role China can play in contributing to regional and international food security with its rapid economic development.

"China has the largest population and the largest farming sector as well. The total output of grain has been on the rise," he noted, adding that the country has set an example of successfully feeding around one fifth of the world's population with less than 10 percent of the world's arable land.

He emphasized that "while securing its own national food security, China has also been helping other developing countries through bilateral and multi-lateral South-South and triangular cooperation programs."

The FAO chief said despite the great progress made both in China and globally, agriculture development and food and nutrition security are confronted with multiple challenges such as climate change, which, if left unchecked, will reverse development gains made in the domain of food security over the last decades and even make further gains impossible.

"Globally, after steadily declining for over a decade, global hunger is on the rise again, affecting 815 million people in 2016, or 11 percent of the global population," he said.

"For China, maintaining and sustaining food and nutrition security of Chinese people, especially in the context of increasing population, rapid urbanization and rather limited natural resource per-capita, remains a strategic focus of the country," said Graziano da Silva.

"The (FAO) Country Programming for China (2016-2020) has made it first priority to foster sustainable and climate resilient agricultural development in the country," he said.

"China's development provides a valuable reference for other countries, in particularly the developing countries. It is believed that lessons learned and best practices in combating food insecurity and addressing climate change could be further shared with other developing countries under the framework of South-South cooperation and the Belt and Road initiative," he added.