The name of the Nazi concentraction camp Auschwitz-Birkenau is seen at the Holocaust Memorial Center, first central Europe's Holocaust museum, in Budapest on April 16, 2019 prior to the Holocaust memorial day. (ATTILA KISBENEDEK / AFP)

OSWIECIM, Poland — The American civil rights activist Rev. Jesse Jackson gathered Friday with survivors at the former Nazi death camp of Auschwitz-Birkenau to commemorate an often forgotten genocide — that of the Roma people.

In addition to the 6 million Jews killed in camps such as Auschwitz, the Nazis killed other minorities during World War II, including between 250,000 and 500,000 Roma and Sinti.

Since the term Gypsies is considered offensive, the groups are collectively usually referred to as Roma

Broadly speaking, Sinti are people who arrived from India and settled in western and central Europe many centuries ago, while Roma are centered largely in Eastern Europe. Since the term Gypsies is considered offensive, the groups are collectively usually referred to as Roma.

Other dignitaries set to attend Friday's observances are German deputy foreign minister, Michael Roth, who ahead of his visit lamented the lack of broad knowledge about the systematic murder of the Roma communities during World War II.

"For too long we have pushed the genocide of over 500,000 Sinti and Roma out of our historical memory and allowed the largest ethnic minority in Europe to be pushed to the margins of our society," Roth said recently. "We have the responsibility to ensure that the stories of the victims' suffering not be forgotten and that anti-Gypsy prejudices disappear from people's minds."

The commemorations in southern Poland, which was under German occupation during World War II, fall exactly 75 years after thousands of the last remaining prisoners in the so-called "Gypsy family camp" at Auschwitz-Birkenau were killed. 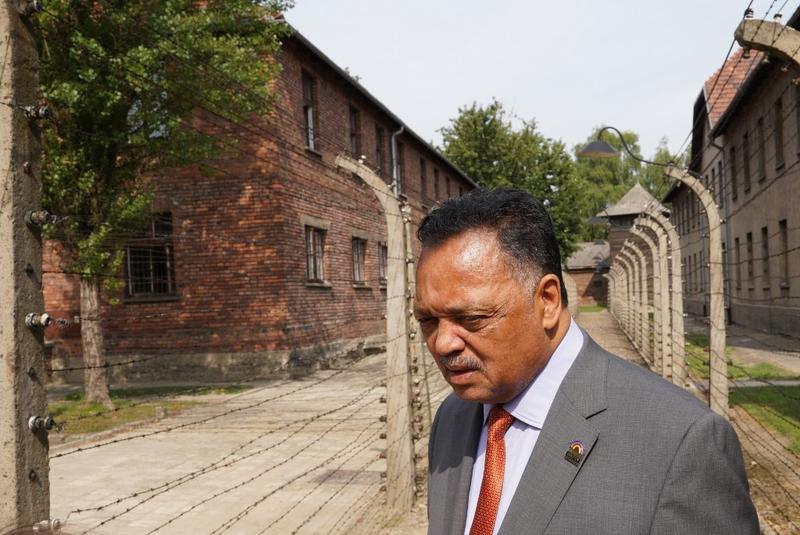 US civil rights activist Jesse Jackson walks between barbed wire fences as he visits the memorial site of the former Auschwitz-Birkenau German Nazi Death Camp, commemorating the 75th anniversary of the last Nazi killings of Sinti and Roma at the camp in Oswiecim, on August 2, 2019, the Roma Holocaust Remembrance Day. (ALIK KEPLICZ / AFP)

In a statement Friday, US Secretary of State Mike Pompeo called "on all governments to take steps to combat intolerance against the Roma and to enable their full participation in civic and economic life."

Organizers said that some 20 survivors, most of them Roma and Sinti but also some of them Jewish, were joining Friday's commemorations, which have been organized by the Central Council of German Sinti and Roma and the Roma Association in Poland in cooperation with the Auschwitz-Birkenau State Museum.

During the war, members of the Roma community faced deportation, sterilization, mass shootings in Soviet-occupied territories as well as the gas chambers. Many perished from starvation and disease.

Despite their immense suffering, it took decades for them to achieve even small measures of recognition and justice.

It was only in 1982 that West German Chancellor Helmut Schmidt publicly declared that Sinti and Roma "were persecuted for reasons of race" and that "these crimes constituted an act of genocide."

And this year ahead of International Roma Day on April 8, a bipartisan resolution was introduced in the US Congress that said "Roma enrich the fabric of our nation" and that they have been "part of every wave of European migration to the United States since the colonial period, tying our country to Europe and building the transatlantic bond."

In a statement Friday, US Secretary of State Mike Pompeo called "on all governments to take steps to combat intolerance against the Roma and to enable their full participation in civic and economic life."

Recently, Pope Francis has highlighted the discrimination the Roma still face today, even in Rome.

This week, some of Europe's top human rights leaders also reflected on the genocide. 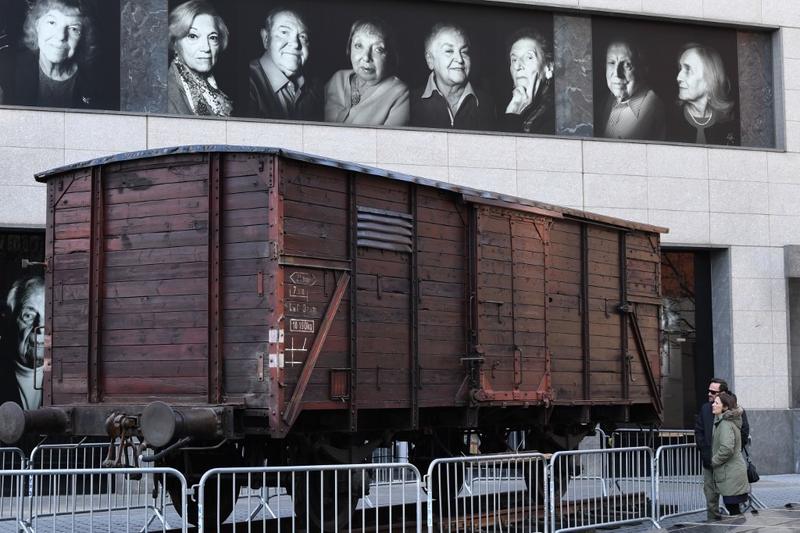 Portraits of Holocaust survivors are displayed on April 2, 2019 at the Museum of Jewish Heritage, as a vintage German train car, like those used to transport people to Auschwitz and other Nazi death camps, is seen in front of the building in New York. (TIMOTHY A. CLARY / AFP)

"The horrors of the Roma Holocaust are an undeniable part of our history, but for a long time Europe has turned a blind eye on to what had happened," said Thorbjorn Jagland, the secretary general of the Council of Europe, the continent's top human rights body. "We have the duty to end the silence that has lasted for decades."