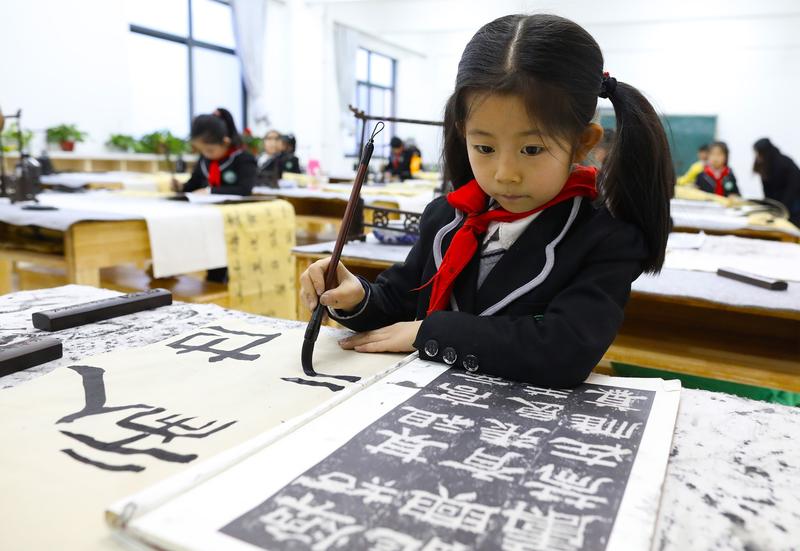 A student at Beijing No 2 Experimental Primary School in Yan’an practices calligraphy. Chinese art organizations should support the overseas Chinese so they can serve as a force in promoting traditional Chinese art and culture to the world, a renowned artist suggested. (PHOTO BY ZHU XINGXIN / CHINA DAILY)

HONG KONG - Chinese art organizations should support the overseas Chinese so they can serve as a force in promoting traditional Chinese art and culture to the world, a renowned artist and national political adviser suggested.

Dong Xiyuan, a member of the National Committee of the Chinese People's Political Consultative Conference, the country’s top political advisory body, made the suggestions during the annual session of the body, which opened in Beijing on Sunday.

The courses will provide overseas Chinese communities opportunities to learn traditional Chinese art, said Dong. Together with other artistic activities such as touring exhibitions and lectures, the programs will set a stage for the Chinese diaspora to communicate with one another about this shared interest, Dong added.

Dong considered it necessary to enhance communication on Chinese traditional art between these countries and involve overseas Chinese in promoting culture.

The overseas Chinese could serve as “cultural ambassadors”, said Dong. “Each of them could be the inheritor and disseminator of Chinese culture,” he said.

Dong spoke of his own experience through participation in various exchange activities overseas. He realized there was a strong demand among overseas Chinese to learn about and appreciate traditional Chinese art.

One of the exchange programs Dong took part in was a 10-day Belt and Road art and cultural exchange journey to Myanmar in November 2018. Dong and several other well-known Chinese artists were invited to create artworks and hold exhibitions with local artists in Myanmar.

The journey, jointly organized by China Daily and the Chinese Culture and Art Association, aimed to promote people-to-people understanding through interactions between artists from both countries.

He also suggested that Chinese art colleges should enroll more overseas Chinese students into Chinese painting and calligraphy courses. They should also provide them with awards and grants to encourage them to learn traditional Chinese art. Young people could be bridges for cultural communication between China and foreign countries.