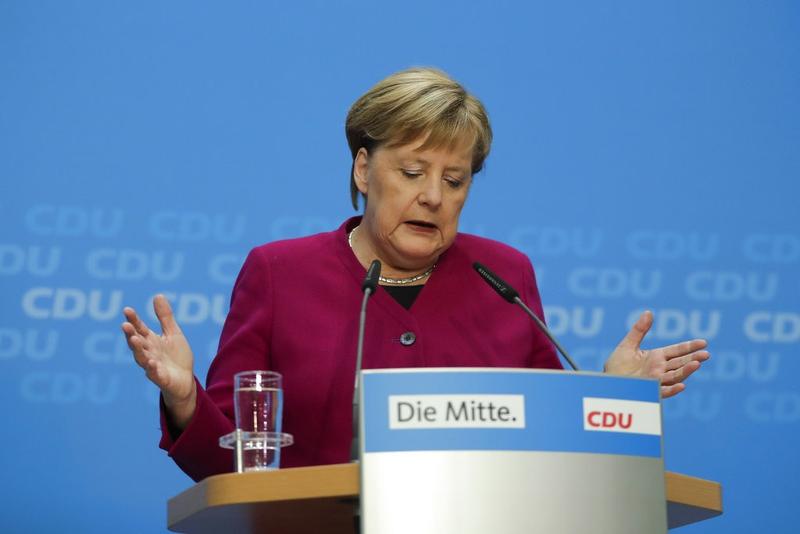 German Chancellor and Christian Democratic Party's chairwoman Angela Merkel addresses the media during a news conference after a party's leaders meeting at the headquarters the in Berlin, Germany, Oct 29, 2018. (MARKUS SCHREIBER / AP)

BERLIN — Germany's Angela Merkel announced Monday that she will step down as head of her conservative party in December after 18 years and won't seek a fifth term as chancellor in 2021, launching a leadership transition in Europe's biggest economy.

Merkel has led her conservative Christian Democratic Union since 2000 and Germany since 2005. She put Germany — and Europe — on track toward a new political era after voters punished Germany's governing parties in a state election Sunday, the latest in a string of woes to hit her fourth-term federal administration.

Merkel currently governs Germany in a "grand coalition" of what traditionally have been the country's biggest parties — the CDU, Bavaria's conservative Christian Social Union, and the center-left Social Democrats. Her current coalition took office only in March, after six months of tortuous negotiations, but has become notorious for its squabbling.

This fourth term is my final term as chancellor. I will not run as candidate for chancellor in the 2021 election, and will not seek re-election to the German parliament. And, just for the record, I will not aim for any other political office

The 64-year-old chancellor's personal popularity remains solid but she appeared keen to launch an orderly transition period amid signs that her authority is eroding. Merkel will now concentrate her energy on keeping her government going until 2021, something that still remains uncertain.

Merkel told reporters in Berlin that she has led the CDU with "passion and dedication" but added "today it is time to start a new chapter."

That will start with her handing off the party leadership to a successor at a party congress in December.

"This fourth term is my final term as chancellor," Merkel added. "I will not run as candidate for chancellor in the 2021 election, and will not seek re-election to the German parliament. And, just for the record, I will not aim for any other political office."

It had been widely assumed this would be Merkel's final term in office, but the comments were the chancellor's first public confirmation of that.

For years, Merkel has insisted that the chancellor should also be party leader. But she said Monday that she had decided splitting the two jobs is "justifiable" since she didn't plan to seek a fifth term as chancellor.

"With this decision, I am trying to contribute to allowing the government to concentrate its strength, finally, on governing well — and people rightly demand that," Merkel said.

At the same time, she said the CDU will be able "to prepare for the time after me."

She said she had been mulling her decision for months. Merkel's one-time mentor, Helmut Kohl, did seek a fifth term in 1998 and lost power after 16 years.

There is precedent for the chancellor not leading his or her party.

Merkel's predecessor, Gerhard Schroeder, stepped down as leader of his Social Democrats in 2004 as his government struggled, but remained chancellor until he narrowly lost an election 18 months later. Helmut Schmidt, West Germany's chancellor from 1974 to 1982, never led the Social Democrats.

Two prominent candidates immediately threw their hats in the ring for the CDU leadership. Annegret Kramp-Karrenbauer, who gave up her job as a state governor earlier this year to become the party's general secretary, is viewed as an ally of Merkel and largely backs her centrist approach.

And Health Minister Jens Spahn, an ambitious conservative who has talked tough on migration and has criticized Merkel, stands for a more right-wing candidate.

Merkel said she wouldn't interfere in the choice of her successor.

"Historically, that has always gone wrong and I won't participate in trying to influence discussions on my successor," she said. "I see this as an opening, a phase of opportunities."

Merkel has dragged the CDU to the political center in her years as leader, dropping military conscription, introducing benefits encouraging fathers to look after their young children and abruptly accelerating the shutdown of Germany's nuclear power plants following Japan's Fukushima disaster in 2011.

She swung her conservatives behind bailouts for Greece and other struggling eurozone nations, striking a balance between calls for a strict approach at home and more generosity abroad.

In one of her most debated moves, Merkel allowed large numbers of asylum-seekers into Germany in 2015, many of them fleeing the fighting in Syria, declaring that "we will manage it," before gradually pivoting to a more restrictive approach to migration. That decision has led to lasting tensions in her conservative Union bloc, particularly with Bavaria's CSU, and helped the far-right anti-immigrant Alternative for Germany party gain support.

At the other end of the spectrum, the traditionally left-leaning Greens have also gained support.

Sunday's election in the central state of Hesse saw both the CDU and the Social Democrats lose significant ground amid gains for both the Greens and the Alternative for Germany party. Merkel's party managed an unimpressive win in Hesse, narrowly salvaging a majority for its regional governing coalition with the Greens in the state.

The debacle followed a battering in a state election in Bavaria two weeks ago for the CSU and the Social Democrats.