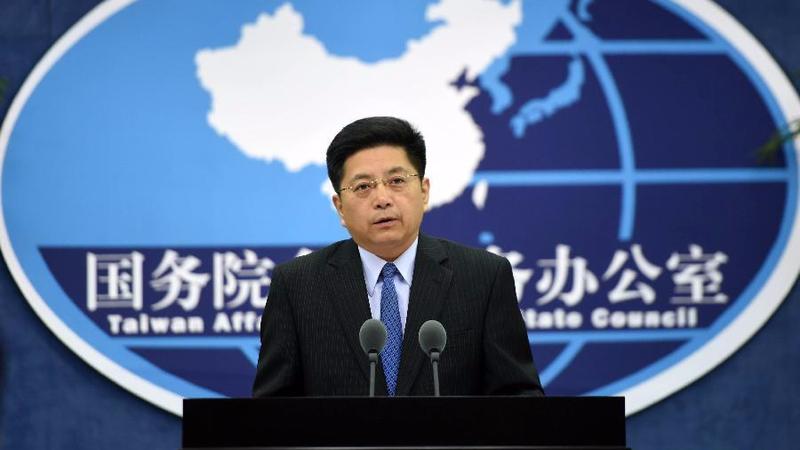 BEIJING - China firmly opposes any forms of official and military ties between the US and Taiwan, a mainland spokesperson said Wednesday.

Ma Xiaoguang, the spokesperson for the Taiwan Affairs Office of the State Council, made the remarks at a press conference in response to media reports that the American Institute in Taiwan (AIT) confirmed active military personnel have been stationed at the AIT since 2005.

The US should honor its commitments, correct its wrongdoing, abide by the one-China principle and the three China-US joint communiques, exercise caution and prudence when handling Taiwan-related issues to avoid serious damage to China-US relations and cross-Straits peace and stability, Ma said.

The Democratic Progressive Party, for the sake of its own interest, has tried to obstruct and restrict cross-Straits exchanges and cooperation through various means

"We oppose any forms of military exercises and the development of military relations between the US and Taiwan. This position is consistent and clear," said Ma while being asked to comment on media reports that the US plans to deploy air defense missile in Taiwan.

Foundation for Taiwan to participate in WHA no longer exist

By rejecting the 1992 Consensus that embodies the one-China principle, the DPP authorities damaged the political foundation of cross-Straits relations, Ma said.

A spokesperson of the World Health Organization has responded to a Taiwan media request saying that Taiwan will not be invited to this year's WHA if there will be no cross-Straits understanding.

Taiwan's participation in activities held by international organizations must be under the one-China principle and through cross-Straits consultations, Ma added.

From 2009 to 2016, Taiwan participated in the WHA with observer status as "Chinese Taipei," but has not been invited since 2017, when the DPP took power.

Ma also criticized the DPP administration and "Taiwan independence" separatist elements, saying they are opposed by people from both sides of the Taiwan Straits.

"They are doomed to be alone in the face of the pressure of their own action," said Ma.

For some time now, the DPP administration and separatist elements advocating "Taiwan independence" have repeatedly made remarks full of the false "two states" theory.

"They have escalated provocations and creates disturbances," he added.

The DPP administration and separatist elements have been seeking foreign intervention while threatening the people of Taiwan at home, which are opposed unanimously by people across the Straits, he noted.

Ma also said Taiwan authorities' attempts to restrict and obstruct cross-Straits exchanges show that they take no account of the wellbeing of people from Taiwan.

"The Democratic Progressive Party, for the sake of its own interest, has tried to obstruct and restrict cross-Straits exchanges and cooperation through various means, and turned these into political issues," said Ma.

Ma made the remarks when asked to comment on the attacks of politicians from Taiwan, on mayors and county chiefs who visited the mainland. "They were in the mainland out of the needs of their people and to seek opportunities for their people."

Guided by the conviction that people across the Straits are all of the same family, the mainland will continue to promote exchanges between cities across the Straits and expand the benefits and sense of fulfillment of compatriots from Taiwan, he said.

Young people 'won't be scared away'

He added that young people from Taiwan will not be scared away by Taiwan's authorities' attempt to obstruct cross-Straits exchanges and spread disinformation about the mainland.

More than 10,000 young people from Taiwan have attended internships, found jobs and started their own business in 76 industrial incubators specially for cross-Straits startups since 2015, Ma said.

The number of young people from Taiwan, who attended college, took internships and found jobs in the mainland, reported double-digit growth in 2018, he said.

When commenting on two residents from Taiwan fined by the island's authorities for taking jobs at community centers on the mainland, Ma said such moves threatened young people with legal action and deprived them off career opportunities.

"It will not end well for Taiwan's authorities that make themselves the enemy of the young," Ma said.

Ma also said the DPP administration over a period of time had made repeated attempts to make political use of the African swine fever epidemic prevention and control to further undermine mainland-Taiwan ties.

The information on the African swine fever outbreak has always been released in a timely, open and transparent manner, Ma said.

He said the mainland has maintained close cooperation and smooth channels for exchanges of information on the disease with the World Organization for Animal Health.

The Taiwan side can fully obtain complete information if it wants to understand the situation, according to the mainland spokesman.