Blazes break out as Australians take shelter from intense fires 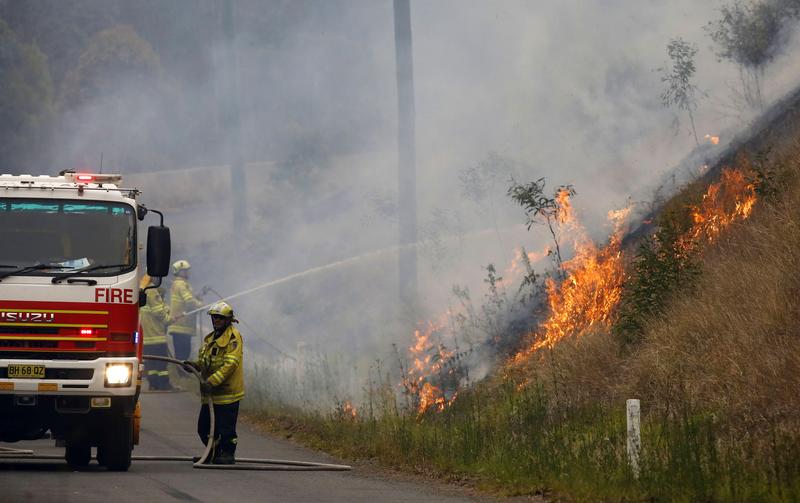 In Monday, Nov 11, 2019, photo, firefighters work on a controlled burn in Koorainghat, New South Wales state, Australia. Hundreds of schools remained closed across Australia's most populous state on Nov 12, and residents were urged to evacuate woodlands for the relative safety of city centers as authorities braced for extreme fire danger. (DARREN PATEMAN / AAP IMAGES VIA AP)

SYDNEY — Tens of thousands of Australians took shelter on Tuesday after authorities warned it was too late for them to leave their homes as bushfires raged across a vast area of the country’s east coast.

Officials issued 14 emergency warnings in New South Wales (NSW), each covering several communities, by late afternoon as more than half the 78 fires across the state burned uncontrolled amid “catastrophic” conditions.

A fire that erupted in Sydney’s northern suburbs in the late afternoon immediately cut off exit routes for some residents, a sign of the intensity of blazes erupting in tinder-dry bush.

“This will only worsen throughout the afternoon as the weather conditions continue to deteriorate, and particularly those strong winds strengthen"

“This will only worsen throughout the afternoon as the weather conditions continue to deteriorate, and particularly those strong winds strengthen,” he said.

Fitzsimmons said in an afternoon update a firefighter battling a blaze had suffered a heart attack, although his condition was unknown.

Bushfires are a common and deadly threat in Australia’s hot, dry summers but the ferocity and early arrival of this year’s outbreak in the southern hemisphere spring has caught many by surprise.

Blazes have been spurred by extremely dry conditions after three years of drought in parts of NSW and Queensland, which experts say has been exacerbated by climate change.

The current outbreak, which killed three people and destroyed more than 150 homes at the weekend, has been fanned by an unprecedented combination of high temperatures and strong winds.

Most of the 14 emergency warnings issued by authorities on Tuesday, including the South Turramurra fire 20 km north of central Sydney, told affected residents they must seek cover and that it was too late to flee their homes.

In the small town of Wauchope, 400 km north of Sydney, residents moved hundreds of livestock to the central showground as fires approached.

“We have at least 350 horses, maybe more. They are still coming, we have cattle and sheep and chooks (chickens) and dogs and pigs, you name it,” said Neil Coombes, president of the Wauchope Show Society.

Coombes, who lives about 10 km outside town, said he would likely lose his home because it was in the anticipated path of the fire.

“My wife went home earlier and said, ‘is there anything you want me to get?’,” Coombes said.

“I said, ‘yes, I want you back here with me. If the house burns it burns but I can’t replace her’,” he said. 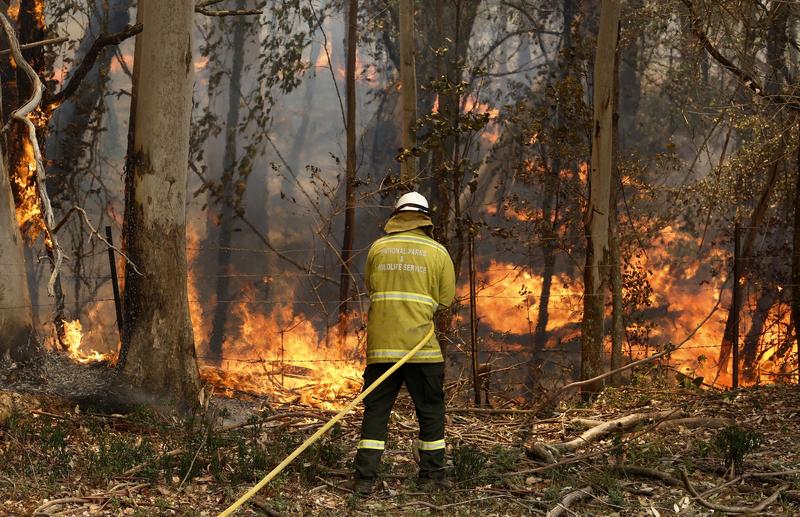 A National Parks and Wildlife crew member fights flames at Half Chain road at Koorainghat, near Taree in New South Wales state Nov 12, 2019. Hundreds of schools remained closed across Australia's most populous state on Nov 12, and residents were urged to evacuate woodlands for the relative safety of city centers as authorities braced for extreme fire danger. (DARREN PATEMAN / AAP IMAGES VIA AP)

The worst of the weather was not expected until later in the afternoon and through the evening, with temperatures forecast to reach 37 degrees Celsius, along with strong winds.

Seeking to avoid further deaths, firefighters in both NSW and Queensland state have been given broad powers under a seven-day state of emergency to control government resources, force evacuations, close roads and shut utilities.

In Sydney, home to five million people, health authorities urged people with respiratory issues to stay indoors because the city was covered by a “hazardous” smoky haze. Around 600 schools and colleges were closed across the state.

“Safety is first and we need to evacuate to get the children out of there,” Mitchell told the Australian Broadcasting Corporation.

The fires also forced organisers to cancel the season-ending Rally of Australia, which pitted Hyundai against Toyota.

The danger was not quite as great in Queensland. The threat level there was pegged at “severe”, two levels below the “catastrophic” conditions in NSW. Still, some 55 fires were burning across the northern state on Tuesday afternoon.

The current threat has sharpened attention on the policies of Australia’s conservative government to address climate change, which meteorologists have said was extending the length of the fire weather season.

Prime Minister Scott Morrison, a vocal supporter of Australia’s coal industry, has declined to answer questions about whether the current fires were a result of climate change. 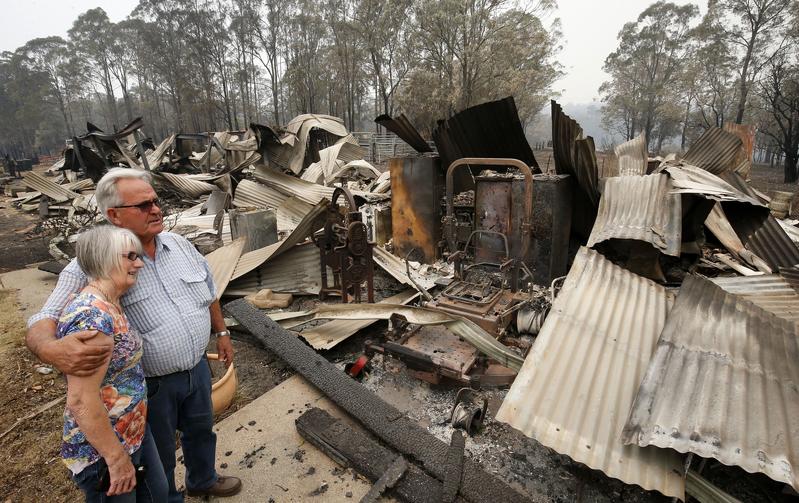 In Monday, Nov 11, 2019, photo, Lyn and Peter Iverson watch their burnt out office and shed on their property following a bushfire at Half Chain road, Koorainghat, New South Wales state. Hundreds of schools remained closed across Australia's most populous state on Tuesday, Nov. 12, and residents were urged to evacuate woodlands for the relative safety of city centers as authorities braced for extreme fire danger. (DARREN PATEMAN/AAP IMAGES VIA AP)

“The government says this isn’t the time to talk about climate change - I completely disagree, we should have been talking about this years ago,” said Carol Sparks, the mayor of Glen Innes, north of Sydney, where two people were killed at the weekend.

“We are overwhelmed with the intensity of this fire and climate change is responsible,” she said.