By Kelum Shivantha In Ethulkotte, Sri Lanka And Prime Sarmiento In Hong Kong 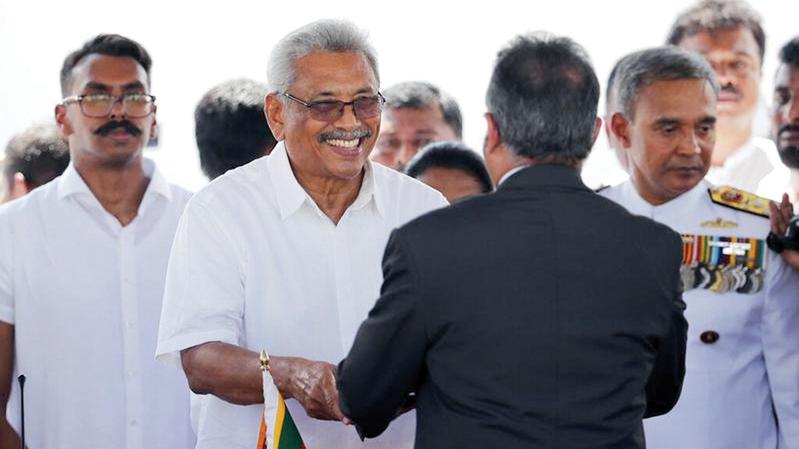 Sri Lanka has undergone a major change in its political landscape with the swearing-in on Nov 18 of a new president who won a closely fought election in the South Asian island nation.

Gotabaya Rajapaksa, the presidential candidate of the Sri Lanka Podujana Peramuna, or SLPP, took the oath of office at the Ruwanweli Seya Buddhist temple that was part of the ancient kingdom of Anuradhapura in north-central Sri Lanka.

In an address to the nation, Rajapaksa pledged to make national security a priority and to follow a neutral foreign policy. Analysts said economic issues may also be high up on the agenda of Rajapaksa, whose brother Mahinda Rajapaksa also served as president.

“There’s a strong anti-incumbency vote,” said Ahilan Kadirgamar, a political economist and senior lecturer at the University of Jaffna. The slowing economy and the Easter terrorist attacks of this year had combined to push the Sri Lankan electorate to vote for the opposition SLPP, Kadirgamar said.

Political commentator and senior journalist Kusal Perera said there was now a total change in the political landscape with the presidential election. “The equation at the apex of the new political regime seems to have reversed,” he said.

Gotabaya Rajapaksa, a retired lieutenant colonel, secured 52.25 percent of the votes cast in the election on Nov 16, which delivered the country’s seventh executive president. He becomes the first former military officer to attain that office.

Chulanee Attanayake, a visiting research fellow at the Institute of South Asian Studies at the National University of Singapore, told China Daily: “Promoting national security is his key policy, because that’s what he promised during his campaign.

“This is a personal challenge for Rajapaksa. He is known for being a doer, who can deliver what he promised. He has a reputation for thinking out of the box.”

Born in 1949, he is one of the nine Rajapaksa brothers who came to dominate Sri Lankan politics for more than a decade. Their father was also a politician, serving as an MP and cabinet minister.

Gotabaya Rajapaksa joined the army in 1971 and throughout his 20-year military career fought in several major offensives in the Sri Lankan civil war. He led the defeat of the Tamil Tigers and ended the 25-year conflict.

After retiring in 1992, he stayed in the United States for more than a decade but returned in 2005 to assist Mahinda’s presidential campaign. Gotabaya Rajapaksa served as defense secretary from that year until 2015.

“Terrorism is a global problem and Sri Lanka suffered from (nearly) three decades of terrorism,” Attanayake said. “The Easter Sunday attack was a wake-up call not only for Sri Lanka but for the rest of the world. Terrorism has changed form and it will (remain a) challenge for Sri Lanka.”

Perera said the election has left in its wake a heavily polarized society. The poll results leave the main minority groups, Tamils and Muslims, as outsiders in a Sinhala Buddhist-dominated Sri Lanka.

Kelum Shivantha is a freelance journalist for China Daily.