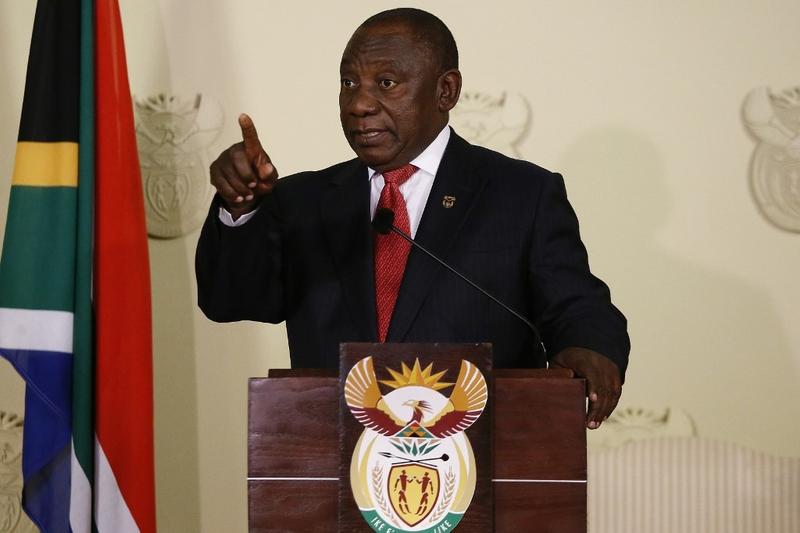 South African President Cyril Ramaphosa gestures moment before announcing the composition of the national executive at the Union Buildings on May 29, 2019 in Pretoria, South Africa. (PHILL MAGAKOE / AFP)

PRETORIA/JOHANNESBURG — South Africa’s President Cyril Ramaphosa on Wednesday retained Tito Mboweni as finance minister in a new, leaner cabinet, following on from a pre-election pledge to reform and revive an ailing economy and attract foreign investors.

Ramaphosa, who was sworn in as South Africa’s president on Saturday for his first full five-year term, trimmed the cabinet from 36 ministers to 28.

That will serve as an early barometer of his ability to push through change more efficiently, having struggled to implement tough reforms since he succeeded scandal-plagued Jacob Zuma last year.

“All South Africans are acutely aware of the great economic difficulties our country has been experiencing and the constraints this has placed on public finances,” he said in a televised national address.

“It is therefore imperative that in all areas and spheres of government, we place priority on revitalizing our economy while exercising the greatest care in the use of public funds.”

Analysts described Ramaphosa’s cabinet picks as a market-friendly outcome that maintains important allies in key ministries while sidelining some top officials in the ruling African National Congress accused of corruption and mismanagement.

“In all, the cabinet appointments announced tonight speak of a new confidence in the Ramaphosa administration,” said Razia Khan, chief Africa economist at Standard Chartered Bank.

“Should this momentum and seemingly new-found confidence be built on with the pursuit of further structural reform, then markets would be correct to react positively.”

Some analysts, however, expressed concern over the number of deputy ministers, which remained at above 30.

“Trimming the size of cabinet by the size he did is a strong message, but creating so many deputy ministries is a problem. So no, it’s not enough yet,” said Ralph Mathekga, an independent political analyst.

The immediate task of the new cabinet will be to help Ramaphosa revive Africa’s most industrialized economy and preserve its last investment-grade credit rating.

Ramaphosa’s long to-do list also includes generating jobs, acting against entrenched corruption in and outside the ANC, resolving policy uncertainty in the mining sector and speeding up reforms of power utility Eskom and other state-owned entities.

Markets are likely to welcome the reappointment of Mboweni, a former central bank governor who is well respected by investors. He was first appointed to the finance ministry in October and has spoken out about trimming government spending and selling some state companies that are acting as a drain on public finances.

Ramaphosa’s decision not to re-appoint some senior ANC figures who have been tainted by scandal is also expected to win praise from investors. They include the former minister for women, Bathabile Dlamini, who serves as president of the ANC women’s league and is considered a staunch ally of Zuma. She has denied any wrongdoing.

But investors will scrutinize Ramaphosa’s decision to retain David Mabuza as deputy president.

Last week, Mabuza had requested a delay in his swearing-in to parliament to clear his name before an ANC integrity commission, following allegations of impropriety during his decade-long premiership of the mineral-rich eastern Mpumalanga province. He too has denied all wrongdoing.

Mabuza was finally sworn in on Tuesday after he was cleared by the ANC of bringing the party into disrepute, weakening the rand.

The currency extended its losses early on Wednesday, in part reflecting worries that Mabuza could taint Ramaphosa’s reform agenda, but recovered in late trade after the cabinet announcement.

Ramaphosa kept on Pravin Gordhan as public enterprises minister. The ministry oversees state-owned companies including Eskom. The management of Eskom’s restructuring is key to reviving the economy after power cuts in the past year undermined broader efforts to kick-start growth. 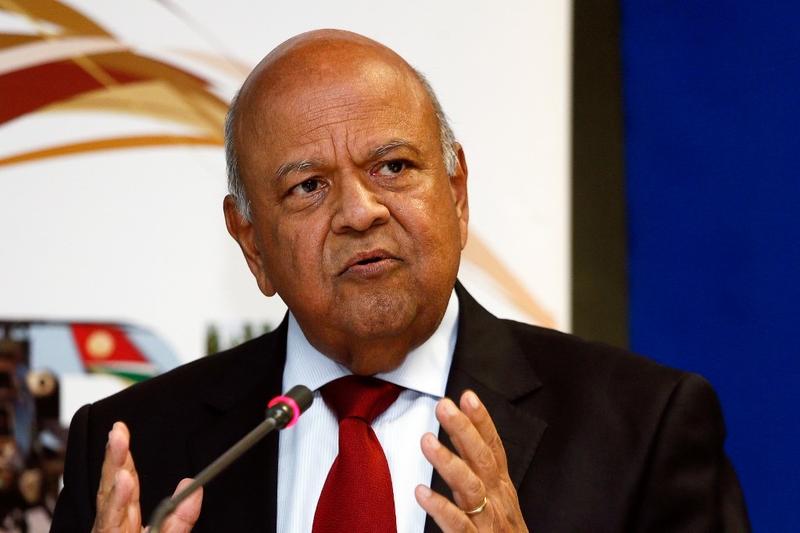 South African Minister of Enterprise Pravin Gordhan, speaks during a press conference to update on the current status of electricity supply during a visit at the Lethabo Power Station on April 3, 2019 in Sasolburg, South Africa. (PHILL MAGAKOE / AFP)

His appointment is, however, likely to face criticism from opposition parties after the country’s anti-graft watchdog found Gordhan acted improperly in granting an early pension payout to a revenue service executive when he was finance minister. Gordhan is challenging the findings in court.

Half of the new cabinet are women, making South Africa one of three African countries with Rwanda and Ethiopia to achieve gender parity among ministers, according to UN Women.