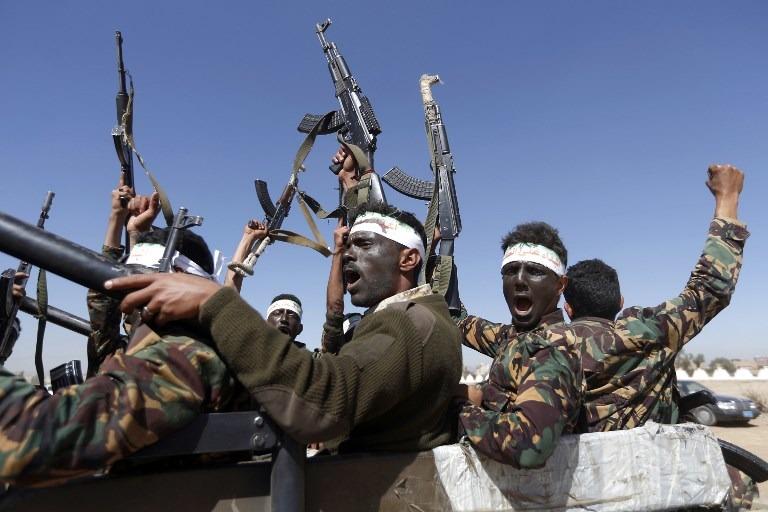 Newly recruited Houthi fighters chant slogans as they ride a military vehicle during a gathering in the capital Sanaa to mobilize more fighters to battlefronts to fight pro-government forces in several Yemeni cities, on Jan 3, 2017. (MOHAMMED HUWAIS / AFP)

Saudi Energy Minister Khalid al-Falih said in a statement sent by his ministry that the Houthis had attacked two Saudi Very Large Crude Carriers (VLCCs) in the Red Sea on Wednesday morning, one of which sustained minimal damage.

Yemen, where a Saudi-led coalition has been battling the Houthis in a three-year war, lies beside the southern mouth of the Red Sea, one of the most important trade routes in the world for oil tankers. The tankers pass near Yemen's shores while heading from the Middle East through the Suez Canal to Europe.

The Saudi coalition intervened in Yemen's civil war in 2015 to restore the internationally recognised government of exiled president Abd-Rabbu Mansour Had. Saudi Arabia accuses regional arch-foe Iran of supplying missiles to the Houthis, which both Tehran and the Houthis deny.

The Western-backed coalition of Sunni Muslim states which Saudi Arabia leads launched an offensive in June to wrest Yemen's main port of Hodeidah from the Houthis in a bid to cut off the primary supply line of the movement, which holds the most populated areas of Yemen including the capital Sanaa.

Earlier this month, the alliance called a halt to the offensive to give UN efforts a chance to reach a political solution that would avert an assault on the port, a lifeline for millions of Yemenis. The United Nations fears an all-out assault on the port risks triggering a famine in the impoverished country.

Most exports from the Gulf that transit the Suez Canal and the SUMED Pipeline also pass through Bab al-Mandeb strait. An estimated 4.8 million barrels per day of crude oil and refined petroleum products flowed through this waterway in 2016 towards Europe, the United States and Asia, according to the US Energy Information Administration.

The Bab al-Mandeb strait, where the Red Sea meets the Gulf of Aden in the Arabian Sea, is only 20 km wide, making hundreds of ships potentially an easy target.

The ministry statement said both tankers that were attacked were operated by Saudi shipping company Bahri, which had earlier said that one of its VLCCs had suffered minor damage in an incident in the Red Sea, without elaborating.

"The two million barrels capacity for each tanker were full of crude oil cargo at the time and were headed for export. One of the VLCCs sustained minimal damage," Falih said.

"Fortunately, there were no injuries or oil spill that would have resulted in catastrophic environmental damage. Efforts are currently underway to move the damaged ship to the nearest Saudi port."

One of the coalition's main justifications for intervening in Yemen's war in 2015 was to protect shipping routes such as the Red Sea. It has said it foiled previous attacks there in April and May.

The Houthis, who have also launched missile attacks on Saudi cities, including the capital Riyadh, have threatened to block the strait of Bab al-Mandeb several times to force the coalition to stop its air strikes

The coalition said in a statement carried by Saudi state media on Wednesday that the Houthi movement had attacked one oil tanker west of Yemen's Hodeidah port, but did not name the vessel or describe how it was attacked.

"Thankfully the attack failed due to immediate intervention of the Coalition's fleet," it said without providing details.

The Houthis' Al Masirah TV had said on Twitter that they had targeted a warship named the Dammam off the western coast of Yemen in what the group later said was a missile attack.

In a separate statement carried on the Houthi-run SABA news agency, the group said it had also targeted a coalition frigate off the coast of al-Durayhmi in southern Hodeidah.

The Houthis, who have also launched missile attacks on Saudi cities, including the capital Riyadh, have threatened to block the strait of Bab al-Mandeb several times to force the coalition to stop its air strikes.

On Thursday, Houthi leader Mohammed Ali al-Houthi said the group's navy had the capacity to reach the high seas and Saudi ports.

"(But) we were taking into consideration to keep the navigation through Bab al-Mandeb safe, and to not provide the aggression forces an excuse that the waterway is under threat," al-Houthi said in a post on twitter.

The coalition has carried out a campaign of thousands of air strikes and restricted imports into Yemen, worsening what the United Nations says is potentially the world's worst humanitarian crisis.