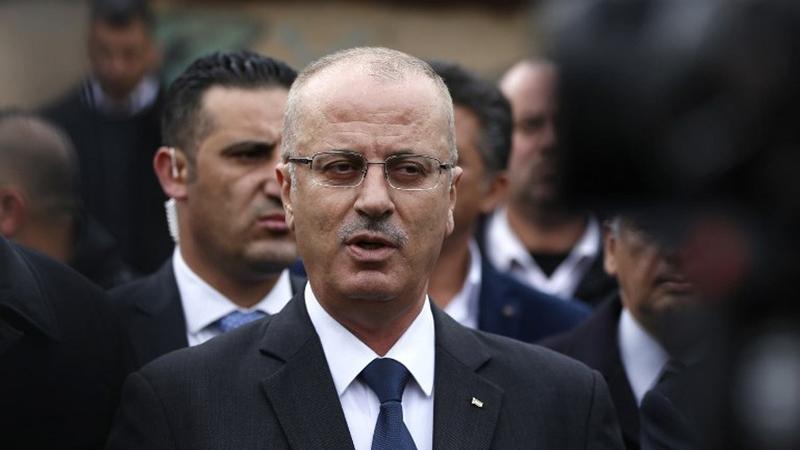 RAMALLAH — Palestinian Prime Minister Rami Hamdallah said on Monday that the current US government has become an accomplice in Israeli occupation of the Palestinian land and the destabilization of the region.

The Palestinians will not accept "waiving their national standards in exchange for any political price," Prime Minister Rami Hamdallah said

He said the "Deal of Century" by the United States is a "blackmail" to the Palestinian leadership since it has recognized Jerusalem as Israel's capital and has been working on "schemes alongside Israel to liquidate the Palestinian cause, mainly the Palestinian people's right to liberation, return and self-determination."Hamdallah made the remarks during the opening ceremony of a new hospital in the West Bank city of Bethlehem.

Hamdallah highlighted the Palestinian leadership's rejection to the "American blackmail and any decision by Washington because it is no longer a peace partner."

The Palestinians will not accept "waiving their national standards in exchange for any political price," he added.

The US government under President Donald Trump on Friday declared the deduction of more than US$200 million for Palestinians aid in the Gaza Strip and the West Bank.

A senior US State Department official said the funding previously allocated for programs in the West Bank and the Gaza Strip will "now address high priority projects elsewhere."

Besides, recent reports said the Trump administration is seeking a new legislation to limit the US aid to Palestinian refugees born before 1948, excluding their decedents, who are estimated at nearly five million.

Since the Arab-Israeli war of 1948, refugees have been driven out of their homes in what is now Israeli territory and have never been allowed back.

Hamdallah said the current priority for Palestinians is the national reconciliation with Hamas, urging the Islamic movement to "put the interests of the citizens and their needs first and allow the government to work in Gaza."