US, Iran both appear to signal desire to avoid further conflict 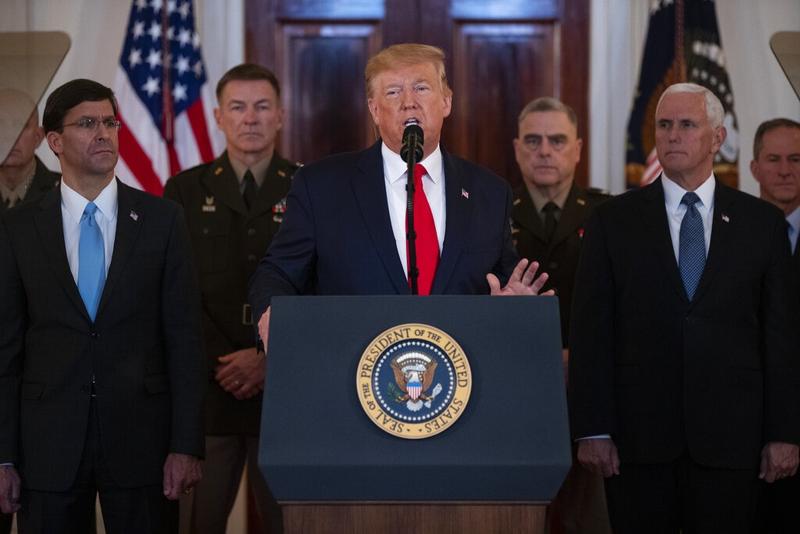 US President Donald Trump, center, addresses the nation from the White House in Washington on Jan 8, 2020, a day after the ballistic missile strike that Iran launched against Iraqi air bases housing US troops. (EVAN VUCCI / AP)

WASHINGTON/BAGHDAD/DUBAI - US President Donald Trump on Wednesday tempered days of angry rhetoric and suggested Iran was "standing down" after it fired missiles at US forces in Iraq overnight, as both sides looked to defuse a crisis over the US killing of an Iranian general.

Trump said the United States did not necessarily have to hit back at Iran's attack on military bases housing US troops in Iraq, itself an act of retaliation for the Jan 3 US strike that killed Iranian commander Qassem Soleimani.

Trump said no Americans were hurt in the overnight attacks.

The Pentagon said Iran had launched 16 short-range ballistic missiles, at least 11 of which hit Iraq's al-Asad air base and one that hit a facility in Erbil but caused no major damage.

"Our great American forces are prepared for anything. Iran appears to be standing down, which is a good thing for all parties concerned and a very good thing for the world," he said.

Trump did not directly threaten military action but said the United States "will immediately impose additional punishing economic sanctions on the Iranian regime" in response to what he called "Iranian aggression." He offered no specifics.

Iranian Supreme Leader Ayatollah Ali Khamenei, addressing a gathering of Iranians chanting: "Death to America," said the missile attacks were a "slap on the face" of the United States and said US troops should leave the region.

Iranian Foreign Minister Mohammad Javad Zarif had said the strikes "concluded" Tehran's response to the killing of Soleimani, who built up Iran's network of proxy armies across the Middle East. He was buried in his hometown, Kerman, after days of national mourning.

"We do not seek escalation or war, but will defend ourselves against any aggression," Zarif wrote on Twitter.

Influential Iraqi Shi'ite cleric Moqtada al-Sadr, who casts himself as a nationalist rejecting both US and Iranian interference in Iraq, also said the crisis Iraq was experiencing was over and he urged militia groups not to carry out attacks.

"I call on the Iraqi factions to be deliberate, patient, and not to start military actions,," said Sadr, whom Washington has long regarded as an Iranian ally.

US Vice-President Mike Pence told CBS News in an interview that the United States was receiving "encouraging intelligence that Iran is sending messages" to its allied militias not to attack US targets.

But Army General Mark Milley, chairman of the US Joint Chiefs of Staff, said he and others in the military "fully expect" Shi'ite militia groups in Iraq, backed by Iran, to carry out attacks against US and US-led forces in Iraq and Syria. 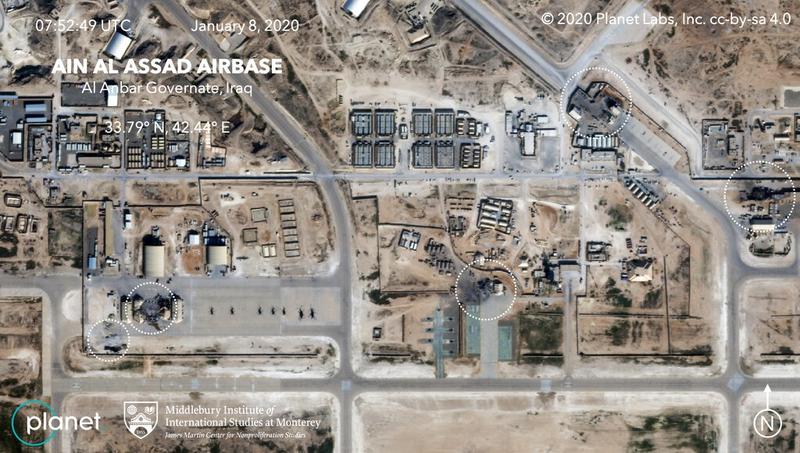 This satellite image provided on Jan 8, 2020, by Middlebury Institute of International Studies and Planet Labs Inc shows damage caused from an Iranian missile strike at the Ain al-Asad air base in Iraq. (PLANET LABS INC / MIDDLEBURY INSTITUTE OF INTERNATIONAL STUDIES VIA AP)

Two rockets fell on Wednesday in Baghdad's heavily fortified Green Zone, causing no casualties, the Iraqi military said. There was no immediate claim of responsibility.

In a letter to the United Nations Security Council on Wednesday, US Ambassador Kelly Craft said the killing of Soleimani was self-defense and vowed to take additional action "as necessary" in the Middle East to protect US personnel and interests.

The United States also stood "ready to engage without preconditions in serious negotiations with Iran," to maintain peace and security, she said.

US Democratic lawmakers and some Republicans said administration officials had not provided evidence in classified briefings to back up Trump's assertion that Soleimani had posed an "imminent" threat to the United States.

House of Representatives Speaker Nancy Pelosi said the Democratic-led chamber would vote on a resolution intended to limit his military actions against Iran.

The Republican, who was impeached in December and faces an election in November, had vowed to respond "disproportionately" if Iran retaliated strongly against Soleimani's killing.

Trump said on Saturday the United States had targeted 52 Iranian sites, including ones important to the country's culture. He was criticized for that even by US political allies and later backtracked, saying the United States would obey international law on the issue.

On Wednesday, Trump again vowed he would not allow Iran to obtain a nuclear weapon and urged world powers to quit a 2015 nuclear accord with Iran that Washington abandoned in 2018 and work for a new deal, an issue at the heart of rising tensions between Washington and Tehran. Iran has rejected new talks.

Iran's ambassador to the United Nations dismissed as "unbelievable" what he said was Trump's call for cooperation given Washington was imposing sanctions on Tehran, Iran's state news agency IRNA reported on Thursday.

The new head of Iran's Quds Force, Brigadier General Esmail Ghaani, said he would continue the course pursued by his predecessor, noting that Iranian missile strikes carried out on US targets at a base in Iraq on Wednesday would eventually drive America out of the region.

Earlier, the semi-official Fars news agency described the US president's remarks as a "big retreat from threats."

Soon after Wednesday's attacks, Trump had said on Twitter that "All is well!" and Washington was assessing damage.

That tweet and the comment by Iran's foreign minister eased some concerns about a wider war and calmed jittery financial markets. US stock prices hit record highs before paring their gains, while world oil prices, after an early spike, fell about four percent.

US and European government sources said they believed Iran had deliberately sought to avoid US military casualties in its missile strikes to prevent an escalation.

But an Iranian army spokesman denied "foreign media reports" suggesting there was some kind of coordination between Iran and the United States before the attack to evacuate bases.

Iranian state television said Iran had fired 15 ballistic missiles from its territory at US targets in Iraq.

Iranian television reported an official in the supreme leader's office as saying the attacks were the "weakest" of several retaliation scenarios. It quoted another source saying Iran had lined up 100 other potential targets.

Milley said he believed Iran's strikes "intended to cause structural damage, destroy vehicles and equipment and aircraft and to kill personnel. That's my own personal assessment."

After the Iranian missile attack, Iranian state television showed footage of the Soleimani burial, with hundreds of people chanting: "God is greatest" when the strikes were announced over loudspeakers. "His revenge was taken and now he can rest in peace," Iranian television said.

Hours after the Iranian missile strike, a Ukrainian airliner crashed shortly after takeoff from Tehran on Wednesday, killing all 176 people on board. A Canadian security source said Western intelligence agencies' initial assessment was that the plane was not brought down by a missile.