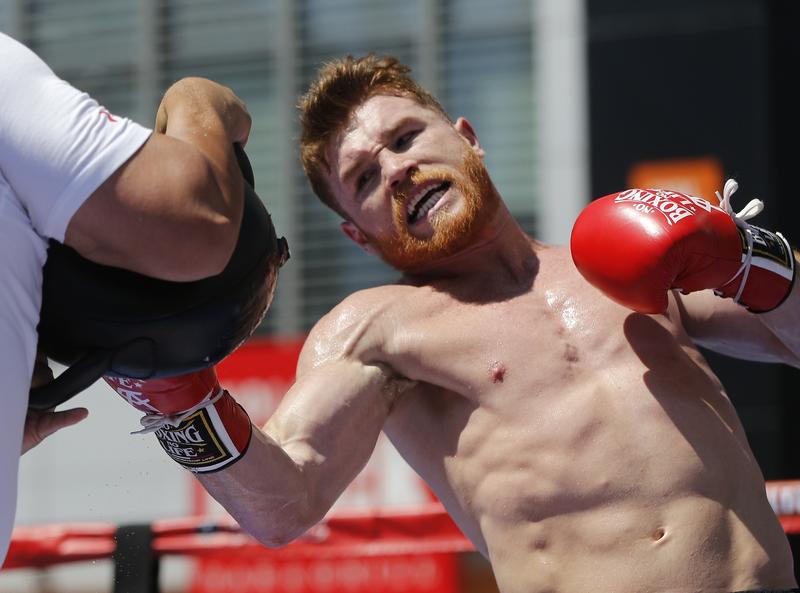 In this Aug 28, 2017, photo, boxer Canelo Alvarez works out as he hosts an open-to-the-public media workout at LA LIVE in Los Angeles. (DAMIAN DOVARGANES / AP)

SAN DIEGO — Canelo Alvarez is getting his hands wrapped for training when he cocks his head and makes a kissing noise. In a stroller across the gym, his baby daughter's face positively lights up at the sound.

"This is my biggest fight, and this is starting a new chapter, a second chapter in my career"

Alvarez is deep in the final weeks of work before he meets Gennady Golovkin on Sept 15 in a middleweight title rematch. It's the most compelling fight of the year and the possible culmination of a sports rivalry that has turned into a bitter personal grudge.

Alvarez's suspension for failing two drug tests earlier this year is the primary source of this animus. It's the reason the fight was postponed four months, costing both fighters untold millions, and it's the reason the Mexican champion has been out of the ring for the longest stretch in his 13-year professional boxing career.

But in the tranquility of Alvarez's training gym in an office park set on the gently rolling hills of suburban San Diego, with only his smiling daughter and his retinue for an audience, Alvarez doesn't fixate on the caustic words thrown his way constantly by Golovkin's camp, or ponder the loss of any fans whose faith in him waned. 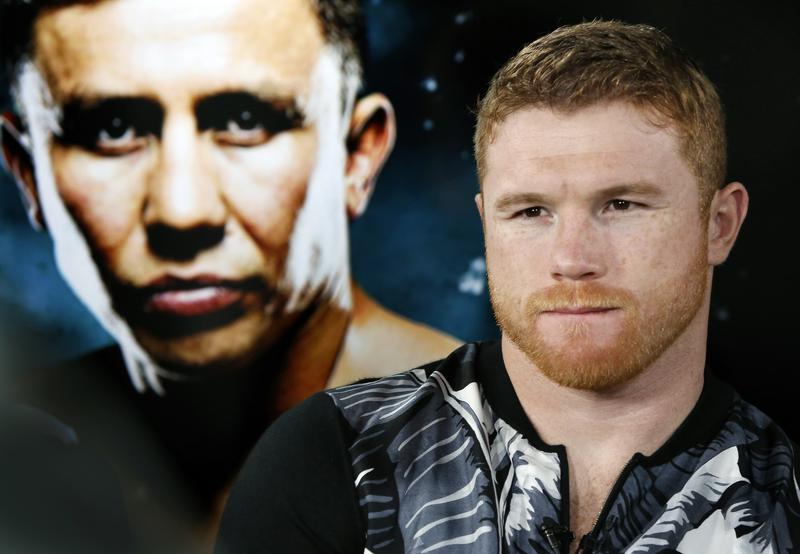 In this June 20, 2017, photo, Canelo Alvarez sits beside a giant photograph of his upcoming opponent, Gennady Golovkin, during an interview in New York. (KATHY WILLENS / AP)

"This is my biggest fight, and this is starting a new chapter, a second chapter in my career," Alvarez said. "It's going to be a big victory for me, and I'm going to come out of it with a new energy."

Alvarez goes through a workout both crisp and familiar, with trainer Eddy Reynoso monitoring each move.

Chepo Reynoso, Eddy's father and the veteran boxing trainer who now manages Alvarez's career, smiles at the familial vibe, along with the loving interplay between the fighter and his daughter.

"When so many (bad) things happen, you become immune," Reynoso said. "Venom doesn't kill you. It fortifies you."

After making what he insists was an inadvertent mistake by eating tainted meat in Mexico, Alvarez is determined to reassert his supremacy, and to reclaim his reputation. He acknowledges the correctness of his punishment, but he's also eager to reach a point when he isn't talking about it every day.

Suspensions end, and fights must go on. The redheaded former teenage prodigy who grew to become a father and a champion is moving forward.

Alvarez and Golovkin fought to a split draw last year in that rarest of boxing matchups: A showdown between two elite fighters near the peak of their powers. Golovkin, who felt he had won, still reached an apex of his late-blooming career after lobbying for years to get a fight with the Mexican superstar.

Alvarez knew the fight was close, but he clearly benefited from having a true rival and equal in the ring. The rematch, set for May 5, was a natural for both — but then Alvarez tested positive for clenbuterol in February. 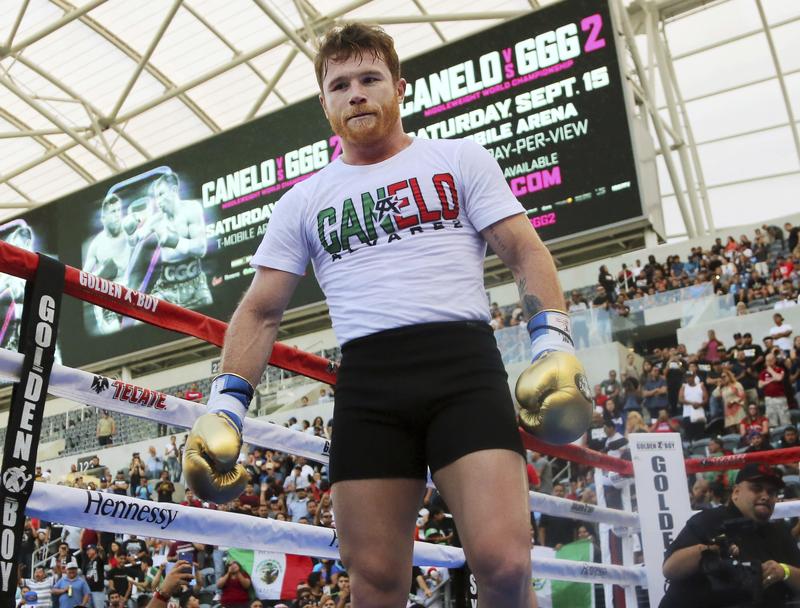 In this Aug 26, 2018, photo, middleweight Canelo Alvarez appears at a public workout at Banc of California Stadium in Los Angeles. (REED SAXON / AP)

Alvarez withdrew from the bout, which was only rescheduled after months of negotiations and a reconfiguring of the financial terms. All the while, Golovkin and his trainer, Abel Sanchez, lobbed increasingly vicious verbal assaults at Canelo's camp, believing Alvarez had knowingly cheated.

Two fighters who once trained together in Big Bear are no longer friendly enough to stand together on stage at their public workout in Los Angeles last weekend. Alvarez is fed up with the criticism, feeling it goes beyond normal fight promotion theatrics.

When asked at the public workout if he would shake Golovkin's hand in sportsmanship after their bout, Alvarez said: "For me, it's very difficult, especially after all the things that have been said, all the offensive claims. That's going to be very hard for me. I don't know."

In a separate interview a few minutes later, Golovkin said Alvarez is "not a champion" and "a liar."

But while the fight promotion is dominated by bad feelings and verbal fireworks, Alvarez is studiously training in San Diego. Eddy Reynoso wants his fighter to throw more punches in the rematch while still avoiding a slugfest that could make both fighters vulnerable to a knockout.

"We're going to keep the defense, but be more active," Reynoso said. "He's going to throw better combinations, and he's going to think about counterpunching much better. We've been working on it every day. When Golovkin throws punches and misses, that's when Canelo needs to stop him." 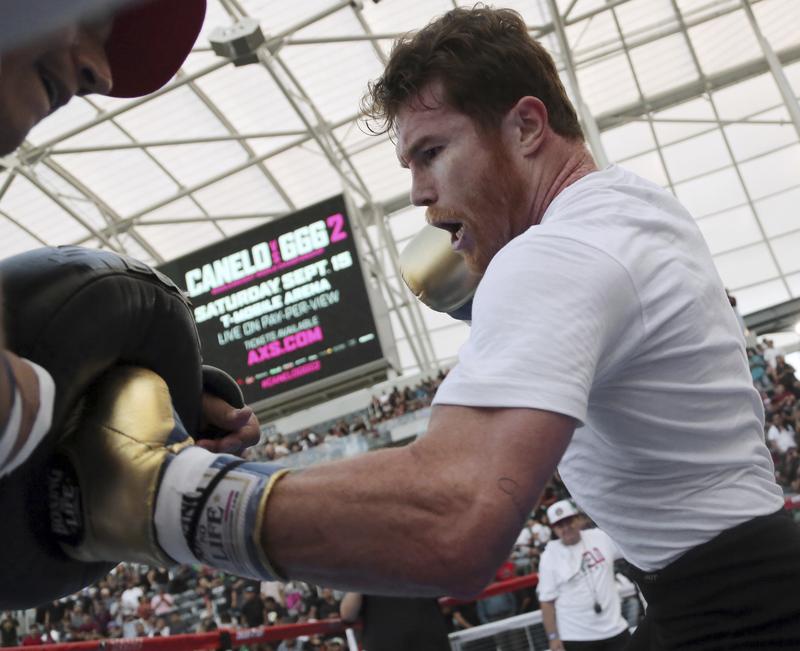 In this Aug 26, 2018, photo, middleweight Canelo Alvarez appears at a public workout at Banc of California Stadium in Los Angeles. (REED SAXON / AP)

Alvarez also got a benefit from his lengthy absence from the ring: He was able to have knee surgery in April to remove a cyst that had annoyed him last year.

Not everything in camp is going perfectly: At the training session earlier in August, Eddy Reynoso proudly showed off his custom-made gloves — called "No Boxing No Life" — that he intended to have Alvarez wear in the rematch. The Nevada Athletic Commission on Tuesday refused to allow the new gloves to be worn, saying they hadn't been adequately tested.

But Reynoso and Alvarez are determined to step in the ring in two weeks with a clear focus. The only path to redemption, Canelo feels, is through victory.

"Actions speak louder than words," Alvarez said. "Yeah, it bothers me, but I'm going to use it to energize me and motivate me and inspire me to go harder. They're going to understand all the fuel they gave me."