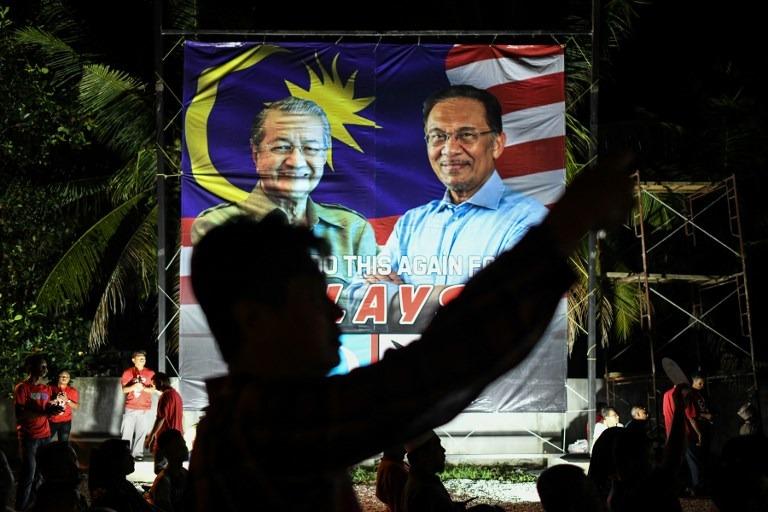 Scandal-hit Prime Minister Najib Razak, whose Barisan Nasional (BN) alliance has ruled Malaysia for more than six decades, is pitted in a duel against the charismatic duo, Anwar and Mahathir, who have joined forces to oust him.

Najib's alliance faces far greater risks this time than in any previous election, and analysts have warned a weak performance could trigger an internal revolt against the 64-year-old Najib.

"I urge you all to join the people's movement to demand for change," Anwar said in a statement late on Monday from a hospital in Kuala Lumpur, the capital, where he is recovering from a shoulder operation.

Though still serving his jail term, Anwar has been in hospital for the last few months. He began a five-year sentence for sodomy in 2015, on a charge he and his supporters say was politically motivated, and is expected to be released early on June 8.

Anwar, 70, was first jailed after Mahathir sacked him as deputy prime minister in 1998.

He then started a movement known as "Reformasi', or reform, aiming to end BN's race- and patronage-based governance. But Anwar was stopped in his tracks by charges of sodomy and graft, which he denied, but was jailed for.

In a dramatic change of heart, both leaders buried their feud in 2016, and agreed to join forces with the aim of unseating Najib.

Anwar said his partnership with Mahathir was the ruling party's "biggest worry".

"Mahathir has proven his tenacity, accepted past limitations, apologised and sacrificed his time and energy to raise the dignity of the people and the country," Anwar said. 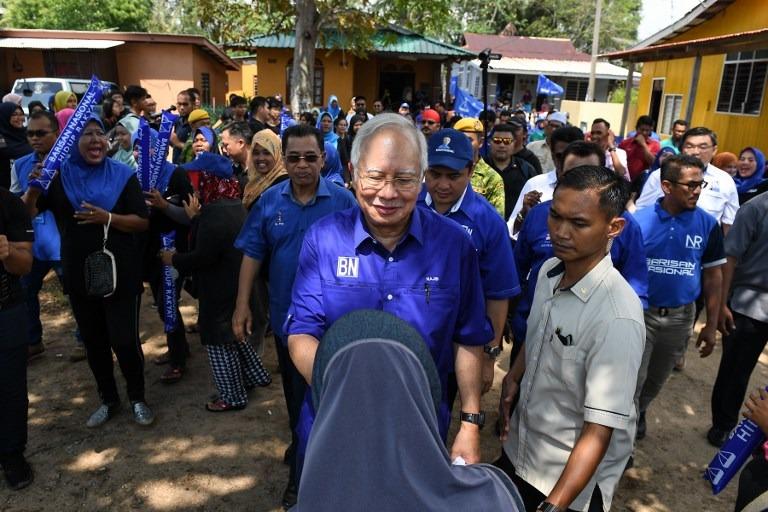 Malaysia's Prime Minister Najib Razak (center) shakes hands with his supporters during a campaign event ahead of the upcoming 14th general election in Pekan, Pahang on May 8, 2018. (MOHD RASFAN / AFP)

But in an interview on pro-government television late on Monday, Najib said he was confident of winning the election.

"Our political base is still strong and intact. That is why I am confident, because we actually have strength," said Najib, whose popularity has taken a hit from rising costs and a graft scandal at state fund 1Malaysia Development Berhad (1MDB).

Najib has consistently denied any wrongdoing over the billions of dollars allegedly siphoned off from the state fund, which he founded, and he has been cleared of any offence by Malaysia's attorney general.

Najib is set to broadcast live on state media at 1400 GMT. At the same time, Mahathir will livestream his speech from a rally in his constituency in Langkawi.

Our political base is still strong and intact. That is why I am confident, because we actually have strength

They will be the leaders' final speeches before polls open on Wednesday at 0000 GMT.

In the election runup, opposition leaders and civil society groups have complained that measures such as gerrymandering have tilted the poll in BN's favour.

The Human Rights Commission of Malaysia, SUHAKAM, on Tuesday urged the election panel to avoid actions seen as partisan and selective.

"SUHAKAM believes the level playing-field is affected with instances of questionable disqualification of candidates and money and gifts being distributed," it said in a statement.

On his blog, Najib said the electoral system was transparent, and urged election officials and volunteers to perform their duties with "responsibility".

Thousands of Malaysians began trips back to their home towns to vote, and overseas voters scrambled to get in postal ballots.

In Australia, hundreds of Malaysians gathered on Monday in Melbourne's city centre to hand postal ballots to volunteers preparing to fly them back to Kuala Lumpur before the deadline.

One volunteer, Yap Lee Jane, 23, said she was carrying about 100 ballots.

"This still doesn't guarantee my vote will be counted," said Mawar Ahmad Fadzil, a 31-year-old in Melbourne. "I just pray that the returning officer will accept hand-carried postal votes."