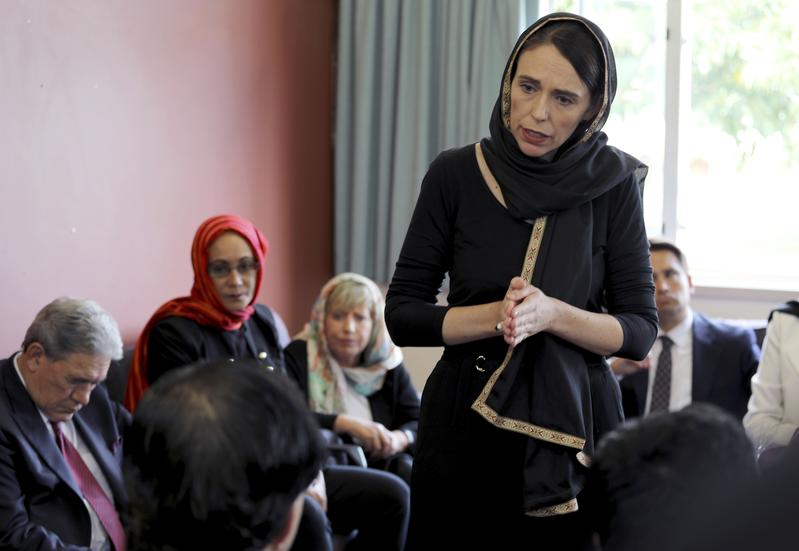 In this photo released by New Zealand Prime Minister's Office, Prime Minister Jacinda Ardern speaks to representatives of the Muslim community, March 16, 2019 at the Canterbury Refugee Centre in Christchurch, New Zealand, a day after the mass shootings at two mosques in the city. (PHOTO / NEW ZEALAND PRIME MINISTER OFFICE / AP)

CHRISTCHURCH/WELLINGTON — New Zealand PrimeMinister Jacinda Ardern said on Monday she would announce new gun laws within days, after a lone gunman killed 50 people in mass shootings at two mosques in the city of Christchurch.

Australian Brenton Tarrant, 28, a suspected white supremacist, was charged with murder on Saturday. Tarrant was remanded without a plea and is due back in court on April 5 where police said he was likely to face more charges.

"Within 10 days of this horrific act of terrorism we will have announced reforms which will, I believe, make our community safer," Ardern said at news conference after her cabinet reached in principle decisions on gun reform laws in the wake of New Zealand's worst ever mass shooting.

She said an inquiry will look at the lead up to attack and what might have been done differently.

Within 10 days of this horrific act of terrorism we will have announced reforms which will, I believe, make our community safer

The death toll from the massacre stands at 50, with another 50 people injured, after a gunman burst into a mosque and opened fire on worshippers with a semi-automatic rifle and high-capacity magazines, and then attacked a second mosque.

Ardern was the first signatory of a national condolence book for the worst peacetime mass killing in New Zealand that she opened in the capital Wellington on Monday.

"On behalf of all New Zealanders, we grieve together. We are one. They are us," she wrote in the book.

The shock of the attacks has led to calls for an immediate tightening of laws to restrict access to some firearms, particularly semi-automatic weapons such as the AR-15 rifle used by the shooter in Christchurch.

"What the public rightly are asking right now is why is it and how is it that you are currently able to buy military style semi-automatic weapons in New Zealand, and that's the right question to ask," Ardern told TVNZ earlier on Monday.

"There are ways we can bring in affective regulation of firearms that actually target those we need to target and that is our focus."

New Zealand, a country of only 5 million people, has an estimated 1.5 million firearms.

A Radio New Zealand report said more than 99 percent of people who applied for a firearms licence in 2017 were successful.

The report was based on police data secured through an Official Information Act request, although it was not clear who made the request as those details had been redacted.

In 2017, there were 43,509 firearm license applications, and only 188 applications were declined, the data showed.

After Ardern vowed at the weekend to change the gun laws, there were media reports that people were rushing to buy guns before any ban was implemented.

New Zealand's top online marketplace Trade Me Group said it was halting the sale of semi-automatic weapons in the wake of Friday's attack.

Under New Zealand gun laws, A-category weapons can be semi-automatic but limited to seven shots. Live-streamed video of a gunman in one mosque showed a semi-automatic weapon with a large magazine round.

The owner of the New Zealand gun store where Tarrant had bought weapons said on Monday that he had purchased them online from the store.

Ardern did not detail the new gun laws, but has said she supports a ban on automatic weapons following the Christchurch shootings.

Australia introduced some of the world's toughest gun laws after its worst mass killing, the 1996 Port Arthur massacre in which a lone gunman killed 35 people using a semi-automatic AR-15 - the same weapon used in the Christchurch massacre.

Ardern did not detail the new gun laws, but has said she supports a ban on automatic weapons following the Christchurch shootings

Australia banned semi-automatic weapons, launched a national gun amnesty in which tens of thousands of guns were handed in, and made it much tougher to own firearms.

Ardern encouraged gun owners who were thinking of surrendering their weapons to do so.

"The clear lesson from history around the world is that to make our community safer, the time to act is now," she said.

"I strongly believe that the vast majority of gun owners in New Zealand will agree with the sentiment that change needs to occur."

Police were out in force on Monday to assure Christchurch residents of their safety as they returned to their weekday lives, after a lockdown affected parts of the city on Friday after the shootings.

Police said the airport in the southern city of Dunedin, had been reopened early on Monday after a suspicious item found on the airfield turned out to be a hoax object.

And Australian police executed two search warrants in towns on the New South Wales mid-north coast related to the investigation.

Frustration was building among the families of victims as under Islam it is custom to conduct burials within 24 hours, but bodies will not be released until post mortems are carried out.

The burial process, which usually involves washing with three kinds of water, salving wounds and scrubbing skin, would be complicated, volunteers in Christchurch said.

Mo, a volunteer who had flown in from Brisbane to wash the bodies, said the people who died in the mosques were classified as martyrs. That meant there were different views as to whether they would be washed or not because he said Islamic jurisprudence said martyrs are not to be washed as their blood was witness to their martyrdom.

"But some people have said because it was not a battlefield it is okay to wash the body. But it is at the discretion of the family," said Mo. He asked to be identified by just one name.